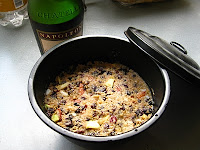 This is the third new post I've put up this weekend - but there won't be one this coming week, as I have visitors. Yesterday I set out to collect the ingredients for the Christmas pudding, meaning to mix it that afternoon and cook it today, but - no luck. These days the Shreddo suet doesn't appear on the supermarket shelves until a little before Christmas, and I was too early - they told me it would be arriving next week, and I won't have time to make it until the week after. (I guess I could go to the butcher, buy a lump of suet, and grate and flour it myself - but I won't.) They had no whole nutmegs, either. But I remembered that readers had asked for a Christmas Pudding Advisory when the time to make it came round again - so here it is. Here's the post with the recipe.
Posted by AnneE at 1:31 PM