As things change, we find we have to keep changing what we do at Christmas. With no family in Wellington, we used to follow a wonderful plan, introduced to us by dear friends. It involved a succession of guests and at least five well-spaced courses, appearing as people came and went according to their other commitments.  Doing it that way meant we could make Christmas dinner last all day. We still do it, but with adaptations.
Over the years a large roast of pork gave way to two ducks, and then to a fillet of beef. Last year I tried having the beef warm, with salads, instead of having everything hot, though I did hot spuds for Harvey, who unlike me does not enjoy potato salad. It was a fine day, fortunately, and it was much easier for me to manage. But Harvey admitted later that he missed his roast (he used to do the whole main course himself, with assistance from at least one male helper, but now of course it's all up to me).
So this year there's going to be a radical innovation - early dinner, starting about 4 pm, instead of late lunch. That'll give us time to have a properly leisurely morning, and I won't need to start cooking until after brunch. More of the old crowd will be able to come, after they've done their rounds elsewhere. And I think we'll go back to roast pork, Harvey will be really happy about that.
A Light Dessert of some kind used to follow, and maybe some cheese before or after. Then we gathered reverently (not) in front of the TV for the Queen's Message. We might skip the Light Dessert this year, but keep the cheese, it will go very well with the great red wine that usually appears.
The traditional Holly Walk has to happen at some point, to get a spray of holly for the Christmas pudding which follows the Queen's Message (I know better than to mess with this bit, Harvey loves his pudding). It used to be a drunken foray in the dark to the holly bush growing near the Northland tunnel. Now it's a reasonably sober early evening stroll up to the Karori Anglican church grounds and back round the block.
After that will come the flaming pudding, always made by me, complete with its holly and brandy sauce.  I make it at least a month in advance, mixing it and letting it stand overnight (this step is essential, as I discovered one year when, a bit pushed for time, I left it out - not good). The next day it steams for four hours.
The only problem is remembering that it has to steam for another two hours on Christmas Day. After all that wonderful food and drink and company, I'm likely to forget, and one year there was no pudding till 10 at night. Harvey was not amused. Then there was the year I got very slaphappy with the brandy for the brandy sauce - you could almost have lit that too.
I always use the same recipe. It originally appeared in the Edmonds Cook Book, but disappeared some time in the mid-1980s. I made it last weekend, but if you want to make it now there's still time. It used to be called "Christmas Pudding (Rich)" but in later editions (the one I use now is 1982) the "Rich" has gone. This recipe serves eight people. You need a traditional metal pudding basin with a lid and a large lidded saucepan to steam it in. The slightly odd measure of "125g" was originally 4 ounces.
Edmonds Rich Christmas Pudding
50g plain flour
125g plain white soft breadcrumbs
125g brown sugar
125g grated suet (the kind you buy in the supermarket - it only appears around Christmas now)
125g chopped apple
125g raisins
125g sultanas
125g currants (I put in some dried cranberries this year as part of this measure)
50g whole, unpeeled almonds 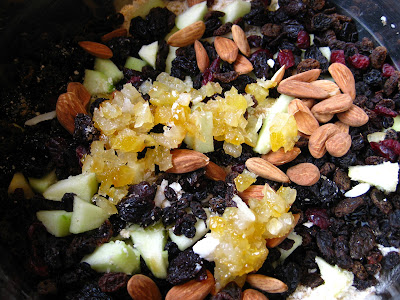 * Beat the eggs well and add them with the lemon juice. Stir well to mix. (Everyone in the house should have a stir at this point, for good luck in the New Year.) 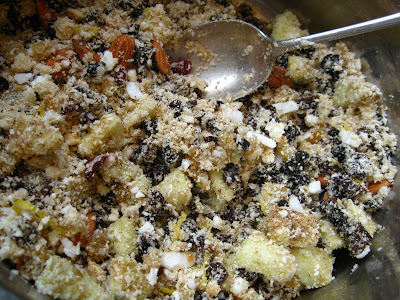 * Cover the bowl and leave to stand overnight.
* Next day, add brandy, put mixture into a lightly buttered pudding basin, and put on the lid. 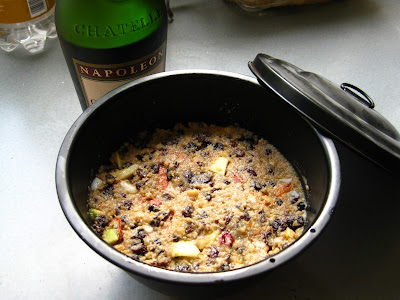 * Place enough water in a large saucepan to come halfway up the sides of the pudding basin (test it). Bring the water to a gentle coninuous boil.
* Stand the pudding basin in the water, cover everything with a lid, and steam for 4 hours, making sure the water stays at a gentle boil. You will need to add more boiling water about halfway through to keep the level roughly halfway up the basin.
* Turn off the heat and leave to stand for another hour. Then remove the basin and put it in the fridge until Christmas Day.
* Steam for 2 hours on Christmas Day. Turn out onto a large dish.
* Gently heat about 2 tbsps of brandy, pour over the pudding and light it so it's flaming as you bring it in to serve.
If you want brandy sauce, make a classic buttery white sauce, but with brown sugar, and add brandy to taste. Serve on the side.
I can't show you the pudding now, of course - it's sitting in its basin and won't appear in all its dark fruity glory until Christmas Day, when I will try to remember to take a photo.
Posted by AnneE at 10:15 PM

We'll be at my parents' home for Christmas this year, where the tradition is a long leisurely breakfast starting around 9am (about three hours after the children have gotten up), and a very light lunch - usually just sammies, using the excellent terrine Mum makes for breakfast - and family dinner around 6pm, which is earlyish, for the sake of the little ones.

I'm hoping that next year you will put a Public Service Advisory on your blog, telling us it's time to make our puddings, and linking to this post...