Harvey had a tooth out today, so he needed something nourishing, soft and warm (but not hot) to eat for dinner. In the pantry I had a kind of small fluted Italian brioche, called a Pandoro di Verona. I bought it at Caffe Italiano in Cuba Street when they had two for the price of one. So I came up with the idea of using it to make a bread and butter pudding. In the days when Harvey could fit in pudding as well as his main course, it was one of his favourites and he made it very well.

The recipe comes from another book I bought in London in the mid-70s, and used all the time: The Pauper's Cookbook, by Jocasta Innes. It appealed to me because we had two hungry boys, but so little money left over for food after paying rent, etc., and also because it was so down to earth. She wrote it, she said, because "it stood to reason that there must be a good few other people in my situation, trying to conjure good food from limited cash, battered old pots and pans and kitchens more nightmarish than dream." That was me, exactly. You can double this recipe if you have a hungry lot to feed and a wide dish to make it in.

Bread and Butter Pudding
6 thin slices buttered white bread (she recommends cutting the crusts off, but we like the crusty bits, at least on the top layer).
A handful of raisins or sultanas plus (if available) a spoonful of candied peel
2 eggs and 1 yolk
400 ml milk
1/2 tsp vanilla essence
sugar

Lightly butter an ovenproof ceramic or glass dish and set the oven to 160C. Cut the bread and butter into quarters or triangles, and arrange in layers in the dish, putting a sprinkling of the dried fruit and a sprinkling of sugar on each layer. Whisk together the eggs and egg yolk in a bowl. Heat the milk a little, add the vanilla essence, and mix it well with the eggs. Pour carefully over the bread and butter. Sprinkle sugar over the top, dot with tiny bits of butter and bake for 45 minutes to 1 hour.

"Like most simple dishes", says Jocasta, "bread and butter pudding needs to be made with care...but don't give in to the temptation to use packed sliced bread unless you want it to taste like wet flannel." This was certainly true of British sliced bread in the 1970s - ours isn't quite that bad. But it does work best with a good white unsliced loaf, and best of all with some kind of brioche or pannetone - only then, of course, it's no longer for paupers.

I'm sorry, you're only getting half a picture because I was intent on feeding it to Harvey and scooped out half of it before I remembered to take a photo. Which is sad, because with the neat round fluted slices, it was the prettiest one I've ever made.
Posted by AnneE at 9:25 PM 1 comment: 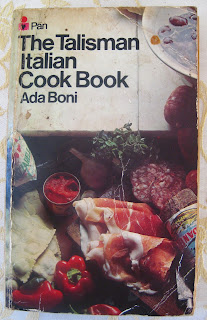 This is my battered 35-year-old copy of Ada Boni's classic Italian cookbook, The Talisman. It was first published in 1928, and was a huge success. By the time it had reached its fifteenth edition, it ran to 866 pages and had 2000 recipes, but half of them weren't of Italian origin. When Matilde La Rosa did the English translation in 1950, she kept only the genuine Italian recipes. In 1975 it came out in paperback. I was living in London and bought it there. It was my first introduction to real Italian cooking - until then I'd only produced the vaguest of imitations, like scone-dough pizza and spaghetti bolognese made with a packet of oxtail soup.

Tonight my niece Jenny and her friend Mark were arriving back from a tramp up Mt Holdsworth, so I knew they'd be wanting solid comfort food. At lunchtime I put the slow cooker on and made an old favourite, Stufatino Alla Romana - Roman beef stew. I hadn't made it in the slow cooker before, but it worked very well indeed. We had it with mashed potato and a parsnip and carrot mash. Although I put in 700 grams of gravy beef, there wasn't much stew left over. 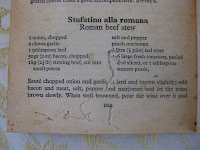 The original page with this recipe is well-stained and eaten through with little bookworm trails. (The creatures that ate it aren't really called bookworms, but I don't know their correct name.) Here's my version, slightly adapted over the years:

1 onion, chopped into small but not tiny pieces
2-4 cloves of garlic, chopped
1 tablespoon olive oil
50 grams bacon, chopped into small pieces (the best kind is that solid lump of bacon you can buy from some specialty suppliers such as Moore Wilson in Wellington, but ordinary leanish bacon is fine)
700 grams cross-cut blade or gravy beef, cut into smallish cubes
salt and pepper
1 tablespoon (approx.) chopped fresh oregano
250 ml (a third of a bottle) robust red wine (not pinot noir)
1 tablespoon tomato paste (the translation says puree, but I'm sure that's wrong, it's too feeble)

If you plan to cook this either on the hob or in the oven, use a shallow casserole with a lid that you can put directly on the heat. If you want to use the slow cooker, use a frypan and transfer everything to the cooker for the long cooking part.
If using the oven, set it to 180C. If using the slow cooker, set it to high.
Saute the onion and garlic gently in the oil until slightly brown. Add bacon, fry briefly. Add meat, salt, pepper, oregano, and let meat brown gently. Pour wine over and cook until liquid is reduced by half. Add tomato paste and only just enough hot water to cover meat. (If you're using the slow cooker, put everything in it at this point and add more water only if it really looks too dry - you won't need much.)
Cover and cook for at least 2 hours, either on a very low heat on the hob (you will need a simmer mat for gas) or in the oven. Check halfway through to see if it's getting too thick and sticky, and add a little water if necessary. In the slow cooker it takes about 5 hours on high.
"The sauce should be dark and very savoury" says Ada. She recommends serving it with braised celery, but I prefer smoothly mashed potato and whatever other vegetable you fancy. 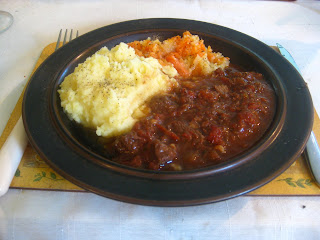 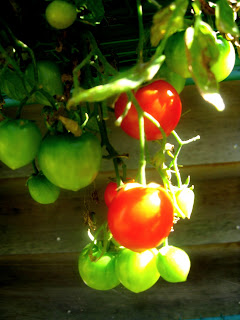 The Wellington suburb of Northland isn't renowned for its tomatoes. When Harvey was still gardening, he would hopefully plant some every year, and in April I would start making green tomato chutney.

Now we've moved to Karori, I'm responsible for the vege garden. Thanks to my neighbour, I've finally discovered how to grow tomatoes here successfully:

1. In December, drive out to Oderings in Upper Hutt.
2. Buy a ready-planted basket and a bottle of tomato food.
3. Water well and follow the feeding instructions on the bottle.
4. Pick a handful of little red tomatoes every day.

The basket is meant to produce yellow ones too, which I like for their sharpness, but I've had less luck with those - the red kind seem to have taken them over.

We eat these for lunch with bits of basil, but they also make a good appetizer: cut out the stem end using a V cut, and push seasoned cream cheese into the gap. You can also roast them, but it seems a bit of a waste, and by the time they've shrunk with the heat they're very tiny indeed.

Hardly a major contribution to our food, I know, and unlike my Tauranga friends I don't get huge bowls of them. Still, it feels immensely satisfying to twist them off their stems and bring them inside. And they taste terrific.