A cape gooseberry by any other name... 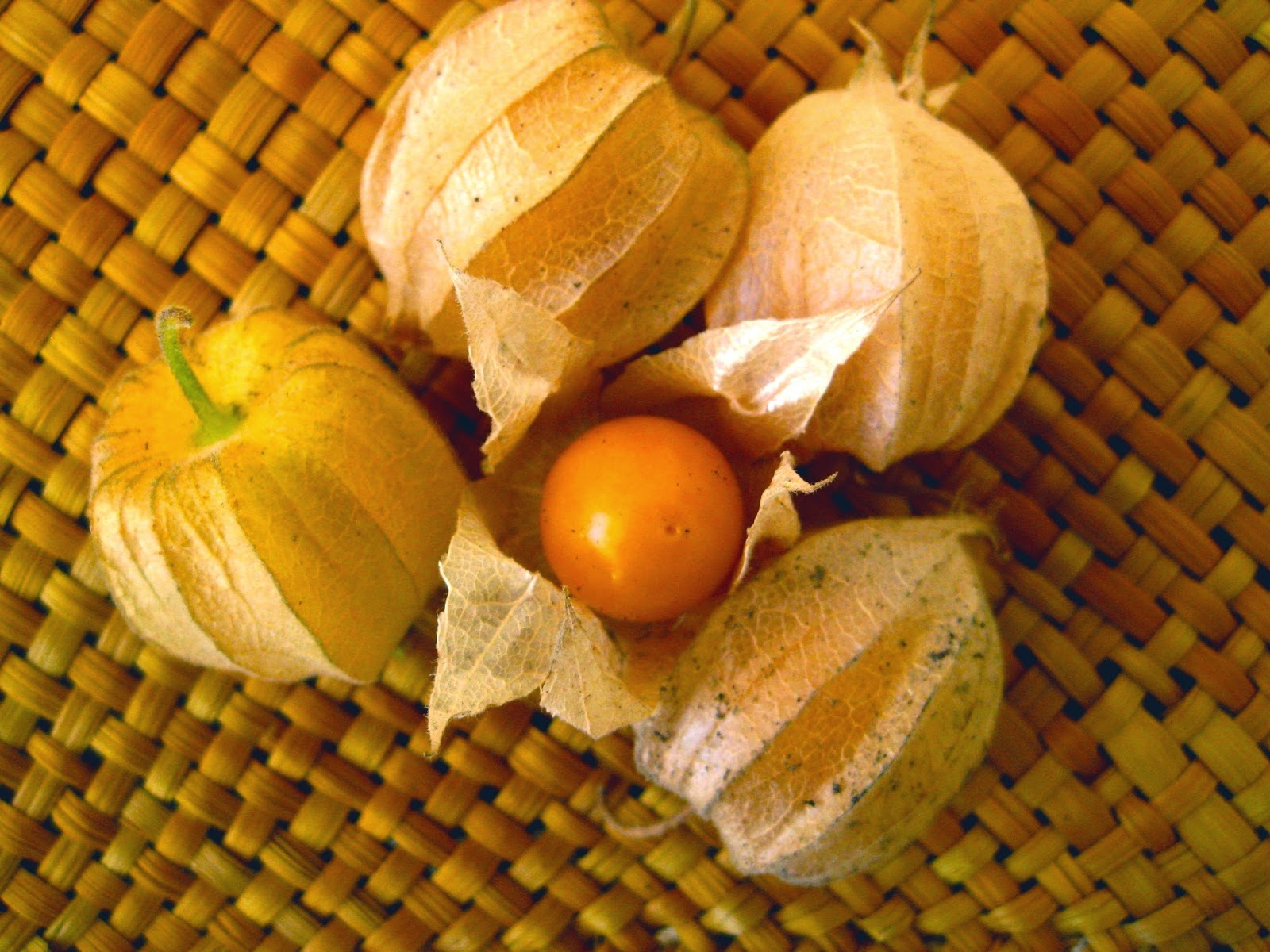 Last week was Local food Week in Wellington, and I had a great time as one of four bloggers/authors speaking at The Library Bar (I say it's my favourite bar, and it is - but it's really the only bar I happily go to on my own). The others were such a pleasure to see and hear: Sue Kerr (Five Course Garden), Laura Vincent (Hungry and Frozen) and Jared Gulian (Moon over Martinborough).
I told some local food stories of my own, including my pride in one of my very few genuine food-growing successes. As I've confessed before, unlike Harvey I'm just not a Real Gardener - everything in the garden seems to make me itch. But thanks to Ali, who gave me a plant, I have managed to produce quite a decent crop of cape gooseberries - or as we are being told to call them now, pichuberries. Here's the next lot coming on - they aren't ready to pick until they turn a very dry pale beige on the outside, and preferably fall off (only then you can lose them on the ground). 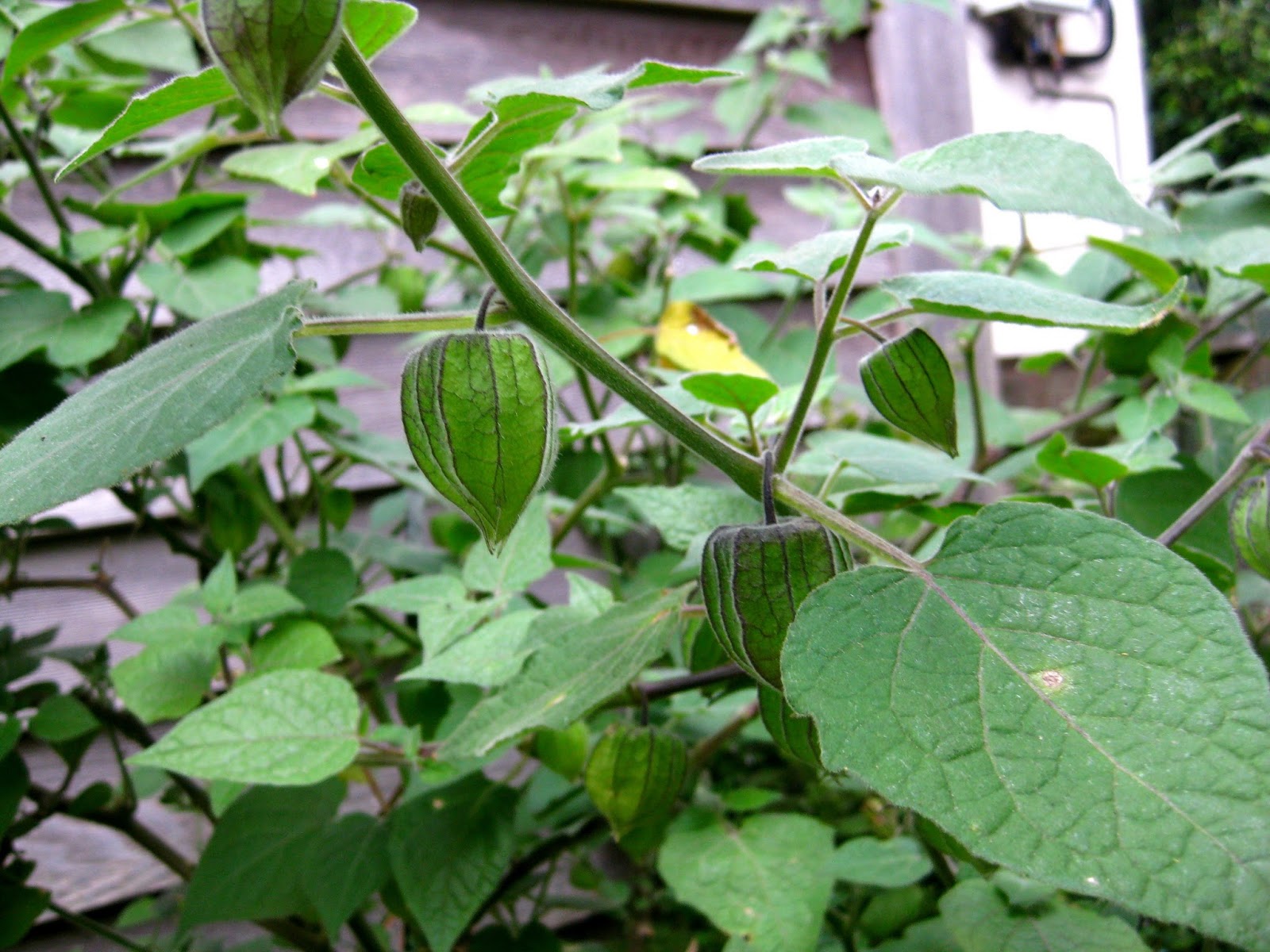 Renaming fruits and vegetables to win a bigger market for them is nothing new.  Tree tomatoes became tamarillos, Chinese gooseberries became kiwifruit. Ever since we've prided ourselves on the world instantly associating kiwifruit with New Zealand, but...maybe not. Here's what I found on a US foodie blog tonight:

In the 1960s, the Chinese gooseberry became the kiwifruit. The new name was taken on—after decades of trial and error—when it was discovered that Americans then associated the fruit with Australia, an exotic (but non-threatening) land, instead of China.

Yes, well. The latest fruit to be rebranded is the humble cape gooseberry (Physalis peruviana, closely related to the tomatillo and more distantly to tomatoes, potatoes and eggplants). I wrote about it in my book, remembering it from staying at my grandmother's in what was then the sleepy little country settlement of Greenhithe, on Auckland's North Shore:


At night we made charred smoky toast on a  toasting fork over the fire and spread it with the jam that Mum cooked up from teh golden cape gooseberries I collected on the vacant section next door, where they ran wild over the warm slab of concrete that had once supported a house.

I thought they got their name from the pretty fluted lantern-shaped cape that covered them, turning into a fine transparent lattice as it dried. In fact they're world travellers. The British carried them home from Peru, where they were known as aguaymanto or Inca berries, and took them on to the Cape of Good Hope in South Africa; then they made their way down to Australia and New Zealand, where they acquired their new name.
Now they've been transformed into pichuberries (after Macchu Picchu) thanks to a new company, Mojo Tree Farm. It was created in 2010 by a University of Arizona student, Michael Popescu,  as part of his master's thesis in entrepreneurship. The company's dietician,  Manuel Villacorta, has been effectively promoting them as the new superfruit (though sceptical people point out that other fruits such as blueberries have similar characteristics).  He claims they're "useful in fortifying the liver, supporting cardiovascular activity, strengthening lungs, and enhancing fertility and food absorption". Perhaps. In any case they look pretty, taste great, and will definitely be generally good for you, so what's not to like?
Last week I collected a decent bowlful of them. But when I went looking for recipes there was very little under "pichuberry", whereas "cape gooseberry" came up with some interesting ideas. I liked this one best, though I haven't tried it yet -and the association with chocolate, from their homelands, is attractive: 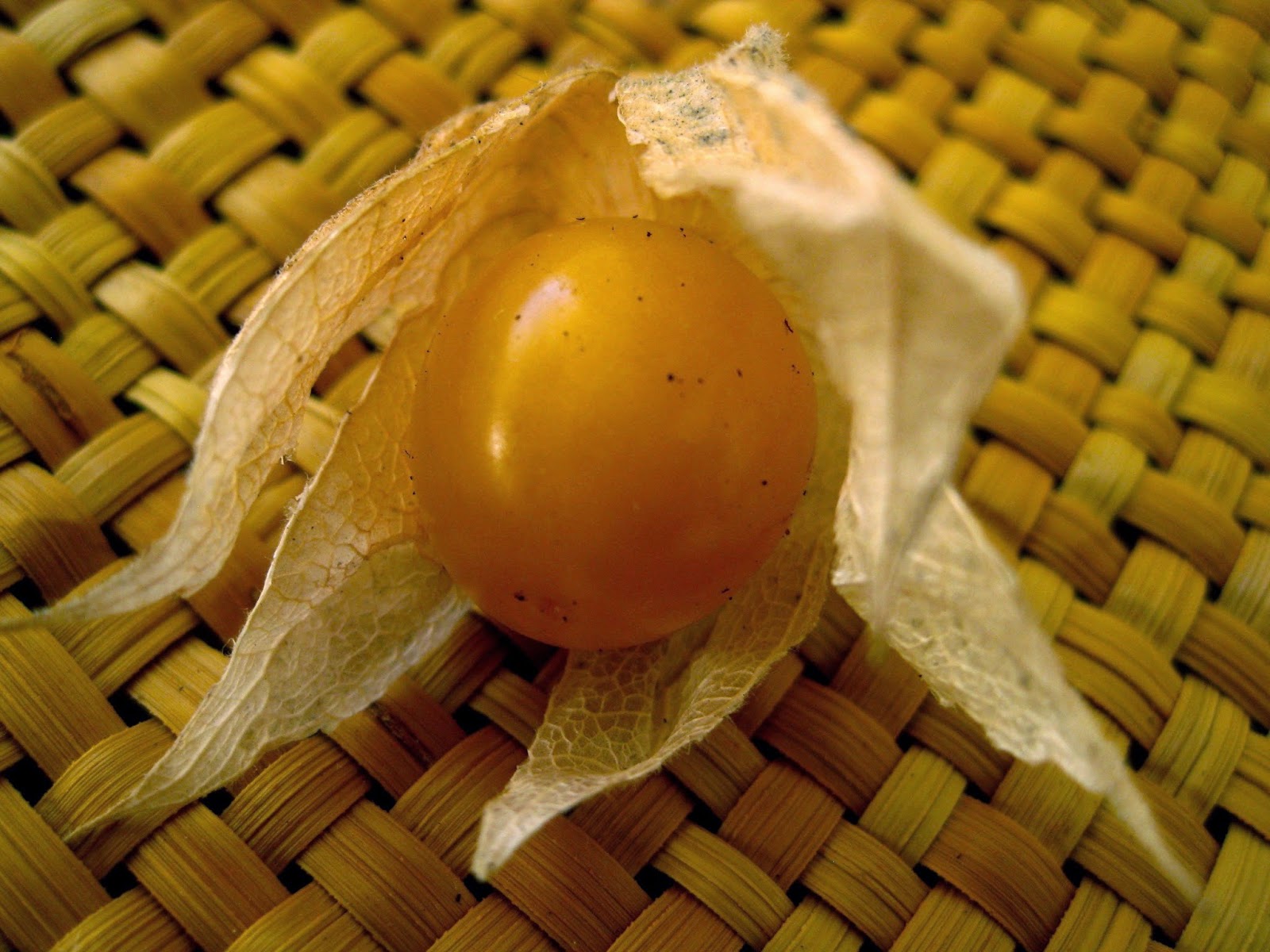 Cape gooseberries still in their lanterns
Melted dark chocolate
Peel back the lanterns, folding them away from the berry into a star shape.
Carefully dip the golden berry into melted chocolate.
Place on grease proof paper to set.
Use beside sweet desserts or cheese board.

But I'll mostly just go on poaching them gently in a small amount of sugar syrup with some honey added, and eating them with icecream or good yoghurt, or on top of a slice of cake - they're very good with the hummingbird cake in my previous post. 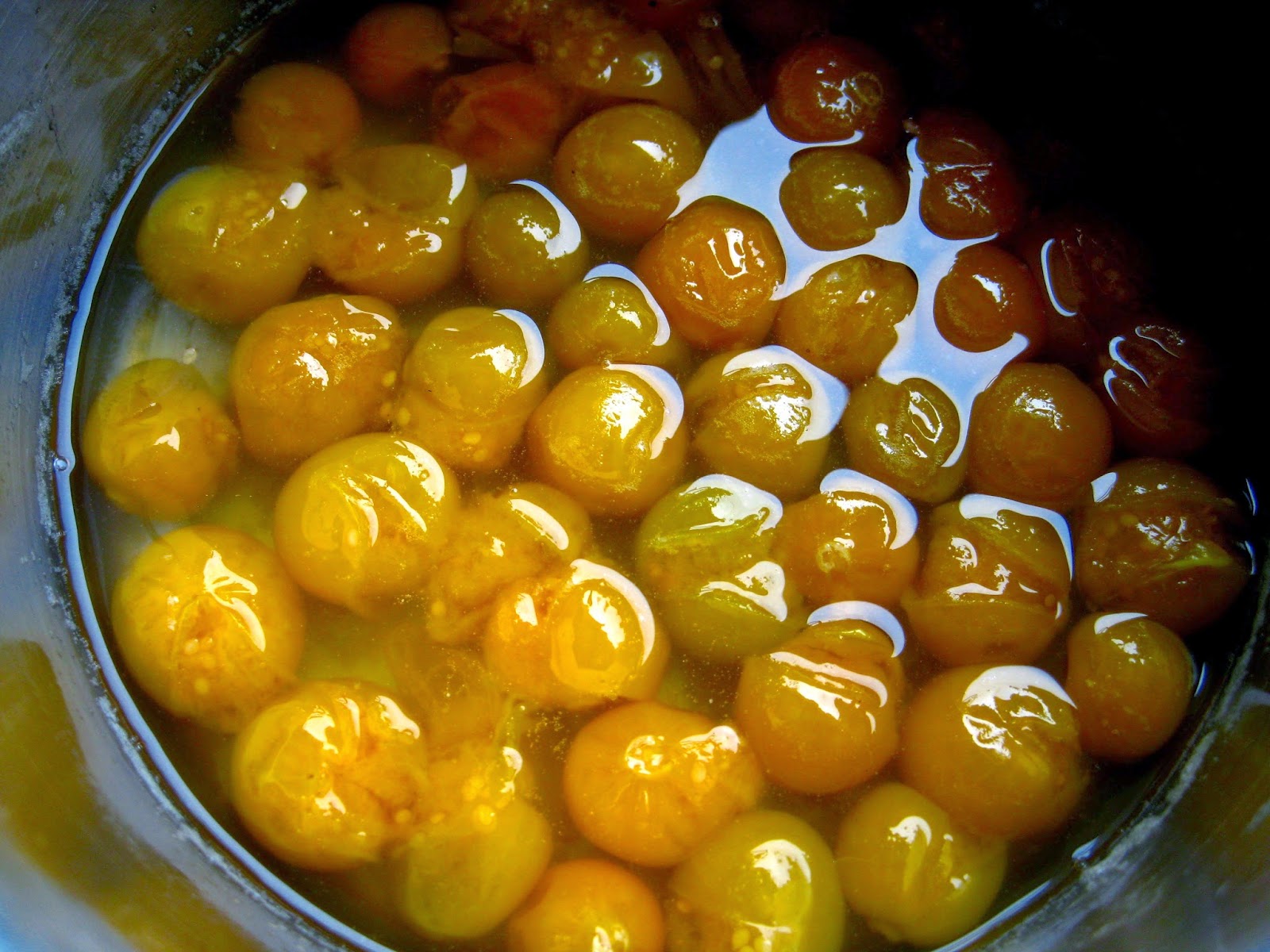 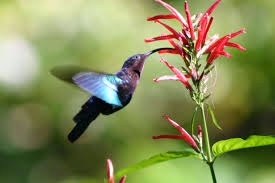 I had heard of hummingbird cake, but until last week I'd never eaten it or made it. This cake is now associated with southern states in the USA, but it's a relatively recent import there, and it's known in other places by many different names: Cake That Won't Last, Jamaican Cake, Granny's Best Cake, Nothing Left Cake, Never Ending Cake.
Nobody seems to know exactly where the name comes from, but there are lots of suggestions:
- It's as sweet as the nectar that  hummingbirds drink from flowers - or sweet enough to attract humming birds...
- When the cake is served, people hover around it the way hummingbirds hover around flowers - maybe humming with delight...

- Bananas and pineapples come from the tropics, and the national bird of Jamaica is a hummingbird...
None of these sound very convincing - does anyone have a better idea? There definitely seems to be a Jamaican connection. The Jamaican hummingbird is called the Doctor-Bird, and a recipe for Doctor-Bird Cake, including bananas but not pineapple,  appeared in the Jamaican Daily Gleaner in 1969.
Southern Living Magazine published Mrs. L.H. Wiggin's Hummingbird Cake recipe in February 1978 (but she didn't explain the name). That year it won the Favorite Cake Award at the 1978 Kentucky State Fair. Hummingbird Cake quickly became the magazine's most requested recipe and was voted its favourite recipe ever in 1990.
The Southern US version has mashed banana, crushed pineapple and pecans, with layers and cream cheese icing. The simpler New Zealand version I used has no pecans, but it does have passionfruit. I found it (thanks to my neighbour) in the March issue of Cuisine. It comes from Alice Arndell's much-praised book, Alice in Bakingland, but she got it from The Village Cafe in Martinborough. It's extremely easy, and that's the only kind of cake I make, pretty much - mix it, bake it. And it's a beautifully moist dessert cake.
Hummingbird cake (Slightly adapted from recipe by The Village Cafe via Alice Arndell, reprinted in Cuisine, March 2014)
375g mashed banana (about 3 large bananas)

Set the oven to 180C (if you have a fan, don't use it, just use "bake").
Grease and line the base of a 23cm round loose-bottomed cake tin or 2 smaller tins.
(You could make two layers and stick them together with icing, as they do in the USA, but this does seem like overkill.)
Put the three fruits into a large bowl and mix to combine.
Add the sugar, oil, eggs and vanilla and mix to combine.
Add the dry ingredients and mix until evenly combined.
Pour into prepared tin and bake for 60 to 75 minutes until a thin skewer inserted in the middle comes out with just a few crumbs on it. (Two smaller cakes will bake more quickly.) Put tin or tins on a wire rack and leave cake/s to cool completely before removing. Cream cheese icing
80 g cream cheese, softened
45 g butter, softened
3 and 1/4 c icing sugar
1 tsp vanilla
1 Tbsp lemon juice
Passionfruit pulp to decorate
Beat cream cheese and butter together. Add icing sugar, vanilla and lemon juice and beat till smooth. Spread over top of cake and decorate with passionfruit pulp.
(If you want to cover the whole cake, make half as much icing again - this looks very pretty but again, it could be overdoing it!)

I forgot I shouldn't use the fan and had the oven a little too hot as a result, so the cake cooked quickly, cracked a bit on top and got a slightly crunchy outside. (I made a smaller loaf cake as well.) But this actually didn't matter at all, it was a nice contrast - when we cut into the cake it was really moist and tender, perfect for dessert.  I didn't use the icing - instead I mixed together a sachet of mascarpone, some icing sugar (taste as you go - it shouldn't be too sweet), the juice of half a lemon, and pulp from another passionfruit, to serve on the side. This went perfectly with the sweet cake. We were happy as hummingbirds. 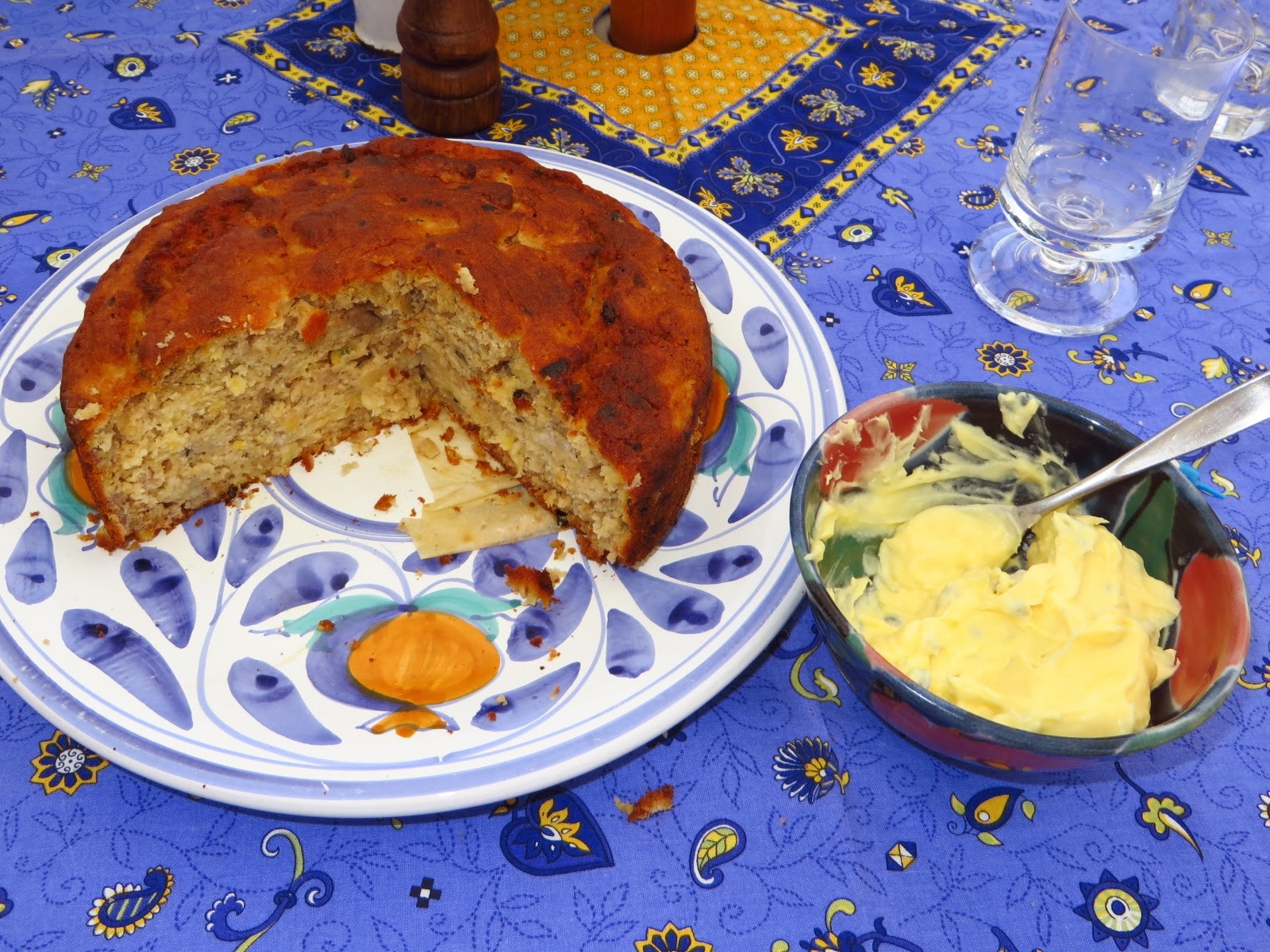