I don't usually buy cornflakes, but a while ago I needed some to eat for medical purposes (don't ask). They come in an enormous box, so I had lots left over. So naturally,  my mind turned to Afghans, or as they're now known, Afghan biscuits - although I don't think there was ever anything genuinely Afghan about them...
Edmonds does, of course, have a recipe, but when I had a look at my online stash, I found a more interesting one by Mrs Cake. I followed the biscuit part exactly, except that when I went to soften the butter in a warm oven, ready for creaming (which I lazily do in the food processor), I left it too long and it melted. I wasn't going to waste all that butter, so I went ahead anyway. The good news is that it didn't seem to make any difference at all - the texture was perfect.
The icing had to be adapted a bit because I didn't have enough icing sugar, I don't like ti too sweet, and (IMHO) it has to contain real chocolate. So I cut the quantities back by two-thirds, and added about six little blocks of Whittaker's Dark Ghana, plus a dash of vanilla. That provided more than enough icing for the 15 smallish biscuits I made.

- Preheat oven to 180 C. Line a baking sheet with baking paper.
- Cream the butter and sugar until light and fluffy. (Processing it works fine.)
- Mix in the vanilla, then sift in dry ingredients and mix together. (You can process it all again gently until mixed.)
- Use your hands to crumble the cornflakes into the mixture so they are in smaller pieces, then mix in with your hands.
- Form into balls, place on baking sheet and flatten (either with the palm of your hand or with a fork). - Bake for 12-14 minutes. (Mine took 15 minutes, on fan bake at 170C.)\ Put on a rack, on their paper, to cool.

- While the biscuits are cooking, mix together the water, extra butter and caster sugar in a small saucepan.
- Heat until butter is melted, then simmer for a minute to form a syrup. Add vanilla.
- Melt chocolate into the syrup over a low temperature, mixing well.
- Add the icing sugar and cocoa, and whisk or stir very thoroughly to combine. 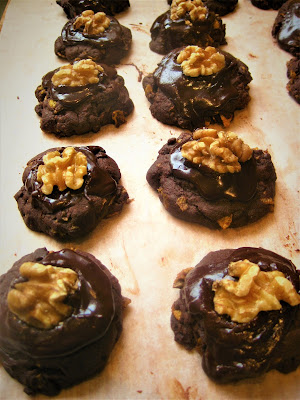 When the biscuits have cooled, crown each one with a dollop of icing (it should sort of pool on top - if you need to warm it slightly, either heat it again very gently in its saucepan, or give it 10 seconds in the microwave).

Press a walnut half or 2-3 coffee beans into each one.  I think these go extremely well with a cup of spicy Chai tea.
Posted by AnneE at 3:46 PM 3 comments:

After the earthquake: Tranquil lettuce soup

After the earthquake, we needed something calming to eat, and my thoughts turned to lettuce. It has a venerable reputation, going back at least as far as the Romans, for promoting sleep, because the milky sap which provides its distinctive taste contains a minute quantity of something known as "lettuce opium". But the concentration is only 2 to 10 parts of morphine per million, compared with the usual therapeutic morphine dose of  0.5 to 50 parts per thousand - roughly a million times as much. So some hopeful hippies' attempts to get high on lettuce products were doomed to fail.

The French continue to regard lettuce as calming, especially when it's cooked. Elizabeth David has the perfect recipe for trying this out: Potage du Père Tranquille, Soup of the Tranquil Father. She explains that he "seems to have been a somewhat mysterious Capuchin monk, but the name ... is also a reference to the supposedly soporific effects of lettuce."

It also feels very economical, because it can be made with the outside leaves of lettuce that are usually thrown away. In The Colour of Food, I tell a story about this:


Every so often Harvey would embarrass me by well-meant but misplaced praise – like the time he announced proudly to a well-to-do guest who had arrived at short notice, ‘Anne made this soup from the outside leaves of lettuce!’ Even though Potage du Père Tranquille was a good French recipe, I cringed at having my economy exposed.

I doubt that the French ever use iceberg lettuce, but it works perfectly well for this soup, and one large lettuce provides enough outer leaves for the recipe.

Outer leaves of one large iceberg lettuce or 2 to 3 buttercrunch ones (David says 3)
(If you have lots of lettuce to spare, use a whole one)
500 ml mild chicken stock (I use half chicken and half miso stock)
300 ml milk
salt and pepper
about 1/8 tsp grated nutmeg
1 tsp sugar
small lump of butter or 50 ml cream

- Wash leaves carefully, shake off water, pile them together and slice them across into long fine ribbons. 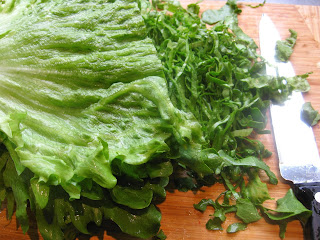 - Put the sliced lettuce in a large sauce[an with just enough stock to cover them. Simmer gently, adding a little more stock or water if necessary, until they are quite soft. 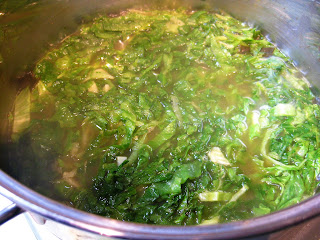 - Drain the cooked lettuce through a sieve into a bowl. Keep the bowl of stock.
- When the lettuce has cooled, puree it in a blender or food processor.
- Return the puree to the pan. Stir in the stock and enough milk to make a thin cream (check the flavour after adding some milk, as you do not want to make the soup too bland and tasteless).
- If you don't want any little bits of lettuce in it, sieve the soup at this point. (I rather like the texture and colour of the tiny green bits.) 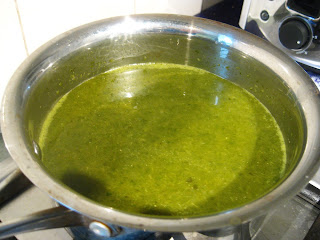 When you're ready to serve the soup:
- Add sugar, a good grind of black pepper (or if you do not want to see black specks, white pepper) and a small grating of nutmeg. Taste for seasoning and add salt only if necessary.
- Gently reheat soup and just before serving, stir in either a small lump of butter or a little fresh cream. French bread is good with this, but so are garlic bread or Vogel's Extra Thin.
I don't know if it did indeed make us more tranquil, but it certainly felt soothing and warm on the stormy day after the earthquake.