Camille is my Auckland friend of longest standing - we were at school together, and she features in the French chapter of my memoir. She's a sister gourmande, and she also has very knowledgable foodie friends.  So I asked her to find the restaurant for my belated birthday lunch on Friday with her and Rosemary (the finest private cook I know). United Kitchen in Anglesea St, Ponsonby, came warmly recommended, and when she phoned to book she struck gold. They just happened to be holding a special five-course lunch that day with Central Otago winemaker Akarua. Irresistible!

We began with a glass of pale, elegant brut, followed by another (well, we did get there early and I did tell them it was my birthday - only Rosemary, as the driver, was admirably restrained). It went very well with the sweet potato tortellini with truffle mascarpone, crisp sage and beurre noisette. (Please forgive me, dear Akarua, for not photographing the wine as well as the food - you can see everything we drank here.) 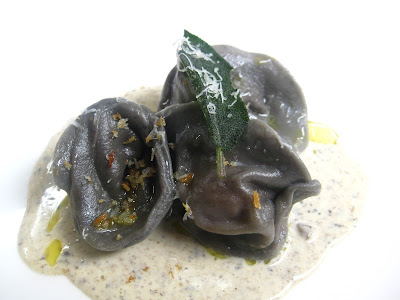 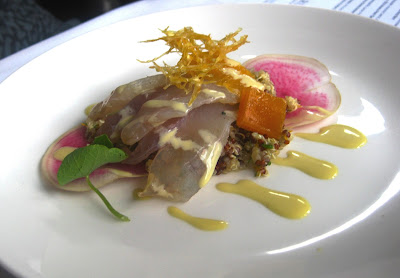 Next came pork cheek and scallops (brilliant), heirloom carrots and apple salad, with the 2014 pinot gris. 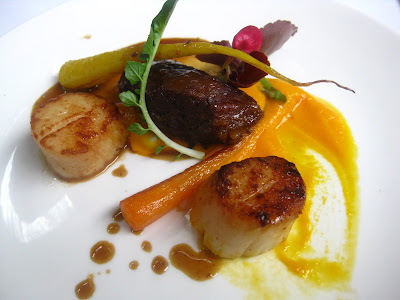 And a perfect little beef cheek and mushroom pie, looking like a miniature pithivier, and smoked potato puree (I must find out how they did that), with the 2013 Bannockburn pinot noir. 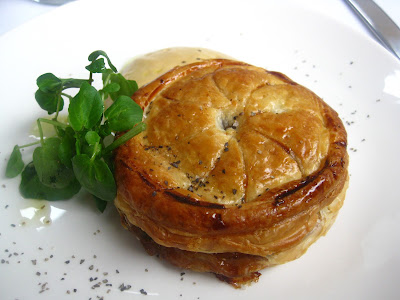 Finally - sorry, I didn't get a good photo, you'll just have to imagine it - a pear and rhubarb crumble and pistachio icecream, with Alchemy ice wine.
Everything was beautifully served by a handsome young man from Marseille (who even complimented me kindly on my French). Couldn't get much better, I thought - but it did. There was a draw for a magnum of Akarua Brut, and I won. There it is on the windowsill. No wonder we look so relaxed and contented. 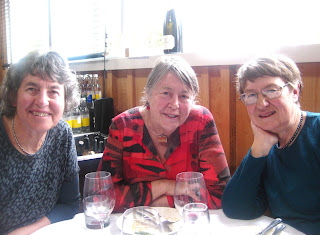 In praise of lamb - and Julia

One advantage of having my son staying with me at the moment is the good excuse it gives me to have a roast, especially a leg of lamb. They were on special this week and I was having my neighbour round for her regular dinner. She's a real carnivore, and she suffers from that living-alone problem of not having proper roasts, so I knew she'd love it - and so would my son.
Even on special they still seemed expensive. But when the long knobbly bone finally went into the trash on Tuesday, picked very clean indeed, I worked out exactly how many meals we'd had off that leg (which weighed 2.48 kg).
Roast dinner for three, cold meat for two twice, rissoles for two twice, and a few lamb sammies for lunch as well. I'm particularly fond of slices of pink roast lamb made into sandwiches with nice soft white bread and a good sprinkling of salt and pepper.
So the initial layout of $27 covered, let's say, 10 servings of dinner (allowing for the fact that I added a soup and some fritters to eke out the meat here and there) - that's $2.70 per person for meat. Not bad, eh.
And very delicious it was too. The blog has the recipe I usually use for the roast itself and for those rissoles. But this time I decided to use Julia Child's basic recipe for roast leg of lamb, because I was short of time earlier in the day and didn't want to be bothered with the mustard coating in advance. 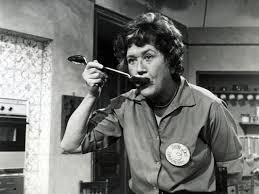 It was an interesting exercise. I was intrigued to see that she adds salt and pepper only at the end. This seemed odd, so I did sprinkle a bit over the top of mine just before putting it in the oven. I shoved a few slivers of garlic around the bone too. But of course Julia was originally using the famous French "pré-salé" lamb, which I used to think meant "presalted", but actually means "salt-meadow", the seaside meadows where the lambs graze, absorbing the taste of salt with their grass and herbs. Harvey and I had it once for lunch in Rouen, and it was superb.
Her recipe is for a 6 pound leg, roughly 2.75 kg, but as I've often found it takes longer in the oven for a roast than she says, even though it's on fan-forced, I thought it would be safe to use the lower times she gives for my 2.48 kg leg (starting at room temperature).  But since you do initially sear it at 230C for 15 minutes, unlike the mustard-coating recipe, that obviously makes it cook quicker for the rest of the time at 180C. An hour was plenty - in fact I would have been happy to have it a little pinker (although I think my neighbour probably preferred the way it turned out, well towards medium rather than rare, though still nice and pink in its deeper recesses). I've left her timings in their original form for the larger leg, but if you're using it for a smaller one, check with a meat thermometer after it's been in the 180C oven for 45 minutes, rather than leaving it for an hour.

This is for a leg weighing 6 pounds, approximately 2.7 - 2.8 kg bone in.
Remove the lamb from the fridge an hour before cooking. Trim off as much fat and silverskin as possible, and wipe it dry with paper towels.

Preheat the oven to 230C. Melt 2 tablespoons of butter with 2 tablespoons of oil in a glass jug in the microwave, Brush the lamb all over with this mixture.
Place it on a rack in a roasting tin just large enough to fit it. Place the tin in the upper third of the preheated oven. For fan-forced, turn the heat down to 220C. After 5 minutes, turn it over and baste it again with the leftover butter and oil.
Repeat after another 5 minutes, and again after another 5 minutes. Leave the roast after the final turn with its fatty top side uppermost.
Take out the lamb and turn the heat down to 180C. Strew the roughly chopped pieces of 1 large carrot and 1 large onion and a few cloves of peeled garlic in the bottom of the pan. Set lamb in middle of oven and roast till done, with teh correct temperature showing on the meat thermometer. Basting is not necessary.

Season the lamb with 1 tsp salt and 1/4 ts pepper, and place it on a hot platter. Leave it to rest at room temperature for 30 minutes before carving slices across the grain. (You can wrap it loosely in foil and leave it for longer.)

To make the sauce: Remove the rack from the tin, and spoon out the cooking fat. Pour in a cup of stock (I use miso) and boil rapidly, scraping up the juices and scraps and mashing the vegetables into the stock. Taste for seasoning. Just before serving, strain into a hot sauceboat, pressing the juices out of the vegetables. Add any juices which may have escaped from the resting roast.
(Or simply discard the veges, add red wine to the pan and boil that with the scraped up juices and scraps and a dash of  soy sauce, taste, then strain.)

Be sure to serve the lamb on hot plates to stop the fat congealing.

I found this entertaining gem online: Julia Child visits 16 master chefs in their own kitchens.
Posted by AnneE at 9:52 PM No comments: