Variations on a fishy theme

A while ago I posted a recipe for Mediterranean fish bake (best to have a look at that before you go on reading this).  I said then that the recipe was only approximate, and that the key ingredients were the fish, potatoes, peppers and olives.
I proved to myself this week that it was indeed very flexible, and that the olives can be changed for other things. The local New World, whose fish counter has recently taken a leap forward, had very nice-looking trevally, the same fish as I used last time, for only $16 a kg. I already had some Agria potatoes (which have been turning up loose at very good prices recently) and I also had some similarly cheap kumara (yellow - I don't like the orange ones, they remind me too much of pumpkin, which I can eat only in the form of soup or pumpkin pie). I had a tin of artichokes, too, and one of sweetcorn kernels, as well as some nice little orange peppers and the usual onions and garlic.
So I set about creating the bake again, only with variations. This time I didn't even bother to slice the potatoes thinly. Instead I cut them, and a couple of kumara, into smallish chunks, about 2 cm square, sort of. Then I put them into a wide, shallow baking tin, mixed them with the oil, miso stock and white wine (see original recipe) and cooked them for 30 minutes at 200C. The original recipe says 200C turned down to 180C, but this time I wasn't going to cook them as long overall, because I'd managed to eliminate a couple of steps.
While the potatoes and kumara were cooking, I microwaved the onion and sliced pepper (using the "fresh veges" button) and set them aside, then cut the thick trevally into chunks, sliced up a few artichokes and drained the corn kernels. For extra greens, I cut up some broccoli and got that ready to microwave separately.
Once the potatoes and kumara were almost done, I strewed (I like that word, it has a fine Elizabethan ring to it) the cooked peppers and onions and corn, which I'd mixed into them, over the top, then added the artichokes and fish and a little more seasoning. The colours looked really good together - trevally is a lovely deep rose-pink. 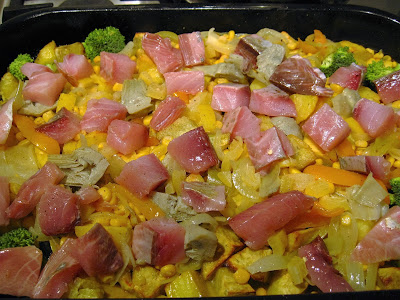 Then I put it all back in the oven for about 10 minutes. That was enough to heat all the veges through and cook the fish. So it took rather less time and fewer steps than the original recipe. I deliberately made enough to do two nights - while I really do like cooking, it's still very nice to have a tasty one-dish meal that needs only gentle heating, and in this case microwaving a bit more broccoli. 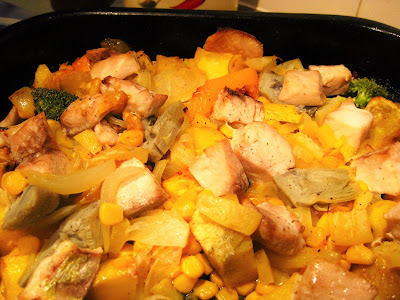 As Rosemary, who gave me this recipe, says, it's really more of a method than a recipe. I'm sure I'll be able to come up with equally delicious new variations in future.
By the way, there was a little bit left over from the second night. I had it fried up for breakfast, with a poached egg on top - potato, fish and egg, always a brilliant breakfast combo.
Posted by AnneE at 8:00 PM 1 comment:

Several things have combined lately to give me a push towards vegetables. I have no intention of becoming vegetarian - I really like well-cooked meat.
Although I've always been a townie, I was brought up on the great Kiwi tradition that no matter what form it took, animal protein was the star of the evening meal, and quite often of breakfast and lunch as well.  Harvey grew up on a sheep farm where they often did have meat for breakfast, dinner (meaning lunch) and tea (both in his home and mine, it was never called dinner). He used to tell the story of a visiting correspondence school teacher who announced that she was a vegetarian, completely disconcerting and baffling his mother, who had no idea what to give her for lunch.
The wonderful Gallery of Regrettable Food captures the iconic status of meat in the 1950s perfectly in the caption to this remarkably unappetising photo, from the Better Homes and Gardens Meat Cookbook. 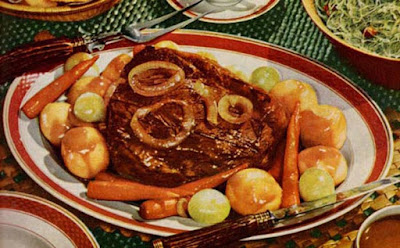 When decorating your meal, make sure to arrange the onions in the shape of Peter Lorre's face. It's steak a la Ugarte! Garnish with small, inedible onions.

WARNING! The carrots here are not to be eaten. Your manly meat-a-rifficness will diminish if you eat the carrots. Vegetables are for commies.

For years I haven't eaten nearly as much meat as my parents did. But lately I seem to keep reading and hearing perfectly sensible, non-vegetarian people urging me to eat less of it, for a whole host of good reasons. Various kinds of damage are done by large-scale meat production, especially based on grain, and these will get exponentially worse as the newly prosperous want to eat  more of it. While eating red meat is the easiest (and tastiest) way to get iron and essential B vitamins, we don't need to eat much of it to get enough. Then there's the constantly repeated injunction to eat more vegetables, for our health's sake. Michael Pollen nailed it: "Eat food. Not too much. Mainly Plants."
And of course there's the cost of buying it.  If we routinely ate less meat, it should be possible to ensure that it's sustainably and humanely and yes, affordably produced - and we would appreciate it more.
For some months now I've had my son living here. The years he spent in China have inclined him to enjoy veges much more than he used to. Both of us have to be a bit more careful not to over-eat, because we just don't need large amounts of food now.  A few years ago, suddenly noticing the inevitable results of a good deal of comfort eating (and drinking) after Harvey died, I managed to lose a considerable amount of weight (which hasn't come back). It dawned on me then that for the most part (and provided they aren't slathered in butter and/or sugar), fruits and veges are generally low-calorie - so you can eat a lot of them without fretting.
Anyway, all of this has made me think about how to shift the way I think about dinner, veering away from the meat and towards the veges, so they become, at the very least, the co-stars. But it's not easy to make this change. There's the problem, too, of keeping a good range of veges on hand for your clever creations without half of them going off.
I'd love to hear from other people who've tackled this problem and successfully managed to cut down their meat consumption without giving it up altogether, while still producing delicious dinners that bear no resemblance whatsoever to the surreal horror of the vegetables featuring on the Gallery of Regrettable Food. Here's the fearsome Jello Creation. 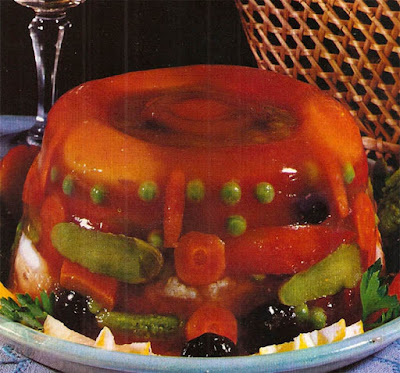