Mastering the mysteries of potato salad

For our Christmas Day buffet, I made potato salad. It was a great success, and I was looking forward to eating the leftovers on Boxing Day - but it was so cold and wet I didn't feel like it, and bought a supermarket pouch of soup instead (because I can't be bothered making any). Still, I learnt a lot of interesting things in pursuit of potato salad mastery, so I thought I'd share the essentials with you, plus a recipe,  because today the sun is out and it feels like salad weather again.

1. Good potato salad requires potatoes that are neither under-cooked nor over-cooked. Starting the potatoes in boiling water is a bad idea, because the outside overcooks before the inside is even warm. So always start the potatoes in cold water.
2. Adding 1 tablespoon of rice or white vinegar per litre of cooking water, as well as salt, both seasons the potatoes and helps to prevent over-cooking.
3. Because potato salad is eaten cold, it needs more seasoning than potatoes served hot. Adding more some seasoning to the hot drained potatoes is much more effective than waiting until they're cold.
4. Mayonnaise needs to be added later when the potatoes are cold, and you can add a bit more vinegar at this stage too, along with pepper.

If you really want to know every detail of the science behind all this, complete with the cellular construction of potatoes and pictures using green dye to show how seasoning gets in, go here.
The Food Lab guy's final word:

Two tablespoons of vinegar in the cooking water, another to dress the hot potatoes, and a final two in the mayonnaise mixture add plenty of layered brightness. Mayonnaise—be it storebought or homemade—is a must... By stirring the salad vigorously, you can bash off the corners of the potatoes, which get mashed up and extend the amount of creamy dressing to tender potato chunks. For heat I add a few tablespoons of whole grain mustard.

Okay, so here's my NZ adaptation of the 'Classic Potato Salad' recipe provided by Serious Eats to go with the lab report:

Add potatoes, salt, sugar and vinegar to water in a large saucepan. Bring to boil, reduce to a slow boil and cook until done (test for doneness after about 10 minutes' slow boiling - mine took about 20 minutes to cook through). Drain, peel and cut into chunks (not too small or they'll go mushy).

Transfer warm cut up potatoes to rimmed baking sheet. Spread into an even layer, then sprinkle with vinegar. Allow to cool to room temperature, about 30 minutes.

·
·      Add extras according to preference - the quantities depend on how many potatoes you're using, but the potatoes should prevail:

Taste and mix in gently, according to preference:
Grainy mustard
A little more vinegar or a little lemon juice

Chill for a few hours or overnight - take out of fridge an hour before serving. 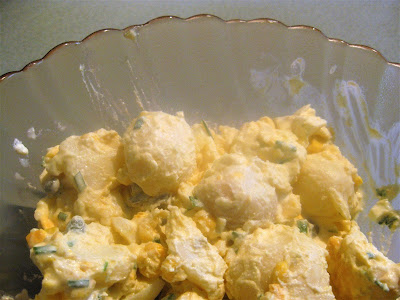 Those who know my blog well will recognise that once again, I took the photo only after we'd eaten most of the potato salad!
Posted by AnneE at 10:56 AM 1 comment:

My son was born on 12 December, a bit close to Christmas, but of course he likes to have his birthday properly celebrated.  This year he planned to have friends round for afternoon tea. As it happens, I was at my friend Joan's birthday afternoon tea a few weeks ago, and she had made a remarkably delicious chocolate cake - not one of those great big high ones, but a much denser, fudgy, chocolatey creation I knew my son would love. (After extensive research, he has decided his favourite cafe chocolate cake is Aro Street Cafe's Chocolate Nemesis - another dense, fudgy number.)
So I asked for the recipe. In the usual fashion, it was given to Joan by Chris, who knew it as Lilly's Truffle Cake, so it's clearly been passed on to a number of eager bakers. Not that I ever really call myself a baker - what attracted me to this recipe, apart from its deliciousness, was how easy it looked to make. On Saturday, I made it for Sunday afternoon.


(Joan's comments in brackets, and mine added in italics. Easily doubled to make a larger cake. In fact I added one third of each quantity, making a cake 25% larger, to fit my 22 cm tin - my quantities in brackets.) 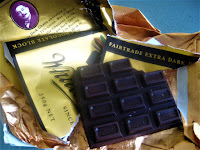 Set oven to 200 degrees (190 fan bake).
Break chocolate into squares and place in microwave suitable bowl.  Add the butter and sugar.
Heat by pulsing in the microwave until it just melts, stirring between pulses to even the heat.  Stop as soon as it melts so it doesn’t get cooked.
Transfer to a food processor. Blend again by whirring for 30 seconds, then add almond meal, or flour, and whirr again.
Add eggs one at a time, whirring until everything is mixed. 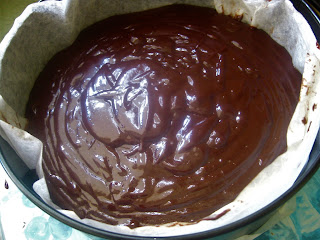 Grease a 20 cm (22 cm) round cake tin and flour.  (I lazily use cooking paper.)
(I lined my loose-bottomed tin with baking paper and it worked perfectly.)
Pour the mixture into the centre of the tin, spread towards edges, and bake in preheated oven for 10 minutes.
Reduce heat to 150 degrees (140 fan bake) and continue cooking a further 30 minutes.
(Joan: In my oven I do it for only  20 minutes, as the longer time dries it out too much.)
(Anne: As I was making a larger, slightly thicker cake, I found it did take close to 30 minutes.)
The centre shouldn’t dry out, and the top should be a little cracked and crusty.
Undercooking is better than overcooking. An inserted skewer or thin knife should come out with a little bit of sticky inside clinging to it.
Leave in tin to cool. 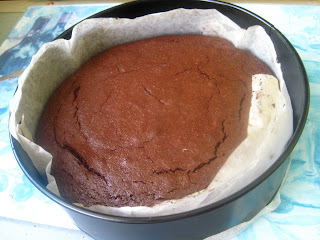 Transfer to plate by inverting onto one plate and then onto the cake plate. Dredge with icing sugar.
(Jonathan insisted on having ganache icing, made with 150 ml cream heated just to scalding point, then poured over 150 g of broken-up chocolate pieces (more Whittaker's) in a bowl and stirred thoroughly until chocolate has melted and ganache is dark. Leave to cool in fridge for about an hour until thick enough to spread over cake.) 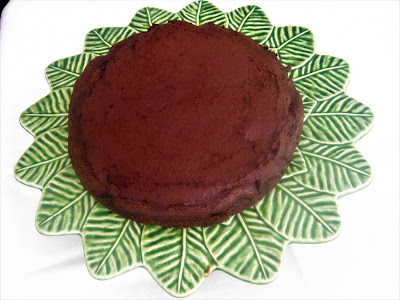 Anne: Jonathan had both, and he also spread sliced strawberries over the top of the iced cake. His friends were very impressed and asked if he had bought it - but of course he pointed out that his mother had made it.  It's extremely rich, so only slender pieces were required - which was just as well, because there was some left for me later (he knew this was a condition of my making it!). Definitely worth the effort... 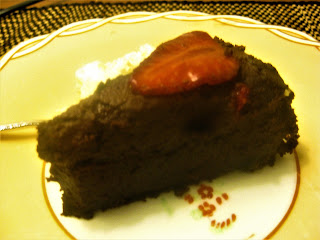