As the dearth of new posts might suggest, things have been going to pot a bit around here lately in the food department. But today I felt like being more creative. In the fridge I had some smoked salmon and a leek, so I looked up Dean Brettschneider's excellent Pie to see what I could do with them. I settled for a simpler version of a tart with both leek and smoked salmon. It's meant to have fennel in it too, but that tastes of aniseed, one of the few flavours I don't like. It had cherry tomatoes on top as well, but I thought that would be gilding the lily. So I made a simpler version, and it turned out very well. It's probably more of a lunch dish, but with bread and a salad, it was delicious for dinner tonight.

- Heat oven to 200C. Use the pastry to line either a loose-bottomed flan tin or a rectangular tin. Chill in fridge for 30 minutes.
- Put a piece of baking paper over the base, big enough to hold blind baking beans and lift them out afterwards. Blind bake the tart case until it is lightly coloured - about 20-15 minutes. Remove the paper and beans. Turn oven down to 180C.
- Trim the leek and slice into rings. Cook gently in the butter. Add a little salt and pepper. Set aside.
- In a large bowl, whisk the sour cream until smooth. Whisk in the 3 eggs. Pour in the cream and grate in a good sprinkle of nutmeg. Whisk gently to combine.
- Cut or break up the smoked salmon into small pieces, put it in a bowl and mix it gently with the cooked leek. Arrange them in the pastry case "in a rustic fashion". (These are Dean's words - nice.)
- Carefully pour over the savoury custard. Dot half-teaspoonfuls of cream cheese over the top. Sprinkle over the thyme leaves.
- Bake at 180C for 25 minutes, until the mixture is just set.  Cool before removing from tin. 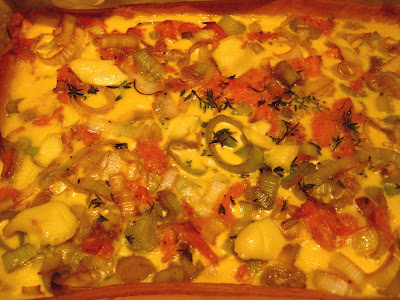 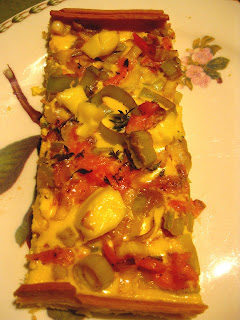 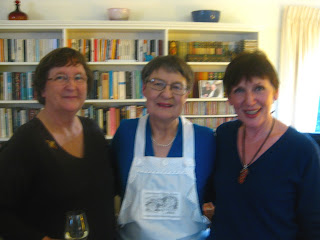 What a week! It started with the launch of The Colour of Food and has been hectic ever since. Lois Daish launched it and Mary Varnham published it. I'm wearing the apron my friend Camille sent me, made of recycled tablecloths.
For the launch I made (with invaluable help from friends) retro food from the 1950s, the sort of thing my mother would make for family parties. Ham sandwiches, Snax biscuits with vintage cheddar and pieces of pickled pear (in Mum's day it would have been chutney but I thought there should be a nod to today's goodies too), and Mum's fudge cake (made by the lovely Sarah from Awa Press). And two large plates of Mum's little salmon sandwiches. Several people have asked me for the recipe, so here goes.
Only it isn't exactly a recipe. The first time my sister and I made these was for the gathering following Mum's funeral in June 2001, almost exactly twelve years ago. We had to marshall our collective memories to work out how she made them. We mixed, tasted and mixed again until we thought we'd got exactly the right balance of salmon and vinegar.

This recipe makes around 80 small sandwiches.
First, you need two loaves of the thinnest sandwich-sliced bread you can find. I used light wheatmeal - I think Mum did sometimes use this too, though she usually used white bread.

Then you need butter or butter-like spread. The classic is butter mixed with a little hot water, but you can also use one of the butter/oil spreads if you prefer.

And of course, tinned pink salmon. No such thing as smoked salmon in the 1950s!
For the launch I used three of the largest (415gm) tins.

Open the tins, drain the salmon and put it in a large bowl.
Add vinegar. Now this is the tricky part.

In my mother's day the only vinegar commonly available was DYC malt vinegar. But this time I thought I could improve on that a little. I didn't want to use balsamic - it's too strong for the salmon. Instead I used Delmaine's red wine  vinegar, with a splash of DYC malt vinegar for authenticity, and also a good squeeze (half a lemon) of lemon juice and a pinch or two of salt (taste it carefully when adding this)..
But I can't tell you exactly how much of the red wine vinegar to use, because I didn't measure it. I just kept adding it in small splashes and mixing it thoroughly into the salmon, and after a few splashes, added the DYC and the lemon juice, then a little more red wine vinegar until it tasted right. I added the salt at the end, tasting again..
My sister and I were surprised how much vinegar it took to get the right flavour. It has to be distinctly sharp and vinegary, but not so much as to completely overwhelm the salmon or make it too wet to use as sandwich filling. You need a damp but still firm salmon mixture that you can spread thickly and reasonably smoothly on the buttered bread. Just try it yourself and see how you go. You might like less vinegar than my sister and I do (only then they won't be Mum's sandwiches).

Assembly
It pays to set up an assembly line! Take two pieces of bread at a time from the packet, open them and spread them with butter. Put them lightly together and pile them up in pairs.
Open each pair and spread one reasonably thickly with the salmon, then close them firmly. Cut the crusts off.
Cut each large sandwich into four, either in triangles or in little squares. (Mum usually made triangles but I opted for squares this time, keeping the triangles for the ham and mustard ones. A sandwich plastic cutter guide like the ones they use in choose-your-own-sandwich places helps, but I didn't have one.)
Arrange them neatly on two large plates and cover them with a damp teatowel until required. (We had finished making them about an hour ahead of time - you don't want to leave them much longer than that.)

Very basic, very retro - and everyone loved them. 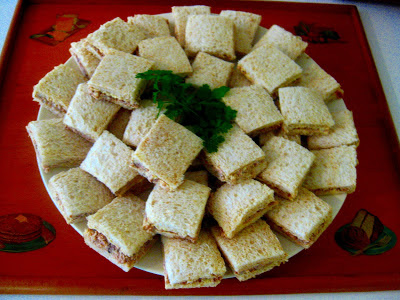 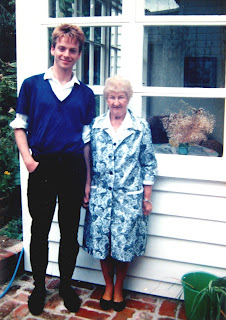 Something else to read, with fudge cake!

To make up for my lack of posts recently, here is the big news: my new e-book food memoir, The Colour of Food: A Memoir of Life, Love and Dinner, is now available online! It gave me a huge thrill to see it there. We're having a little launch for it on Sunday, with retro 1950s food, including the fudge cake made by both my mothers. To find out why I had two, see the book - details below.
You couldn't get a more classic New Zealand recipe than this, and you probably all have it already, but just for fun, here it is (it's in the book as well - there are 23 recipes at the back, matching each era of my life). I'll have to add the photo in the weekend, as I won't have time to make a batch before then. With a bit of supervision at the cooking stage, this is perfect for children to make.

Grease or line with baking paper a shallow oblong tin and set aside.
Put biscuits into a plastic bag and crush with a rolling pin into little pieces (not crumbs).
Put butter and sugar into a medium saucepan and heat gently, stirring, until butter is melted.
Beat egg and cocoa together and add to butter and sugar. Add vanilla essence.
Bring mixture just to boiling point, but do not boil.
Take off heat and gently stir in crushed biscuits to spread them evenly through the mixture.
Add small pieces of ginger, nuts and/or dried fruit as desired.
Spread mixture in tin and allow to set. Using a sharp knife, cut into small bars and store in an airtight container.

How to get my book
For Kindle, go to Amazon Kindle Books here.
For Kobo, go here.