My son had a birthday recently, and he asked me to make his favourite dessert - a plain baked New York cheesecake. The recipe was given to me by the remarkable Augusta Ford, who was on the staff of the teachers' college where my first husband was enrolled. Her husband Bob (who was director John Ford's nephew) was a lifelong socialist and had fought in the Spanish Civil War. As I explained in The Colour of Food (which has a slightly different version of this recipe):


The couple had moved to from in the 1950s to escape McCarthyism. Bob did all the cooking, and dealt with the cleaning by ignoring it. They were immensely kind and generous; at their spartan book-lined house in Glendowie we stowed our sleepy children in the spare room and sat long into the night over giant T-bone steaks, steadily refilled glasses of Spanish red wine, and bottomless pots of ferociously strong coffee.

Augusta didn't just give me very good recipes - she changed my life by giving me Betty Friedan’s The Feminine Mystique, which had just come out as a Penguin paperback. Friedan’s brilliant phrase, “The problem that has no name”, exactly defined how I was feeling about my life at that time.

The only slightly tricky things about making this cheesecake are getting the base properly formed so it can hold the filling - and getting the right biscuits. In New York this was made from zwieback. In NZ the Fords used Biscottes, which don't exist now.  I used to make it with plain digestives, but when I went to buy them last week, the supermarket's entire range of digestives was covered in chocolate. So instead I used a new Huntley and Palmer oat biscuit, with cranberries, coconut and honey, that's meant to be served with cheese. It worked very well indeed.

- Turn biscuits into coarse crumbs by putting them into a plastic bag and crushing thoroughly with a rolling pin, or whizzing in a food processor. Pick out any larger pieces. Put  crumbs in a large bowl  and mix in sugar.
- Use a spoon to work in soft butter.
- Lightly butter the base and sides of a deep, loose-bottomed round cake tin. Cut a round of baking paper to fit the base.
- Press crumb mixture carefully over the lined base and buttered sides to form a case of even thickness and height. (It won't come right to the top of the tin.)
- Put tin in refrigerator to harden for an hour. 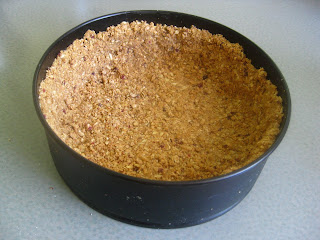 - Place oven shelf a little below middle of oven. Heat oven to 180°C (or 160-170 fan forced).
- In a large bowl, beat cottage cheese and cream cheese together. Lightly beat first egg and add it to cheeses. Beat second egg and add it.
- In a separate bowl, mix together sugar, cornflour and salt. Stir thoroughly into cheese and egg mixture.
- Stir in sour cream, milk (or milk-cream mix) and vanilla.

Baking
- Stand tin with case on oven slide. Pour loose batter carefully into case, until it comes as close as safely possible to the top edge of the case - or, if the edge is a bit uneven, to just below its lowest bit. 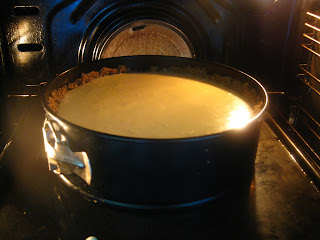 - Bake for 1 hour, until filling is set. Turn oven off and leave cheesecake in it to cool for 1 hour.
- Take cheesecake out of oven and leave to cool to room temperature.
- Run a long thin sharp knife carefully around the cheesecake between the crust and the tin.
- Remove ring of cake tin by standing base on an upside-down bowl a little smaller than the tin, undoing the ring and sliding it down from the base.
- If you are feeling brave, gently slide entire cheesecake, with baking paper still on the bottom, off the tin base and onto a serving plate. If not, leave it on the base, but place a paper napkin or piece of paper towel on the serving plate before you put the cake on it (so that it won't slide).
- For serving next day, store cheesecake in its tin, loosely covered with a plastic bag, in refrigerator overnight. Remove in time to let it come close to room temperature.
- Serve in moderate slices (it is very rich) with a little softly whipped cream, nothing else. 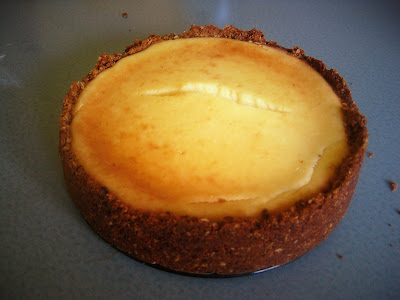 As you can see, mine cracked a bit - I probably baked it slightly too long. But it didn't matter, Jonathan and his friends loved it, and so did I. It was perhaps even better the next day....
Posted by AnneE at 10:44 PM 3 comments:

Email ThisBlogThis!Share to TwitterShare to FacebookShare to Pinterest
Labels: cheesecake

I have an ambivalent relationship with pastry: I love eating it, but get very nervous making it. A couple of weeks ago I found a long-lost recipe for apple tart, and decided I'd use it for a dessert I was taking to dinner with friends. It was a great success, because it tasted terrific (filling recipe another time) and the texture of the pastry was very good - light, crisp and cuttable. BUT the tart case didn't look great, with the edges fallen away altogether in places and crumbly in others, plus it was a bit over-baked around the edges. One other problem: the recipes all seem to be for a relatively small 23 cm tart tin, and that really isn't big enough for six to eight people. My tin is 28 cm. So I have to juggle the recipes a bit to fit.
This week, wanting a lemon tart for dinner here, and determined to do better, I had another go. I consulted various authors, tweaked the recipe a bit, worked out how not to over-bake the edges, and hey presto - it worked. A bit of shrinkage (despite leaving it in the fridge before baking) and one small dip in one side, but otherwise - much better. The filling was very easy and worked well, though I reduced the original sugar a little - I like it a bit more lemony. And now you lucky people can have the benefit of all this mucking around.

Put the flour, butter, icing sugar and pinch of salt into a food processor. Pulse until the mixture resembles breadcrumbs.
Add the egg yolks and 1 Tbsp water. Pulse again until the mixture comes together into one big clump, adding more water if necessary. (It never clumps in my processor. I need to gather a handful up and press it together to see if it’s ready. If not, I add a tiny bit more water and process again.)
Knead the pastry for just two or three times to make it smooth. Wrap the lump in clingfilm and chill it in the fridge for at least 15 minutes.
Lay a piece of baking paper (I need two overlapping pieces, as it isn’t wide enough) on the work surface. Remove the base from the tart tin and lay it on the paper. Using a pencil, draw a circle onto the paper 4 cm bigger than the tin base. (Once you get used to making this you don’t really need to draw the circle, you can guess.)
Dust the base of the tin with flour. Take the pastry out of the fridge and remove the clingfilm. If it’s very firm, leave it to dechill for a few minutes.
For a 28 cm tin, take two-thirds of it, round into a new ball and place in the centre of the tin base, sitting on the paper. Flatten it out slightly. 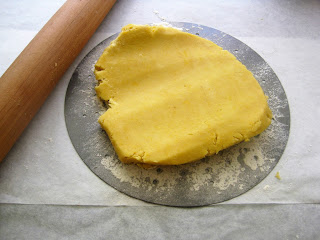 Roll out the pastry, still on the base and paper, so that it reaches evenly out about 4 cm all around the base (to the circle if you've drawn one). As you are rolling out, turn the pastry by turning the paper.
Gently fold the pastry surrounding the tin base in towards the centre. Carefully lift the tin base off the work surface, drop it into the tin, then ease the pastry into the corners and up the sides of the tin, leaving a little overhang on the rim and then gathering it up to form a firm edge which rises a little all around above the top of the fluting. If the pastry cracks anywhere, press it together to seal. (If necessary you can grab a little bit more from the rest of the original ball to fill any awkward bits. Then put the leftover lump back into clingfilm and freeze for later use, such as little mince pies.)
With a sharp knife, trip off the edge all round to form a neat flat top edge. Lightly prick the base with a fork, but not quite all the way through. Place the pastry-lined tin in the fridge for at least 30 minutes. 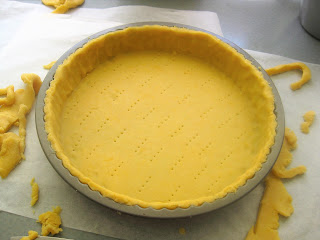 Preheat the oven to 170C fan bake (or 190C without the fan). Line the pastry case with a rough circle of foil, dull side up, sticking up all around the fluted sides and hanging over the top edge a little. Fill with ceramic baking beads or dried beans.
Bake blind for 12-15 minutes, until the pastry is set, then lift out the tin and remove the foil with the beans in it. Put the tin back and bake for another 5-10 minutes (watch it very carefully) until the case is pale golden and completely dry. Leave aside to cool as you make the filling. Reduce the oven temperature to 150C fan-bake (160C without fan).

Break the eggs into a large bowl and whisk together with a wire whisk. Add cream, sugar and lemon juice. Beat together well. Stir in the zest.
Pour filling into jug and fill cooled tart case, but not quite full. Pt tart into the oven and finish filling it when it is safely inside. (This can be a bit tricky - you may well need a smaller jug to do this last bit - but it does avoid any spills getting the tart into the oven.)

Bake until filling is just set – 30-35 minutes.
Take out tart and leave to cool until pastry comes away from the sides of the tin.
To remove the tart from the tin, place the base of the tin on an upturned bowl and let the outer ring fall to the bench.
Place the tart on a serving plate and serve warm or cold, dusted and/or decorated as you wish – or not, plain is fine.  (In my case I always leave it on the base, it's too nerve-racking to try removing it – you may be braver. If it is still on the base, put a paper napkin or piece of paper towel under the tart on the serving plate to prevent a sudden dramatic slide as you carry it to the table.) 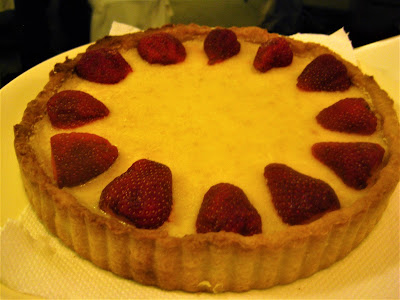 Well, it wouldn't win any A & P show prizes, but you must admit it was a much better effort than before. Most importantly, it tasted wonderful.