Christmas comes but once a year...

...which is just as well, given the amount of food on offer at my sister's.
We started mid-morning with bubbly and a three-course brunch - jewel-bright fruit salad and yoghurt, little bagels with smoked salmon and cream cheese, croissants with bacon, baked mushrooms and tomatoes.  That lasted us very well until the main event at about 4 pm... 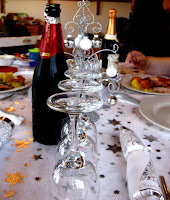 ...glazed ham and deboned stuffed turkey, roast veges, and beans picked from the garden. My sister is the only person I know who owns a ham stand, though in this photo it's almost invisible and the ham seems to be poised in mid-air. 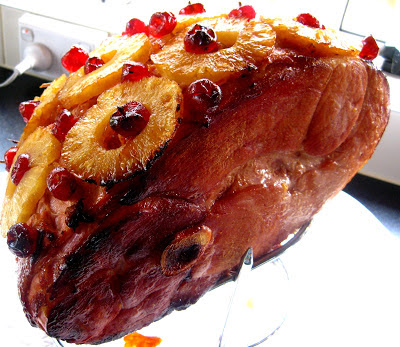 After a decent interval, while my great-nephew retired from the excitement of his first Christmas, we moved on to the double dessert - my niece's pavlova and/or hazelnut ice-cream gateau, followed by the pudding that flew up from Wellington with me. My sister made the brandy sauce, my niece contributed the brandy butter, and my nephew flamed it with great panache. 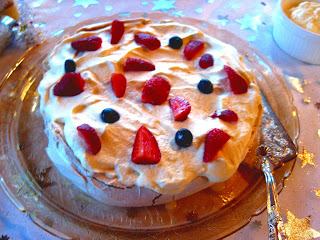 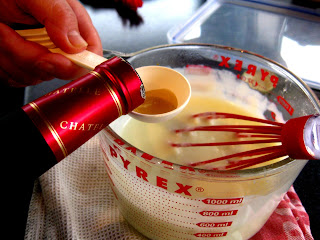 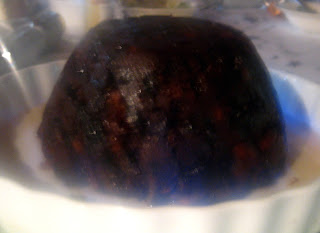 You can just see the flickering blue flames in the photo (the lens was a bit steamed up by this time). It turned out perfectly, and I think it was (she said modestly) one of the best puddings I've ever made - not sweet but rich, moist, fruity and tangy from the extra peel and the bits of dried apricot I added this year. We finished it off for Boxing Day tea, along with leftover ham and turkey, new potatoes, fresh garden salad, and the remains of the pav. All very traditional, and totally delicious.
Posted by AnneE at 10:48 PM No comments:

Email ThisBlogThis!Share to TwitterShare to FacebookShare to Pinterest
Labels: Christmas

I love Christmas mince pies - only in my case they're tarts, because I don't put a top on them. My friend Ali usually gives me a jar of her magnificent mincemeat, and in the past I've used bought pastry, so they took no time to make. But for obvious reasons my usual pattern has been upset in both 2010 and 2011, so no tarts were made, meaning I ended up with a stash of vintage mincemeat. It kept perfectly, as it's designed to do, so this year I offered to bring it up and make tarts for Christmas at my sister's. I also offered to make the pastry, using the Cordon Bleu recipe I wrote about earlier (go to "pastry" in the labels). So today that's what I did.
The actual mixing was easy, though I hadn't actually made this sweet short pastry before. I wanted to do it all in one day, so there wasn't time to chill it overnight, though it did have a couple of hours in the fridge. That was probably why it was soft and very prone to break up when I rolled it out. But I was making very small tarts, and it was no trouble to mend any little cracks with scraps of pastry. (Not very Cordon Bleu,  I know, but it worked.) I didn't blind bake the cases, I just put the mincemeat in and baked each tray of 12 for 9 minutes at 200C (not fan bake). They taste much better well baked like this than pale and anaemic.
I can't show you them because I can't work out how to get the photo from my iPad into this post! But if you go to the Facebook page you can see them over there. We ate the less pretty ones to see if they were okay, of course, and they were lovely, crisp and rich, just as they should be.

Fooling around in the sun 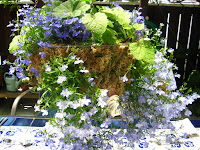 For the second day running, Wellington managed to reach 20C. I had the good luck to be going out for lunch with friends who have a lovely blue tiled table on a covered courtyard, the perfect place to eat outside - especially under Lesley's baskets of cascading blue flowers.

Beneath them, we ate ittle stacks of garlicky tomato and eggplant... 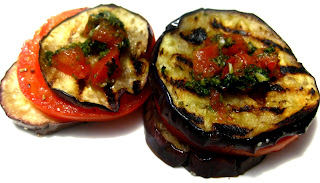 ... then terakihi fillets rolled around a fragrant filling of cashew nuts, chili, lime and coriander, with green salad from her sister and  brother-in-law's garden, and crisp brown foccacia... 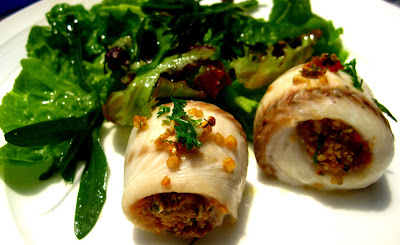 ...and palest pink fool, made from Lesley's own gooseberries (Harvey's favourite early summer treat) and rhubarb. 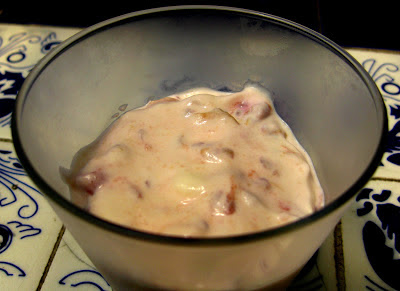 Fruit fools are thoroughly English desserts, and apparently gooseberry fool is the earliest kind known, dating  back to the fifteenth century. The introduction to Elizabeth David's first recipe for it (in Summer Cooking, 1955) takes you straight back to wartime privations: "Although this is a traditional English dessert it is not often well made, and owing to the lack of cream for so many years a good many people have never made it." Her later recipe in An Omelette and a Glass of Wine (1984) is a better one (I've turned the measurements to metric here).

Gooseberry fool
1kg green gooseberries
250g sugar
300ml cream
Wash the gooseberries. There is no need to top and tail them [though Harvey always did]. Put them in the top half of a double saucepan with the sugar and steam them, or bake them in a covered glass dish in a low oven, until they are quite soft.
Sieve them, having first strained off surplus liquid which would make the fool watery. [I think this is the point at which you should taste for sweetness and add more sugar if the puree is too acid. Harvey preferred his quite tart, I like mine a little sweeter.]
When the puree is quite cold, add the cream. [Elizabeth David didn't whip it, but our cream is not the same as English double cream, and Lesley, like me, prefers to whip it softly before folding it into the puree.] Serve very cold. 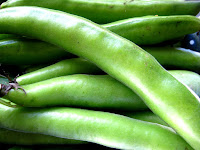 Before my neighbour with the brilliant garden went away last week, she brought me some broad beans and invited me to help myself to more. I was over there first thing next day.

I used to think I didn't like broad beans, but that was because I'd only ever had them when they were older and tougher and still enveloped in their wrinkly grey outer skins. Then Lesley showed me how to ease out the little bright green inner beans, and I was hooked. But they're hard to buy young enough to be really good - much better to be able to get them fresh from the plants, before they get too enormous. The way we humans eat them is of course terribly wasteful, because only the very youngest, tenderest beans can be eaten still in their pods. I did manage to do a few this way, boiling them briefly, but most of the pods were steamed in a colander for a few minutes, then opened, and the beans extracted. I ended up with a huge pile of pods and a small bowl of beans. 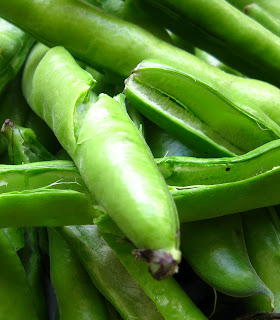 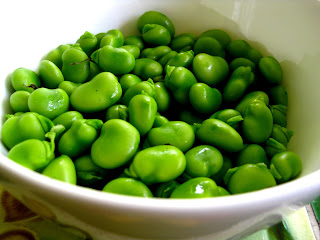 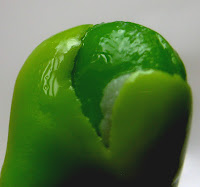 I shucked the largest beans from their slightly wrinkled skins, but I couldn't bear the waste of all that green goodness. So I kept the outer skins and pureed them later with lemon juice, oil and salt to make a flavourful dip, and left the rest of them intact. 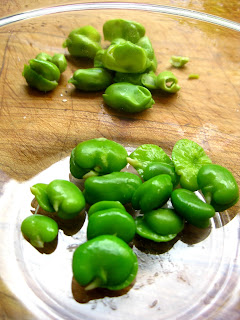 I was having two friends over for a Good Dinner that night, and I wanted to do as little as possible to my beans. So I made a simple first course - skinny asparagus wrapped in very thin slices of Serrano ham, and a little pile of beans with torn basil and grated pecorino cheese, plus a wedge of lemon and drizzle of excellent olive oil (from Moon over Martinborough, one of the best goodies we were given at the food bloggers' conference - I'd been hoarding it for the right occasion) with some good bread to mop it all up. The beans, like the asparagus, were warm, so the thin flakes of cheese melted into them, and then they melted into us. 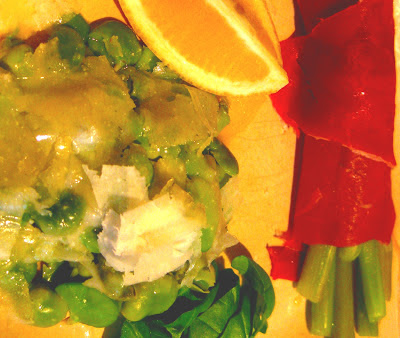