Over the last four weeks I've been cheered by some small pleasures, mostly brought by sympathetic friends, and often turning up at exactly the right time to take me out of myself and lift me over a rough patch.

First there were the beautiful blueberries Lesley grew on her Karori bushes, the offspring of the ones she grew in Taupo. She gave me some just before Harvey died, and more just after. I can't show you a picture because I've eaten them.

On Christmas Day itself, my friends turned up with a whole tableful of nourishment, including this platter of no less than seven different kinds of what can only be described by the medieval term of sweetmeats. Fortunately I had many people over the folllowing week to share them with. 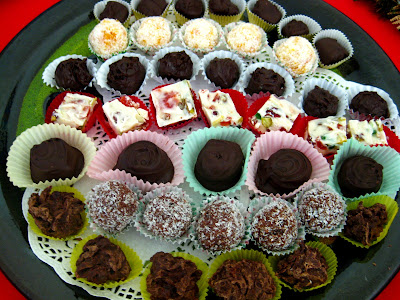 On the Monday, Ali came to stay with me. She brought her home-made bread, a delicate French sauce to heat up slices of ham in, and my delayed Christmas present - a whole home-made panforte. But I forgot to photograph it, and now it's all gone (I cut up the last piece for last night's dinner, to eat after the cheese). Later others brought cardamom shortbread, lemon pesto, madeleines, and a certain superb small fruitcake...
On the day of the private funeral, Harvey's niece flew up with a freshly caught and cooked crayfish. I ate it with my sister and brother-in-law, who stayed on for the weekend to look after me. There was a little bit left, and on the Monday, when everyone had gone, I ate it creamed for lunch. 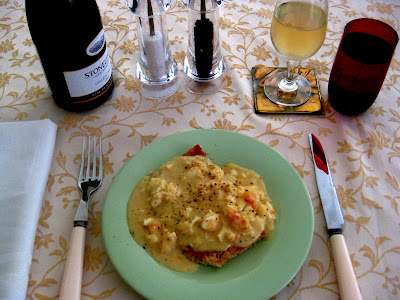 A few days later, Lois gave me this beautiful little box of macarons - I didn't know you could get the real thing in Wellington. I ate all four of them - strawberry, coffee, vanilla and lemon (the best) - in bed one night after dinner. 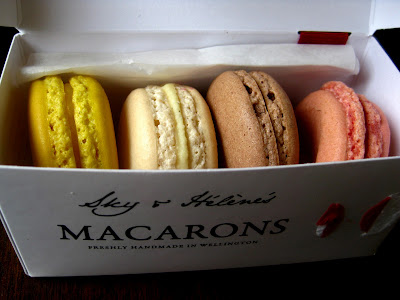 Now it's my turn to provide. Jonathan and his friend Eric have arrived, and for a month I will have people to cook for and eat with every night.
Posted by AnneE at 12:04 AM 2 comments:

In the three weeks and a day since Harvey died, I've eaten dinner on my own nine times, mostly in the last two weeks. One night, I took myself over the road to Flavours, the local Indian restaurant. I felt perfectly comfortable eating alone in their upstairs room that catches the late summer sun - and there was enough curry left over to bring home for another night.
I haven't done much shopping and I've been inclined to eat pasta and rice - I haven't felt like cooking red meat, though I'm happy to eat it when I'm out and someone else cooks it for me. The remains of the Christmas ham have come in handy too. 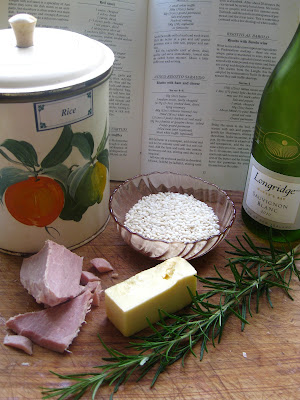 It was the last of the ham that inspired me to cook myself a lovely risotto, from the Piedmont and Valle d'Aosta section in Claudia Roden's The Food of Italy. Even Harvey, never a great rice lover, enjoyed this one, though I didn't make it often. The first time I must have had some rice which, though it was labelled arborio, took ages to absorb the liquid and put me off trying again. But eventually I did, with different rice, and it worked much better.
This time, as well as good ham, I had good stock too - I'd made it from a smoked chicken carcase, and put it in the freezer. It's strange cooking with things I made, or even just bought, before Harvey died. Such a sudden line drawn across life.
Anyway, here's the recipe - I made enough for two servings and froze half, I don't know how successful that will be. But here I've given the original quantities (only with rather more ham and cheese) to feed 4-6 people. It's very comforting food, a bit like a savoury rice pudding.

Melt the butter over low heat in a saucepan, add onion and cook gently for 5 minutes until soft but not coloured. Add ham and cook 1 minute, then rosemary and rice, stirring until the rice is transparent. (Mine never seems to go transparent properly but it doesn't matter.)

Add wine, stir and cook until it's absorbed. Add stock a ladleful at a time, stirring until each is absorbed. After about 20 minutes the rice should be creamy but al dente. Stir in fontina or gruyere cheese and cook for another 5 minutes.

Serve in warmed pasta plates with parmesan scattered over the top. I had this with a tomato and basil side salad. 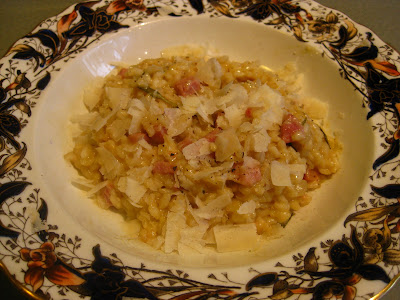 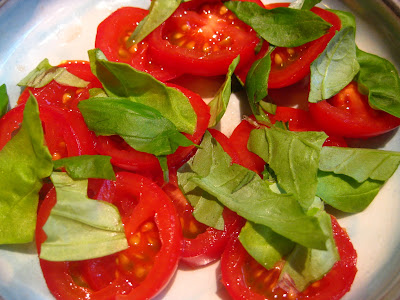 On Tuesday 4 January I went to the supermarket for the first time. There were so many things I no longer needed to buy. But when I tried to think what I should buy, I simply had no idea what I wanted.
I wandered round very slowly, trying to work out what to do. I knew I had Lynn coming round Wednesday night and Frances for dinner on Friday, so I bought ravioli and chicken. Bread - there was none left.  Milk, garlic, wine. That was about it.
Ever since I started shopping and cooking, after I first married at nineteen, I've had a  framework of other people to work within. Now all that has vanished and suddenly there's only me. 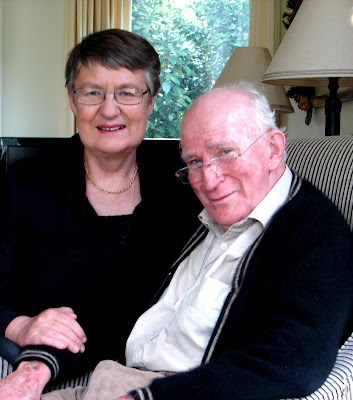 Email ThisBlogThis!Share to TwitterShare to FacebookShare to Pinterest
Labels: on my own
Newer Posts Older Posts Home
Subscribe to: Posts (Atom)