I've been in England since 12 October. Several friends have asked how I'm finding the food after France. I have to say that, as I've been staying with friends, I've been relishing home-cooked breakfasts, lunches and dinners. Bacon! Mashed potatoes!  And tonight, smoked trout and mackerel! In Cheshire my lovely hosts produced many good things, including a glorious board of entirely English cheeses - Leicester, Cheddar, English Brie, Stilton... all of them excellent. 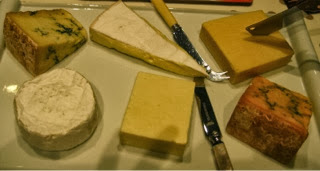 Now I'm in London for the first time since 1995. Today my friend Sandra took me to the cafe at the top of the National Portrait Gallery for breakfast. There's a stunning view over nearby London, including the lovely wreathed dome of the National Gallery. I eschewed eggs Benedict, etc in favour of nursery food: two boiled free-range eggs with a generous pile of toast soldiers drizzled with Marmite, and a pot of proper loose-leaf tea. Bliss. On Thursday I'm going to have dinner with a friend at another venerable London institution, the Spaghetti House in Goodge Street. What will life serve up next, I wonder? Meanwhile the New Zealand Listener has published what I consider to be an excellent review of my food memoir in the 17 October issue. Very satisfying!

The joy of a flat white and Kiwi chat in Lyon

On a long trip like this, especially when you're on your own, there will inevitably be a low point where you just want to hide in your room. Mine struck  early this morning. Then I opened Facebook and found a message from Rosamund Morris James. With her French husband, she runs Cafe Mokxa - La Boîte au Cafe, a Kiwi coffee shop in Lyon with properly roasted coffee. Mary Evans had posted me about her. So here she was, inviting me to come in this morning when she'd be there. I googled her location and saw it wasn't far from the metro stop I mastered yesterday, and it was on the way to Croix Rousse, the Hill of Work - silk weaving in particular - which had seen brutally repressed revolts for a minimum wage. I wanted to go there to see the museum. So I instantly felt better, got myself organised and trotted off, looking forward hugely to a Kiwi chat and hoping desperately that they would have flat whites.
And there she was, with a warm welcome and her perfectly trained baristas turning out the finest coffee in Lyon. It's not just me saying that - the cafe is already well known and has been getting rave reviews. Now they're planning to open their own bakery as well. I had a wonderful time talking to her - and yes, having not one but two flat whites. With ferns on top.
See for yourself at http://www.cafemokxa.com 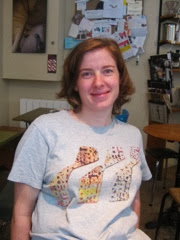 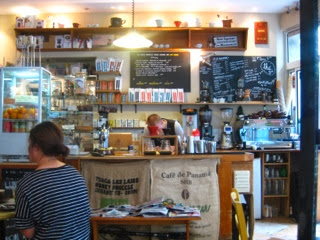 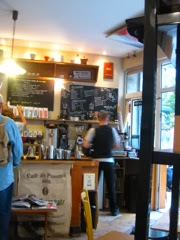 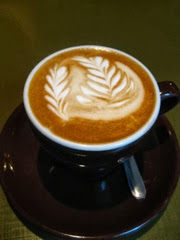 After two and a half weeks I'm still a little bemused by French food. I understand the conventions, and have a reasonable grasp of the complexities of what you can eat where and when. But what I hadn't reckoned on is the Lyonnaise determination to ensure that there is not just enough food, there is too much food ( well for me, anyway). Up until now I've always been confident that French restaurant " formules" worked perfectly well because the helpings were small, so you go for that appealingly affordable three- course option. Not any more. The helpings in Lyon are enormous. I am having to learn to leave some, no matter how delicious. I had resolved to have small dinners but tonight I ended up over in Old Lyon, the world heritage listed  area of largely Renaissance buildings on the further bank of the Saone - I'd just been on an excellent guided walk there. 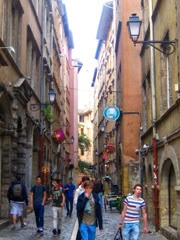 It's filled with restaurants all claiming to be "veritable bouchon Lyonnaise" , renowned for low-priced menus of Lyon classics. So I decided I had to stay there for dinner, as it would be my only chance - it's too far to go back to at night from the hotel.
But where to go? I did what the French do - wandered round reading all the menus. One caught my fancy, Les Paves de Saint Jean. It looked cheerful and well-tended ( in Lyon red checked tablecloths don't mean " tourist trap" as they do in most cities) and  offered a three-course "Menu Bouchon" for 15 euro, considerably less than I'd been paying over near my hotel in Presqu'ile. But most importantly, I could see how to put together a dinner of homely Lyonnaise classics I would really like, without going near tripe, etc. And they had fillettes of decent wine - 250 ml, two glasses - for 6 euro.
It was only 6 pm, too early for dinner - they don't start serving till 7 - but the patron heard me asking the waitress and called out that for me, they could manage 6.30. So I sat happily in the warm light evening with water while the staff had their dinner. Then came the food. First, a Salade Lyonnaise - very like a Caesar salad but without the anchovies or Parmesan - it has a delicious tangy dressing all its own. I had been dreaming of poached eggs, and it comes with one. 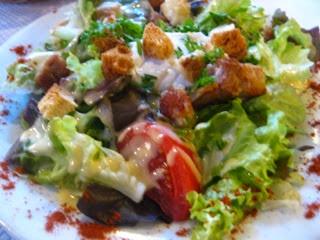 Then the local sausage, with a lovely rich sauce (i tasted cloves in it, I think) and plain steamed potatoes, exactly what I wanted. 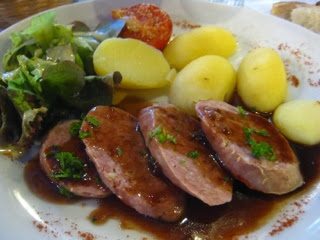 There was, as usual in Lyon, far too much, and I did manage to leave some, assuring the staff that it was tres bon but just un peu trop ( sorry, blogger doesn't do accents on the iPad) - especially as I wanted to leave room for dessert. They were all maison (made on the premises) and I was ushered in to look at them all, under their big glass cloche or in the fridge, and choose. The praline tart was said to be tres typique, so I had that. A luscious texture, very sweet but satisfying. 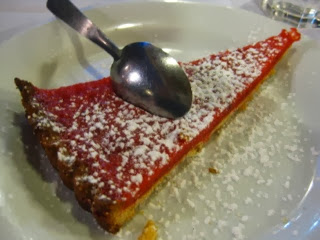 This time I didn't mind taking photos. I told them I was a food writer from New Zealand ("Ah" said the waitress, " i thought i could hear a little accent", which i took as a compliment). Then i took two more outside. While I was having dinner, a steady stream of French customers arrived. I've made a few foolish decisions about food in France, but tonight everything was perfect. 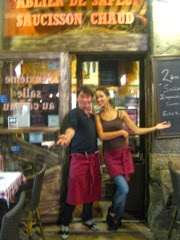 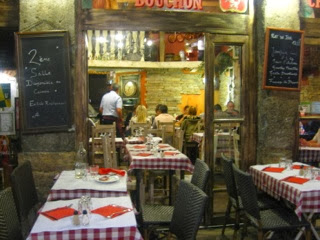