I see that I haven't put a post up since 1 May - shocking. No real excuses at all, simply a fit of winter slothfulness and avoiding coming up here to the main computer (which is much easier to write on than my iPad) because it's warmer downstairs.
But this long gap doesn't mean I haven't been cooking - quite the opposite. What I tend to do quite often these days is get an idea, look up several different recipes related to it, then pick and choose bits of them and assemble my own version to suit the ingredients I have on hand, the amount of effort I want to put in and my own judgement about what will work best.
Earlier this month I had a (not very significant) birthday. There have been a series of delightful lunches and other outings with friends, with at least one more to come. But generally the evenings have been spent at home, sometimes cooking for friends. On my actual birthday, though, I was home alone, so I made the most of it.
Harvey loved oysters, and so do I. But he wanted to eat them in only two forms: completely au naturel, with lemon, pepper and thin bread and butter, or battered and deep fried. (Sent up the road to get a parcel of fish and chips for dinner, he was very good at turning it  into something much more sexy by throwing in a dozen oysters.) So when I saw a $10.95 oyster special at Countdown, I decided I would break out and do something different with them.
The pottle turned out to contain six very large oysters. I ate two all by themselves as a starter, then set about turning the rest into a sauce for pasta. I looked at half a dozen recipes and came up with my own super-simple version.

Pasta with oysters for one
(Just size it up for more servings - hungry people may well eat 100g of pasta each. The quantities for the wine and cream are only approximate, since it depends on the amount of oyster liquor, the size of the oysters, and how oystery you want it to taste.)

Cook the pasta in a large pan of boiling salted water. When it is al dente, remove 2 tablespoons of the cooking liquid and reserve. Drain the pasta, return to pan, stir in a small piece of the butter, and keep warm.
In a shallow non-stick pan, gently cook the bacon pieces in their own fat, remove, and set aside.
Melt the butter and gently saute the leeks. Remove and set aside with the bacon.
Drain the oyster liquor into the pan and add the vermouth or wine and the lemon juice. Bring to the boil, turn down to a simmer and put in the oysters, cut into pieces if they are large ones. Poach the oysters for 2 minutes, remove and set aside.
Warm a wide shallow pasta plate.
Increase the heat under the pan, add the 2 Tbsp saved pasta water, and boil gently until the liquid is reduced to about 1/2 cm in depth in the pan.
Turn the heat down to low. Put in the bacon, leeks and oysters. Stir in the cream and heat gently through. Check seasoning.
Put pasta in plate and pour over the sauce. Grind more pepper on top to taste.
Eat immediately with a glass of your favourite dry white. (Gruner veltliner is my favourite with oysters, but there are plenty of other good choices.) 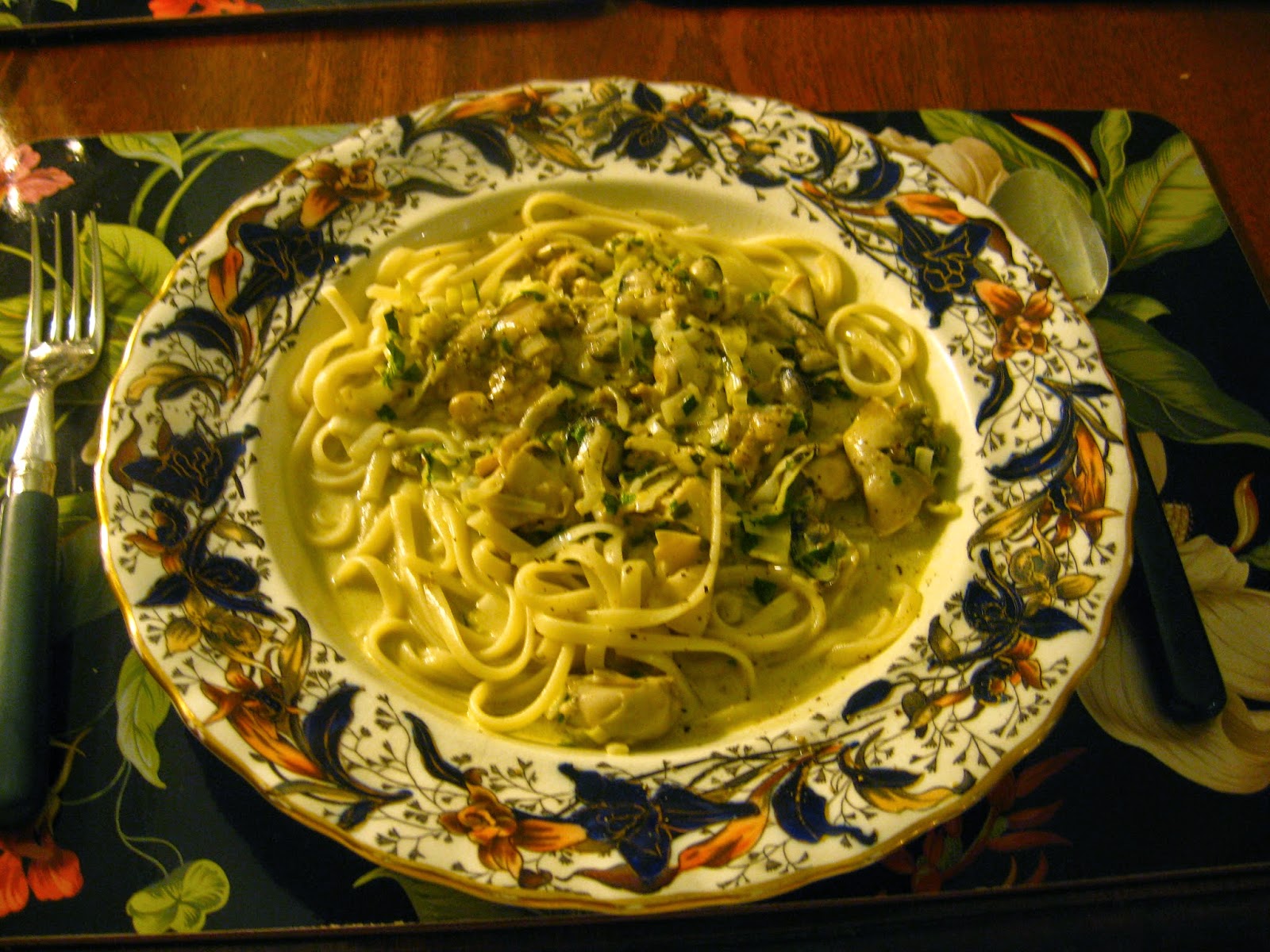 This is one of the fastest dinner dishes I've ever cooked - and one of the most utterly delicious. I ate it making small appreciative noises to myself, and telling Harvey's photo that there were indeed more than two good ways to eat oysters.
Posted by AnneE at 4:00 PM 2 comments:

How the pork got stuffed

I've always admired stuffed food - literally stuffed, that is, not "ruined" or "gone wrong" or "completely had it". But it can be a bit intimidating to tackle. I'm a dab hand now at stuffed mushrooms, and I can manage to stuff some large veges, but there's a piece in my book about failing to make a stuffed chicken. And until a couple of weeks ago I'd never stuffed a pork fillet. 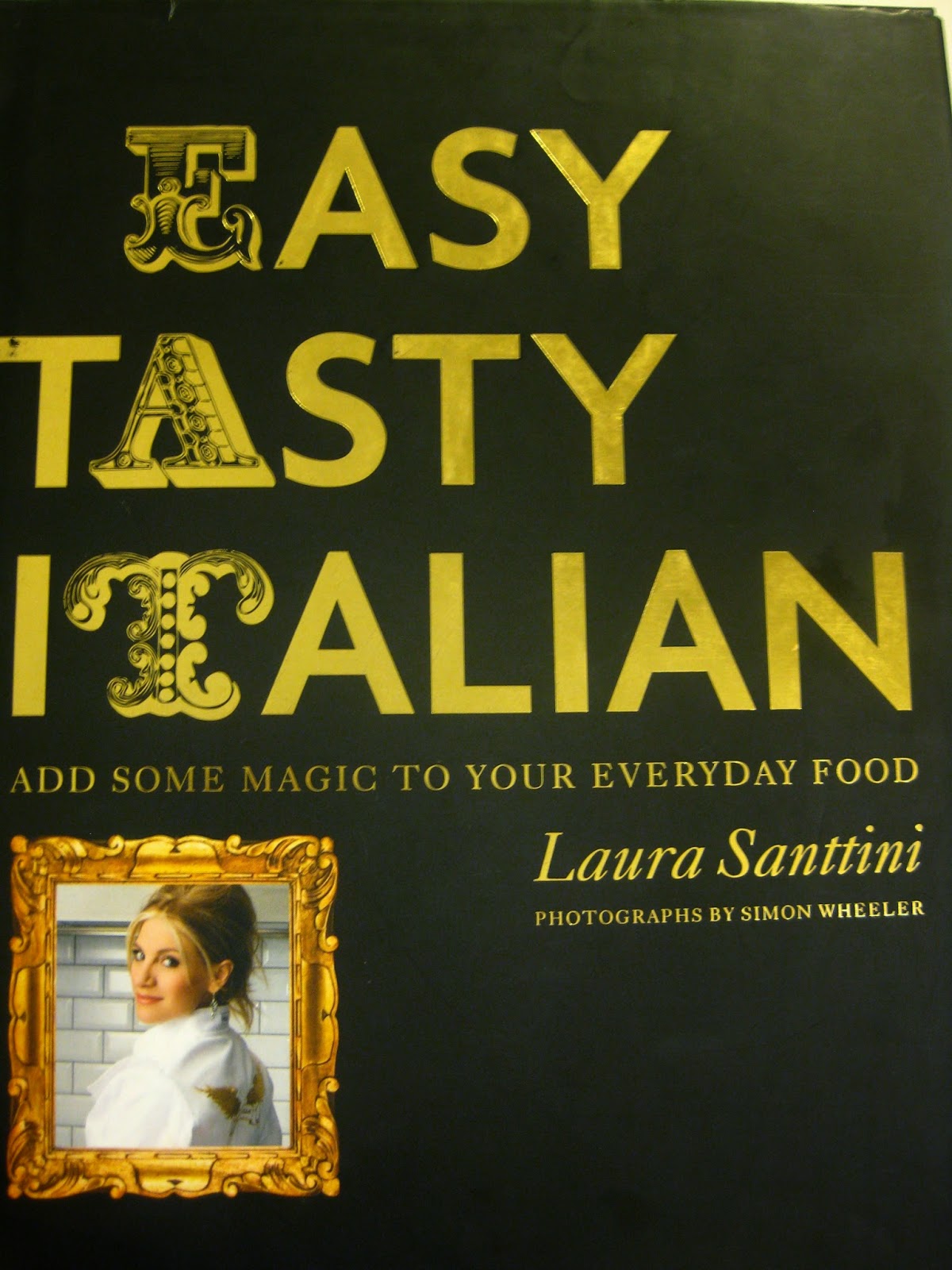 I had quite a small one on hand for dinner with two women friends, and I wanted to serve it with the lemon risotto in my last post. So I leafed through my Italian cookbooks. The newest one is Easy Tasty Italian, by the very glamorous Laura Santtini, and it had exactly what I was looking for: pork fillet stuffed with artichoke and bay.

Only instead of cutting a pocket in the side, as she suggested, I decided to try making a hole and pushing the stuffing down along the length of the fillet. The cooking method was my own invention, because I didn't want it to dry out. I only experiment like this with very good friends - fortunately it all worked remarkably well.

Pork fillet stuffed with artichoke and bay paste
(after Laura Santtini. Serves 4 delicate eaters, 3 moderate ones or 2 hungry ones.)

1 small pork fillet (sorry, I forgot to note what mine weighed, but it was about 6 cm in diameter.)
For the paste:
85g artichoke pieces in olive oil (from a jar), drained
2 bay leaves, as tender as possible
1 garlic clove
1 Tbsp olive oil
1-2 pinches of salt flakes
freshly ground black pepper
To cook:
150ml white wine
large oven bag

Set the oven to 170C.
Blend the paste ingredients together, adding a little more oil if it's too thick.
(I did mine in the food processor. I needed to pick out the remaining larger bits of bay leaf, but most of it got successfully ground up.)

Push a long thin knife into the pork fillet, not quite to the end, and wriggle it around.
Using your fingers, stuff a little of the artichoke mixture into the hole.
Using a long thin wooden spoon handle, gently push the mixture as far down the fillet as you can.
Repeat until you've used up all the mixture and the fillet is full of stuffing.

Put the fillet down into the oven bag so it's resting across the bottom of the bag, and add the white wine.
Fold the bag over loosely so the wine can't escape, and place it in a roasting pan.
Cook it for about 25 minutes.
(The pork will turn pale and be fairly firm to the touch. It will swell and become shorter. Some of the stuffing may ooze out, but this doesn't matter.)
Carefully pour off the white wine and meat juice and save it for another use. Remove the pork and rest it on a warm dish under a teatowel for 15 minutes, while you prepare a long warm serving plate and the accompaniments - mashed or boiulanger potatoes, for example, or that lemon risotto.
To serve, slice the pork neatly across to show the stuffing. Some of it escaped in mine, but that did not matter in the slightest. All very satisfying, to make as well as to eat.