High time I posted something new here! To be perfectly honest, now that I'm feeding my son as well as myself, I do tend to take a few shortcuts (such as buying trays of marinated spicy chicken nibbles) instead of doing everything from scratch. On the other hand, the "eat more vegetables" plan is going quite well - and having him here certainly makes it easier to buy a bigger variety of veges for the fridge, because we get through them much more quickly.
Last week he bought a few courgettes when it was his turn to cook, and there were two left. They're quite expensive now, so I wanted to make the most of them. I had some bacon, and enough red cabbage, celery and pepper left for one last salad (that cabbage has done us proud). Courgette fritters would be delicious, but I needed to make these two go further. So I decided to look for a recipe for courgette and potato fritters.
A good one came up immediately on Kidspot. This is a great site - and not only for kids! It has straightforward, easy recipes which seem to work well. This recipe certainly did - though as usual, I did change it a little bit. I didn't want to include the corn kernels, so I used slightly less flour and milk. I also used white flour rather than wholemeal, and sunflower seed oil rather than olive (I do find the lighter oil is better for frying crisp little morsels such as fritters - though perhaps that's because I use a bit more than this recipe suggests!).
My fritters were excellent. They cooked quickly, right through, no soggy bits or uncooked potato. I've given you the original ingredients so you can make your own decisions about how closely to stick to it. The mixture looks quite wet, but it doesn't need more flour.

Turn oven to low heat (or to Warm setting).
Grate potatoes (you can do this in the food processor), then squeeze out excess starch/moisture with your hands over the sink.
Grate courgettes and squeeze out excess moisture. You should end up with about 1 cup of grated courgette.
In a large mixing bowl mix grated potatoes and courgettes together. Mix in onion, corn, flour, baking powder and paprika.
Whisk egg and milk together in a jug. Add to other ingredients and stir to combine. Season to taste.
Heat oil in a large frypan over medium heat. Drop in spoonfuls of mixture. Fry for 2-3 minutes on each side until golden. Repeat with remaining mixture.
To keep all the fritters warm, place the cooked fritters on a tray lined with paper towel in the warm oven while you cook later batches. 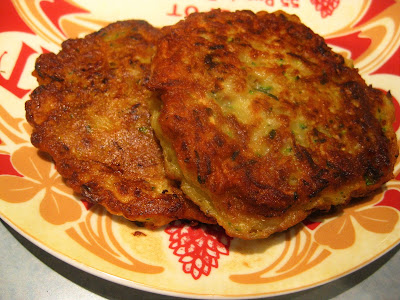 The recipe says they freeze really well. Wrap individually in cling wrap. When you’re ready to eat them, preheat oven to 190°C, place on a tray and heat for approximately 10 minutes from frozen.