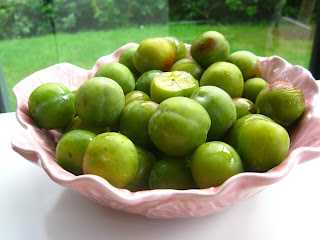 I'll be away until 1 April - my housesitter will miss Dorothy. I'm off to explore the Deep South  - I've never gone down past Dunedin before. Maybe I'll encounter the legendary Cheese Rolls! Meanwhile here are pictures of the beautiful greengage plums I baked with brown sugar in the slow cooker this week - the last of them will do for dessert tonight after Indian takeaway curries with friends - and the salmon fishcakes I made on Monday night to commemorate Dorothy, using up the tin I'd opened for her last breakfast. 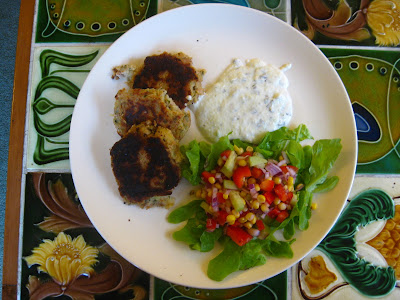 Tarte tatin - with an Auckland twist

I stayed with my family and with three different friends in Auckland. I'm lucky - they're all really good cooks. On Monday I went to Milford Mall, and saw a display of cookware which included a dish labelled as being for tarte tatin. I'd seen these before but I had never realised that was what they were for. It had odd downward-sloping handles, making it easy to turn the dish over at the end and get the tarte onto a plate - it's often translated as "upside-down apple tart".
The next day I went to Camille's, and she'd asked a mutual friend round for dinner. On her shelves I saw the same dish. She'd bought it in France, and used it often, but hadn't realised exactly what it was for. So I offered to make a tarte tatin for dessert. 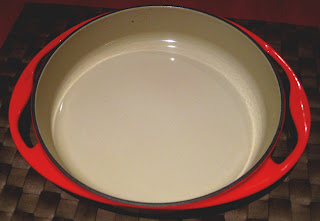 I found a Peta Mathias recipe and adapted it a bit, according to what I could remember of the recipe I use in Wellington, which comes from a book brought back for me from the Loire Valley by a friend - The Cuisine of the Kings (with no author's name). It's essential to have a shallow, solid, flat-bottomed pan, preferably with handles, which can be used both on top of the stove and in the oven.

Tarte tatin
(the proper name is Tarte des Demoiselles Tatin, the tart of the Misses Tatin, after the sisters who were said to have invented it and served it in their restaurant)

1 kg firm, tart apples (Cox's Orange are good, but Granny Smith will do, providing they're fresh and firm)
75 g butter (this is half the quantity in my French recipe)
50 g sugar
2 sheets frozen puff pastry (If you're clever, make your own)

Peel, quarter and core the apples. Thaw the pastry sheets. Preheat the oven to 200C.
Put the butter and sugar into the pan and heat it until the butter is melted.
Fit the apple quarters into the pan, core side down.
Cook them for about 10 minutes until they begin to soften and the butter and sugar begin to caramelize.
Carefully turn them over and cook again while the butter and sugar continue to bubble and caramelize. You need to make sure nothing is burning, so the heat should not be too high, but you want the apples to soften while retaining their shape, and go a lovely golden brown on their rounded side. (My French recipe says to put the dish with the apples into the oven instead - this works okay too, but I got better results doing it on the stovetop.)

Leave the apples to cool a little while you join the pastry sheets carefully together, using a pastry brush and milk, to make a sheet big enough to fit completely over the pan and hang down a bit all round.
Trim it off in a circle around the pan, leaving enough extra to tuck in neatly around the apples.
Place the pastry over the apples and brush the top with milk. Bake for about 15 minutes until golden brown.
Cool for 5 minutes. Place a serving plate over the pan - it should be a little larger than the pan.
Turn the pan over holding the plate in place, so that the pastry is on the bottom and the apples are on top. Serve with cream and/or with this sauce, which is used in my French recipe.

Mix all ingredients except the spices in a saucepan, bring to the boil and cook for 2 minutes. Blend in the spices. 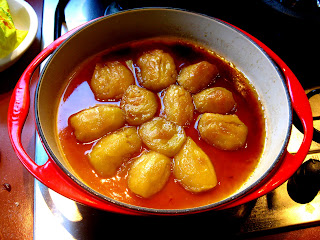 When I made this at Camille's, I didn't have enough apples and they shrank too much when I cooked them. She had a bucketful of feijoas from her tree, so before I put the pastry on, I cut some in half, scooped them out and put them cut side down around the apples to fill up the dish. 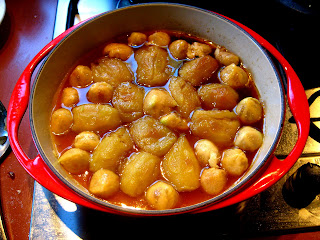 Then I put the pastry on and baked it well. 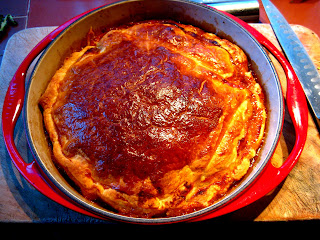 The result was fantastic - the delicate, sharp scenty flavour of the feijoas combined perfectly with the caramelly apple. I wish I could grow them in Wellington. And that dish worked so well - it was by far the best tarte tatin I've made. Very satisfying! 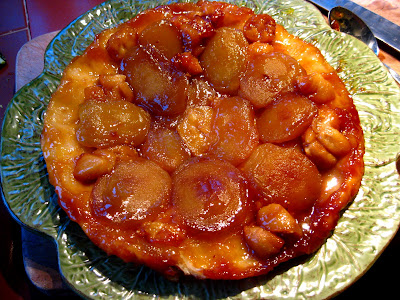 I've been to Auckland for my nephew's wedding (you can see a photo of the happy couple here).. One of the many nice things about it was the cake. In this picture it's minus its bottom layer - I couldn't get a good shot of it before. 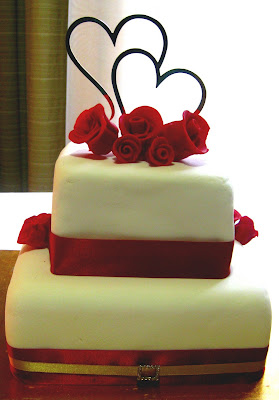 What I liked was the way it kept up the family tradition, only with a nice modern twist. Our mother made the cakes for my wedding (the first one!) and for my sister's wedding. But it was my brother-in-law who made the cake for his son's wedding. He's always made the family Christmas cake, too.
My nephew takes after his father - he's an excellent cook, and so is his wife. They go in for mini-Master Chef contests at their place. I couldn't help thinking how nice it would be if, in the years ahead, he made the cake for the wedding of his son, or daughter. 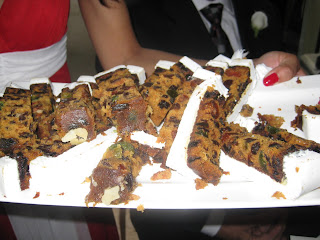