In the weekend I decided to make gingerbread. I think it's the first time I've made it since 2010. Unlike Christmas cake, it's really easy to make, and you can bake it as close to Christmas as you like.
This morning I took some as a small thank-you to shopkeepers in Marsden Village who have been so kind and helpful to me this year, and indeed every year since Harvey and I first moved here in 2007. There was still plenty left over for me, my son and our visitors.
Nine years ago, on 9 December 2010, I posted about making it for Harvey and gave the recipe, which came via our friend Beth Hill. 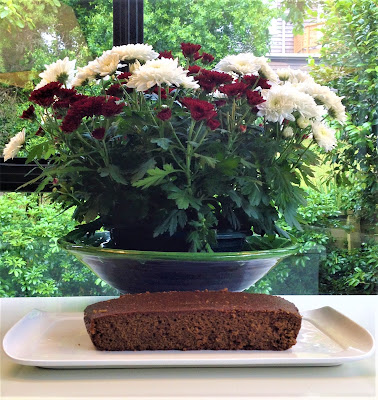 In The Colour of Food, I described Harvey finishing off my 2010 batch on what would later prove to be his last day at home:


By the Wednesday before Christmas we had had so many visitors that there wasn’t much gingerbread left in the tin. I cut it up carefully and put it out for that afternoon’s arrivals, then went out to finish the shopping, knowing was well looked after. When I came home there were three small pieces left – his visitors had enjoyed it, but he hadn’t had any. I sat down with him for a late cup of tea and he asked for a piece, then the second and the third. I watched him eat with astonished delight.

That evening he had a fall and was taken to hospital. At first he seemed to have recovered well, but by the next day he was much weaker. He died early in the morning of Saturday 25 December.

I'm really pleased I managed to make it again this year. 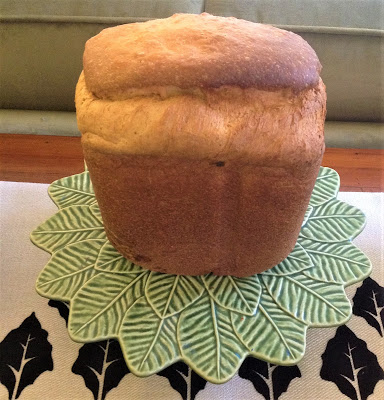 This rather magnificent brioche can be accurately described by the French term 'maison', meaning house-made. I did make it myself, in my house - but I did it with the help of my new breadmaker. I had a dear friend staying who grew up in a French-speaking country and is fully conversant with French food, so I decided I would make this on Friday night for our Saturday breakfast.
Honestly, it's magic. Get out the recipe book that came with the machine, fetch the bread pan from the laundry where the breadmaker lives (it's far too big for my kitchen), and put in the ingredients in the given order. Set the machine going and have an extra 70 g of chilled bits of butter ready to add after 55 minutes. Then leave it to do its thing for another two and a half hours. Et voila!
We ate it very lightly toasted with yet more butter and good jam. In a couple of days the loaf looked like this: 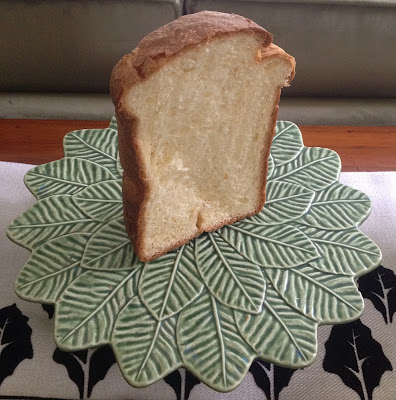 I do of course also make ordinary loaves for everyday use - mostly half wholemeal and half white high grade flour - and very good they are too. No weird ingredients: just yeast, flour, salt, milk powder, butter, treacle, water. It takes 5 hours to bake, but that's easily managed.
I was spurred into doing this because a few weeks ago, I downloaded an e-book (from our wonderful Wellington City Libraries): The Way We Eat Now: How the Food Revolution Has Transformed Our Lives, Our Bodies and Our World, by UK writer Bee Wilson (Fourth Estate, 2019). It was recommended to me by Asher Regan, whom I met at a food writers' lunch.
It's one of the best books I've read about, well, the way we eat now - not just in 'Anglo' countries, but around a broad sweep of the world. There's a useful review of it here. It's refreshingly sensible and pragmatic, but at the same time makes it plain that the way we eat now is, in far too many cases, killing us.
One of the topics Wilson discusses at some length is bread - particularly how its traditional way of making has been speeded up, using various previously unnecessary ingredients, to suit commercial food production and supermarket selling.
I love good bread, and so does my son. It was one of the best things about the food we ate during our sojourn in Albania: huge dark rye loaves with a slightly sourdough flavour. But here, properly made 'artisan' loaves have to be sought out and are too expensive for everyday use. Vogel's is the best the supermarket has to offer, but at full price it's around $7 a small loaf. And I am not adept or even strong enough to make bread from scratch by hand, as some of my admirable friends do.
But I do now have some time to spare, So I decided that a good way to improve our everyday food would be to invest once again in a breadmaker, and produce our own. I'm under no silly illusions that this is a mass solution of any kind - obviously that's rubbish, as is exhorting everyone to grow their own veges. And I don't know how long I'll be able to keep it going, But for now I feel very lucky that it's working so well for us.