The last of the cherries

Well, the last for me this year - they're still in the shops, but I won't buy any more because I'm off to China soon, leaving a friend to house-sit. I'm trying to work out how I can post from there, but it may not work...
When one of my visiting English friends admitted that he loved dessert, I looked at my half-full box of cherries and thought, "clafoutis". Clafoutis is basically a thick pancake-like batter poured over cherries and baked in the oven. You can use other fruit, but technically it's then not a clafoutis, but a flaugnarde (another lovely word).
Clafoutis comes from clafir, an Occitan word meaning "to fill". Occitan isn't a French dialect, it's a very old separate Romance language which was once spoken and written across a large area, ranging from northern Spain up into southern France, centred on the Limousin, and part of Italy. Medieval troubadours sang in Occitan. But it was progressively suppressed by French rulers intent on imposing one language and identity. Today it's being enthusiastically revived, though it still has no official status in France (unlike Spain and Italy).
I haven't made one of these remarkably easy desserts for a long time, but I was pretty sure it was a simple recipe. And it is - but Mastering the Art of French Cooking, as usual, explains exactly how to get the best results.
Opinions differ about whether you should take out the cherry stones or pits. I think the clafoutis looks much better if you don't (besides being easier). Apparently the traditional version does leave the pits in, because they're said to release a wonderful flavour when cooked, whereas taking the pits out makes the taste milder.

icing sugar n a shaker for topping
a baking dish (metal or ceramic) which can go from the hob to the oven.

Place all the ingredients except the cherries in a blender in the order listed. Cover and blend at top speed for 1 minute. (If you don't have a blender, work the eggs into the flour with a wooden spoon, then gradually beat in the liquids and other ingredients, and strain the batter through a sieve.)

Pour a 1/2 cm layer of batter into the dish. Set over a moderate heat for a minute or two until a film of batter has set in the bottom. Remove from heat and spread the cherries evenly over the thin layer of batter (which will hold them in place and stop them rolling around). Sprinkle over the second 1/3 cup of sugar.

Pour over the rest of the batter. Place in the middle of preheated oven and bake for about an hour (mine took a little less than this, about 45 minutes). The clafoutis is done when it has puffed and browned a little, and a thin knife or skewer stuck in the middle comes out clean.

It can be served hot or warm (I think it's better warm). It will sink down slightly as it cools. Shake icing sugar thinly over it just before serving (I forgot the icing sugar, but I'm not convinced it's absolutely necessary).We had a little creamy plain yoghurt with ours, or you can have cream, or just eat it on its own. This recipe is supposed to serve 6-8, but I'm afraid ours just nicely served four - tant pis. 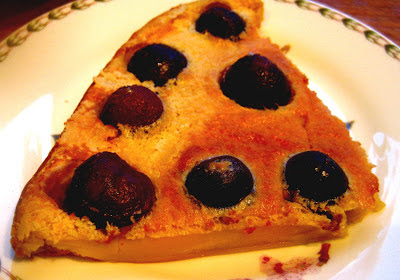 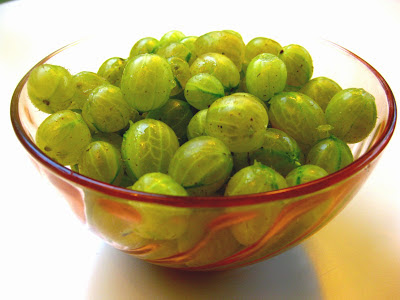 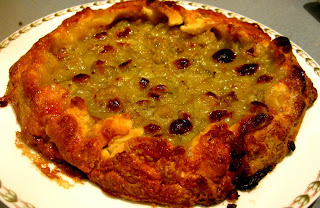 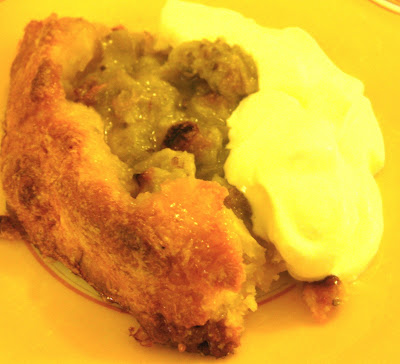 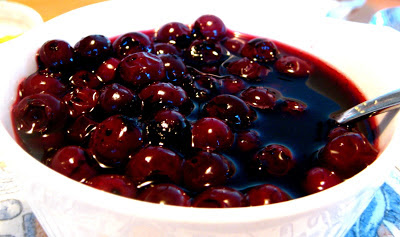 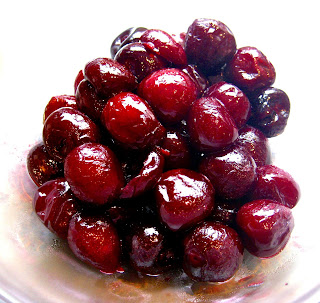 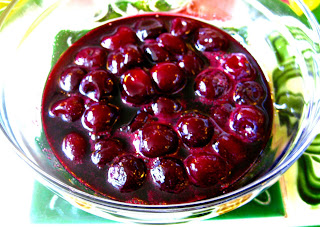 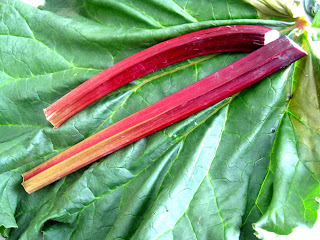 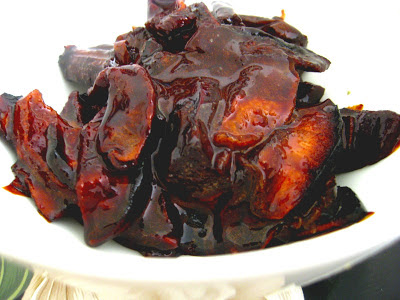 I was going to throw it away, but first I broke off a bit and tasted it. Amazing - a sort of chewy fruit toffee. So I added a bit of water to soften it and tried a lump next morning with my muesli, milk and yoghurt. It was sensational, still slightly sharp but with a rich caramel flavour. I'm going to do it again, only better controlled this time so it doesn't look quite so much like a burnt offering. There are six more stalks waiting in the fridge...
Posted by AnneE at 3:05 PM 2 comments: