A couple of weeks ago, I was looking for a new idea for a slow-cooked beef casserole.  I had some cross-cut blade beef in the freezer, but I didn't want to make the basic recipe, nor did I want anything using tomato, such as my go-to Italian classic, stufato alla romana - I use canned tomatoes a lot, but this time I fancied something different.
So I turned first to Lois Daish.  There was nothing quite right in Dinner at Home, so I tried A Good Year - I remember going to the launch with Harvey in 2005.  Sure enough, I found exactly what I was after: Slow-cooked Beef, Carrots, Garlic and Lemon. It sounded both easy and different. The other thing I really liked was that it didn't use any unusual ingredients - I had everything I needed to hand. Although Lois wrote it for slow cooking in the oven at a low temperature, I thought it would work just as well in a slow cooker, and it did.
I've reproduced Lois's recipe here as she wrote it, with my added notes for using a slow cooker instead. She always seems to include useful instructions that teach me something, such as "Brown the meat on at least two sides" - in other words, you don't need to ensure every side of each chunk is browned. And her introduction to the book's section on "Slow Beef" explains why it's important to allow a stew to cool down for a few minutes before you serve it:


"This is because as the stew cools the pieces of meat, which always dry out as they cook, start to soak up the gravy (something like a sponge that has been squeezed dry and then put back in the water). This explains why a second helping of stew often seems more succulent than the first. To make up for the heat lost while the meat relaxes, always serve stews on very hot plates."

Her dish was such a success that I made it again the next week for my neighbour Frances.  The fresh, lemony flavour is unusual with beef, but it worked extremely well. I served it with broccoli and mashed potato one week, and a green salad and baked potato the next.

Carefully trim all fat and silverskin from the meat, but leave in place any seams of gristle, which will soften during cooking. Pat the meat dry with paper towels and cut into large chunks.
Peel carrots and cut into chunks of similar size to the pieces of meat.

Put a little oil into a frying pan [preferably cast iron rather than non-stick] and heat until very hot. Place the meat in the pan, being careful not to crowd the pieces - you'll probably need to brown it in 2 batches. Brown the meat on at least two sides and season with salt and pepper.

While the meat is browning [or later if, like me, you're not good at managing tow things cooking at once] chose an enamelled cast iron casserole dish [or deep non-stick pan] and add the butter, diced onion and garlic. Stir over a moderate heat until the onion is translucent, then add the herbs and flour. Stir until the flour starts to colour, then add the stock, lemon zest and juice. Add the browned meat and carrots.

Add a little water to the frying pan [the one you cooked the meat in], return it to the heat and scrape up any juices in the pan. Add this to the casserole. The liquid should almost cover the meat and carrots, so add a little more water if needed. [You need a little less water for the slow cooker.] Bring to the boil, then cover and put in a low oven, about 140C, for about 2 hours until very tender.
[For the slow cooker: after you bring it to the boil, transfer it carefully to the slow cooker. Cook for about 4 hours until very tender.]

Dinner-time light is always a problem, so the photo isn't great (the mash was Agria, but it wasn't that yellow!). But I hope it gives you the general idea. 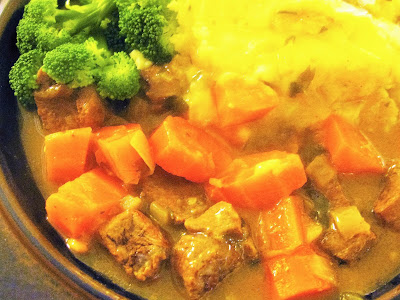