Nine of us for early dinner this year, and a new approach (for me): a move away from Harvey's beloved roast dinner, and I didn't make a Christmas pudding.  Instead we had a half-ham from Cameron Harrison in Kelburn (their ham won best in New Zealand this year).
My smartest move was at the butcher's the day before - they weren't busy when I got there, so I asked them to skin and score it for me. What would have taken me half an hour and lots of swearing took them two minutes.  I took lots of advice about glazing and warming the ham (it's already cooked, of course), and settled for a simple but delicious glaze of quince jelly (made by friends) with a dash of Dijon mustard. Not very good photos though - blame it on the champagne... 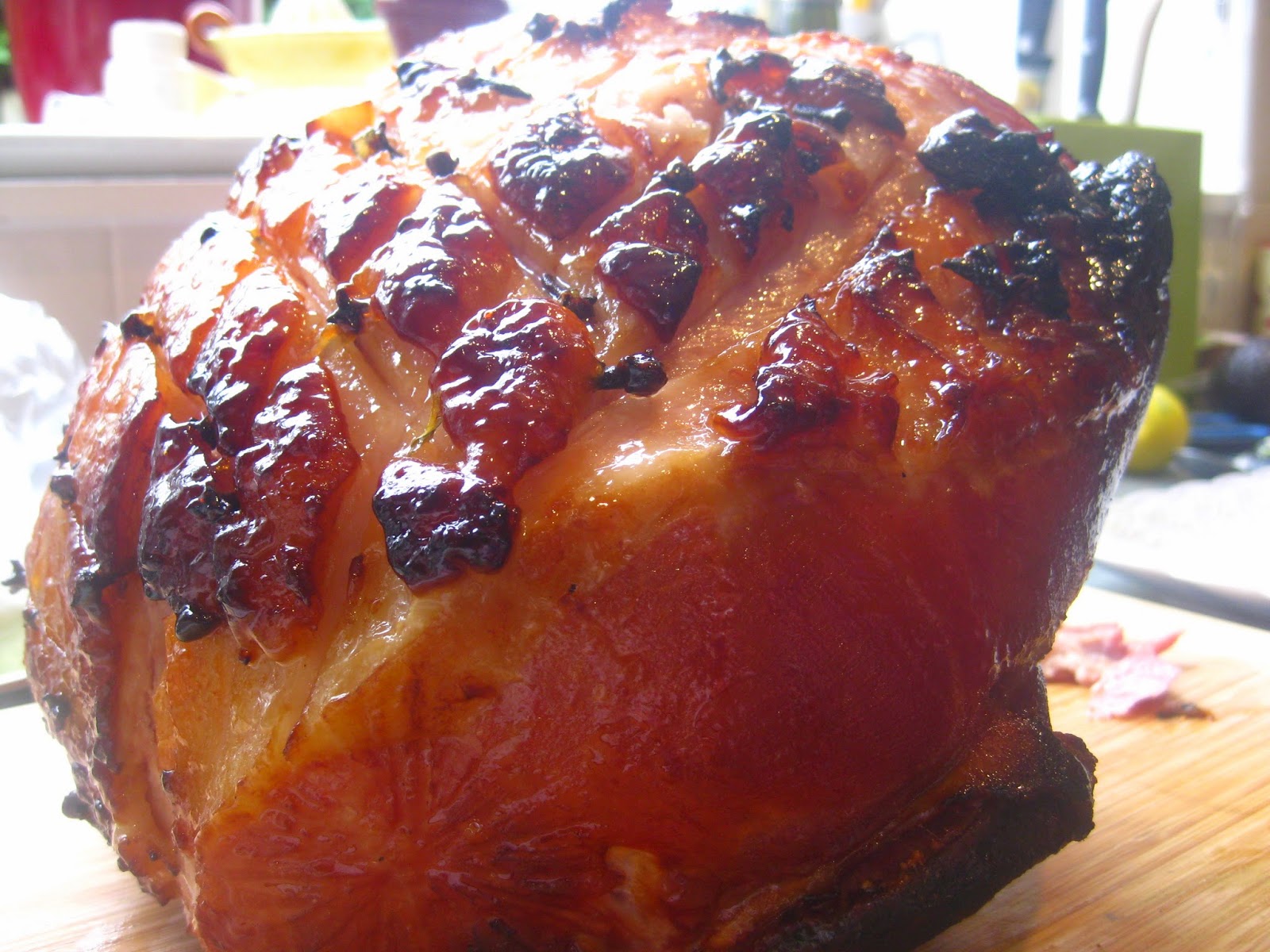 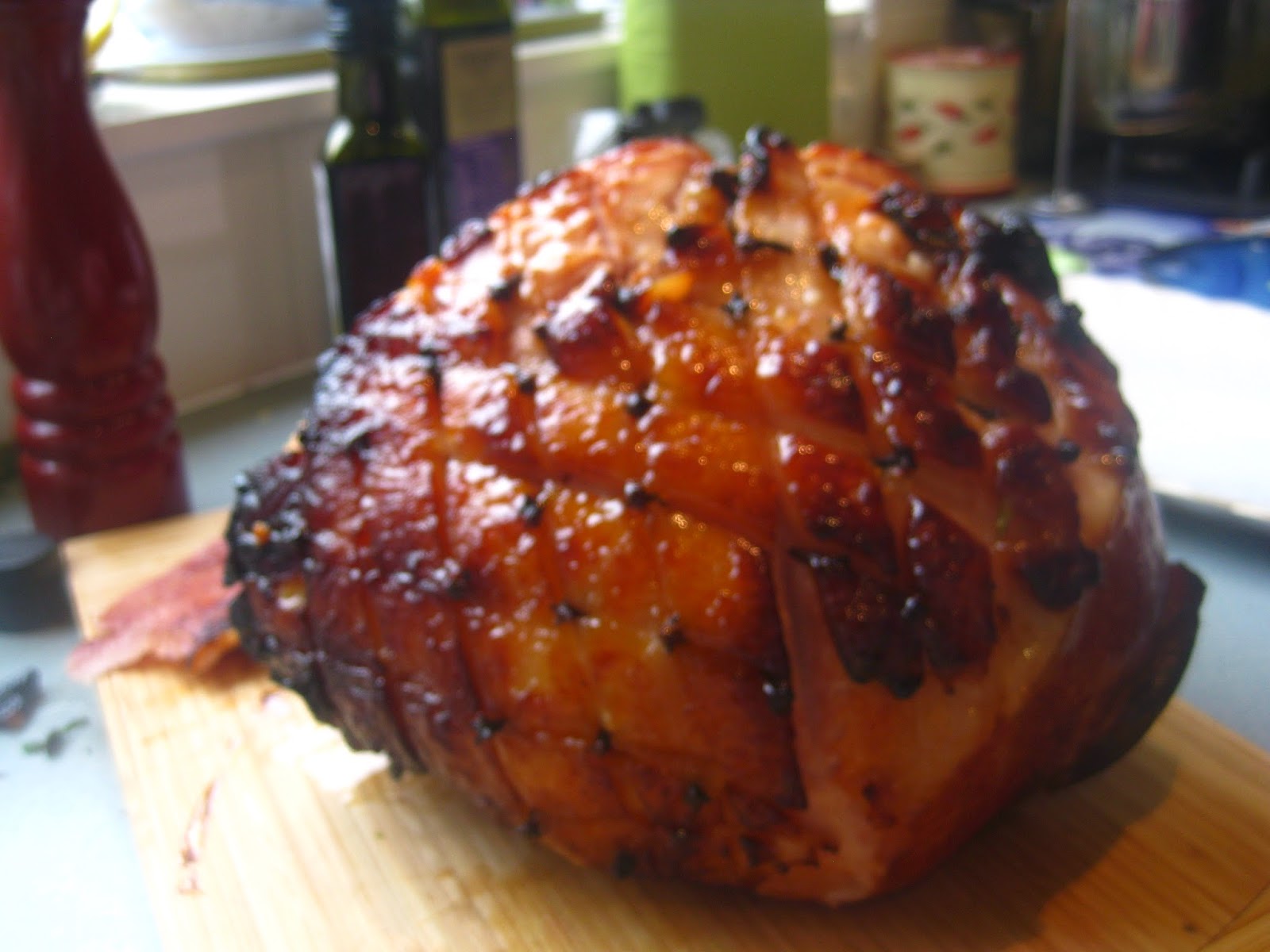 With it there were boiled Jersey Benne potatoes, roast kumara with chili dressing, and a trio of vegetable salads, which were partly trad and partly invented: a green one, a ruby one, and a red, orange and yellow one.

The green one had to be made mostly on the day: ribboned courgettes and spring onions (from the Hill St market) with chunks of avocado, lightly cooked skinny asparagus, finely chopped mint, and a sharp lemon and avocado oil dressing. The courgettes and mint went into the dressing a couple of hours before serving, and the rest was added just before we sat down.  The pretty lettuce serving as a frilly surround is my Drunken Woman Fringed Head. 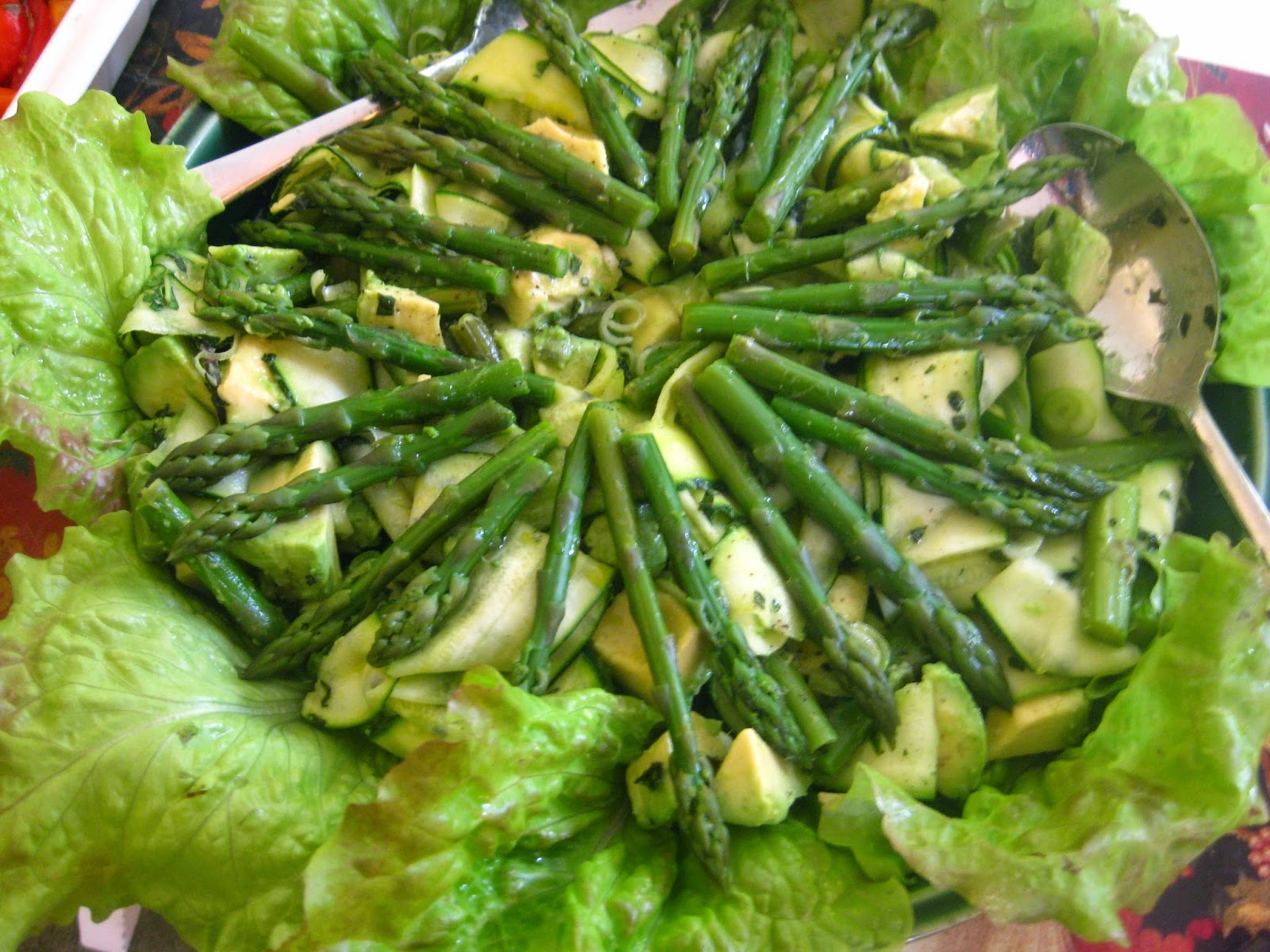 For the ruby one, inspired by my neighbour, I roasted very small whole tinned beetroot, drained and cut in half if they were a bit bigger, with lemon zest, finely chopped garlic, brown sugar and balsamic vinegar, first wrapping them in foil lined with baking paper, and cooking for 30-40 minutes at 180C. (Of course you could make this with fresh beetroot, but it would take much longer and it's hard to get very small ones.  Roasting the tinned ones this way changes their flavour.)
On the day, I combined finely chopped red onion (soaked briefly in salted warm water to make it milder) with finely sliced radishes. I added the beetroot just before serving, with a dressing made of good olive oil and a superb blackcurrant and balsamic reduction, sent for Christmas by my sister. Then I mixed in pomegranate seeds - such beautiful, ancient things, and I hadn't used them since I lived in Albania. I topped it off with a scattering of borage flowers offered by two of my guests. 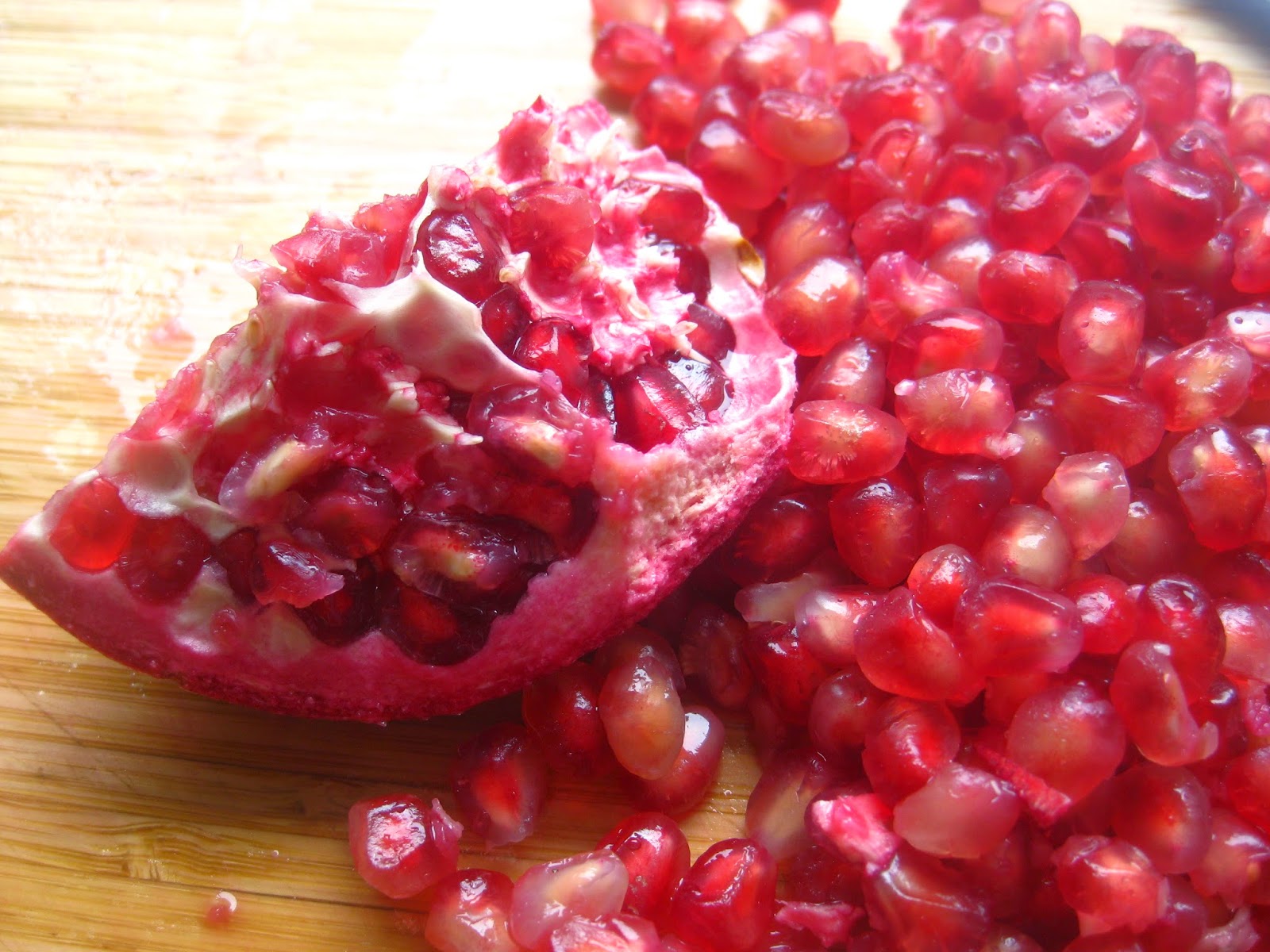 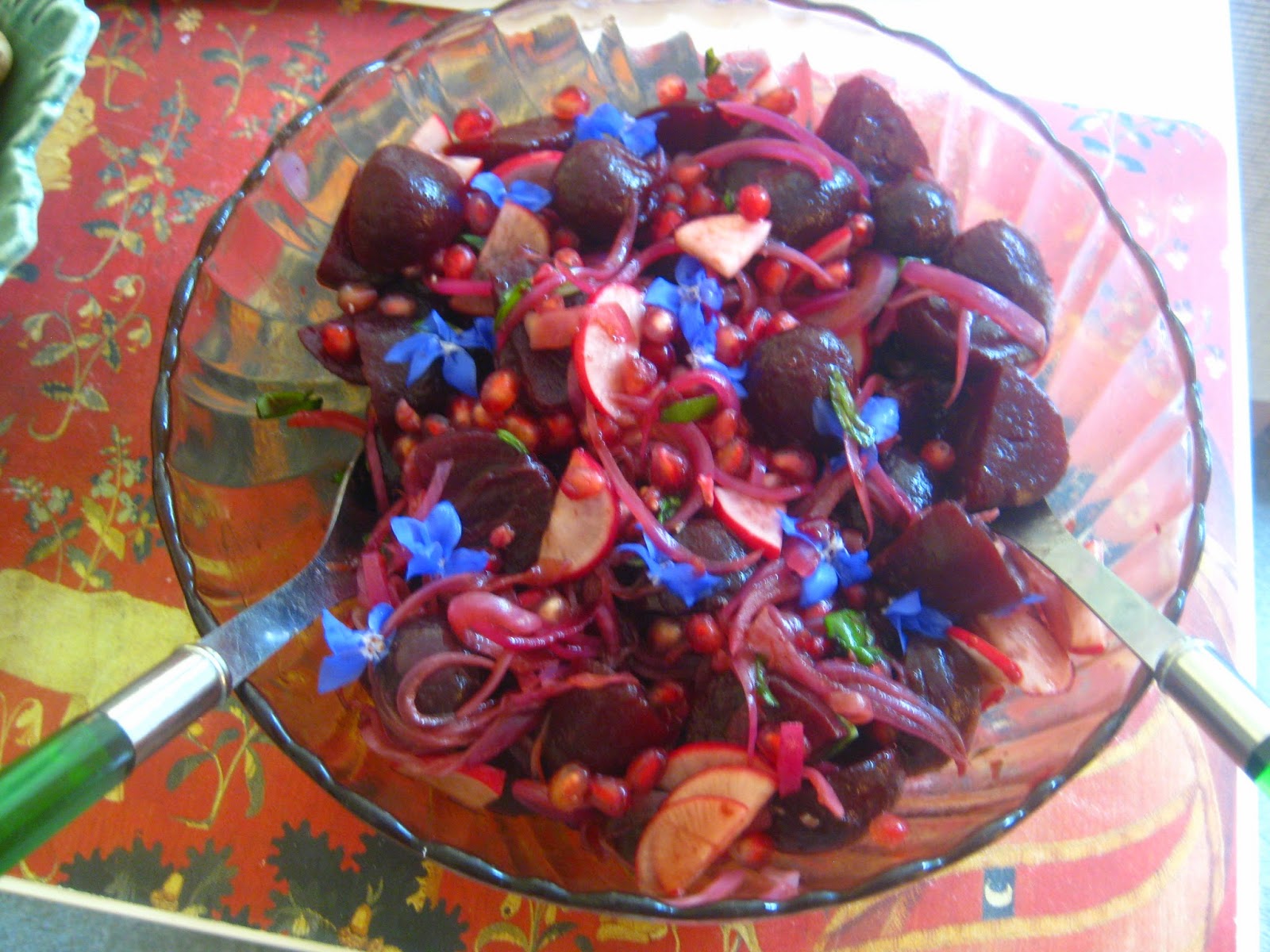 The last salad was based on the recipe for "Insalata di peperoni arrostiti" in Antonio Carluccio's Invitation to Italian Cooking. He says it "improves with standing, and is excellent eaten the next day", so I could make it on the 24th.

Roasted pepper salad
4 fleshy yellow and red peppers (I added an orange one too, and slightly increased the dressing quantities)

Halve or third the peppers, removing the seeds and white inside bits,  and grill them skin side up, spread out on a grill pan, or skin side down on a barbecue if you're having one, until the skins go wrinkly and blacken in places.  (You can also blister them individually over a gas flame, but this mass cooking is much faster - only they do need careful checking to make sure they aren't getting too charred, and you'll need to move them around a bit to get even coverage.)

Put the peppers into a plaastic bag or bags, twist the neck, and leave till cool. Then peel or scrape off the skins with a sharp knife. Slice the peppers into thin strips (no more than 1cm wide).

Place the pepper strips in a serving dish and toss with the garlic. Dress with the oil, parsley and salt.
Leave until needed (preferably overnight). Check seasoning before serving. 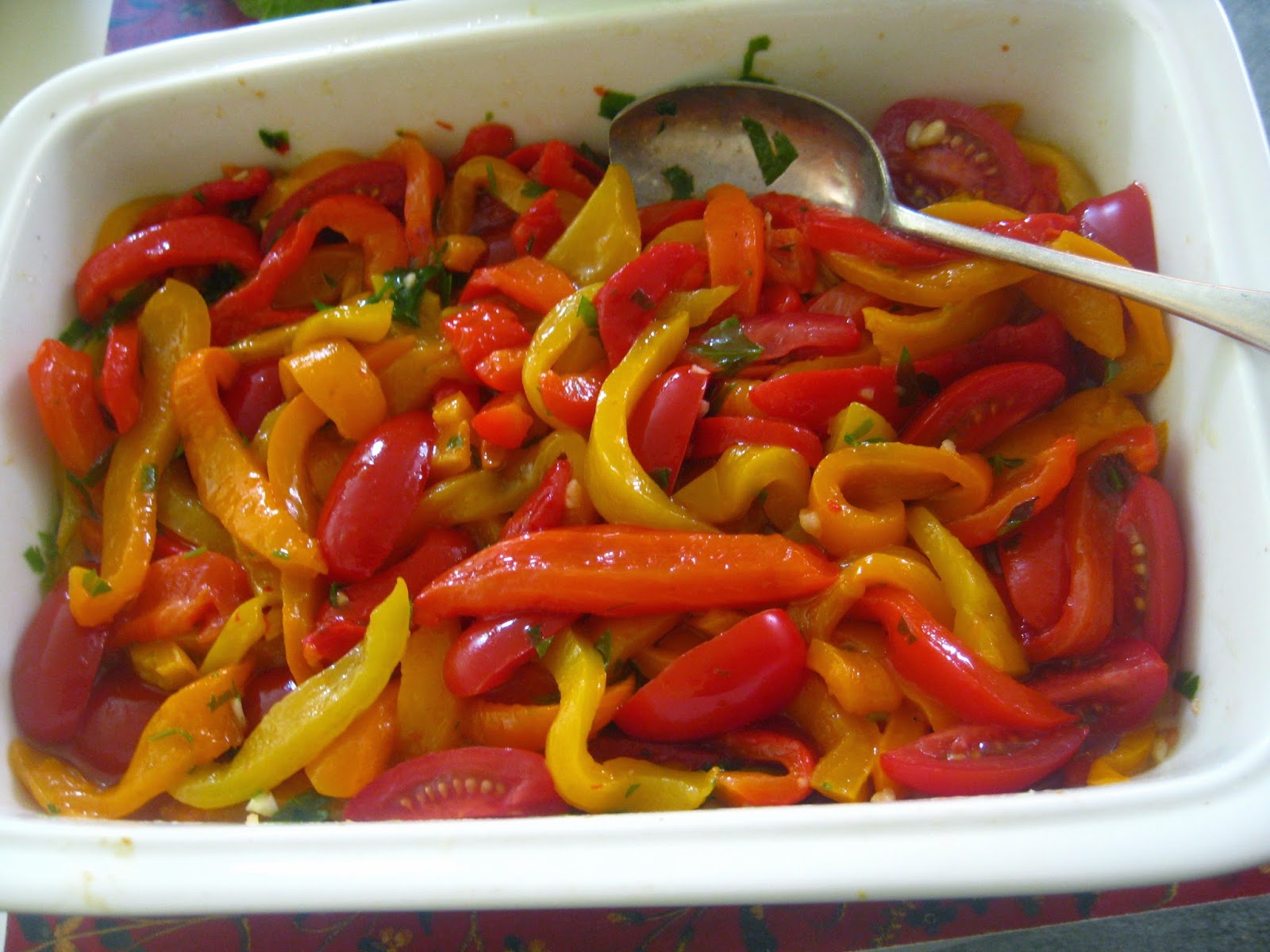 I wanted to get tomatoes in somewhere, so I added halved baby oval tomatoes at the last minute.
Two of these salads, and the kumara, were slightly sweet or sweet/sour, and the green one had lovely fresh flavours. They were all very good with the ham.
The other four courses - starters, cheese, dessert, afters - were supplied by my guests. The black forest trifle had to have its photo taken before the spoons went in. 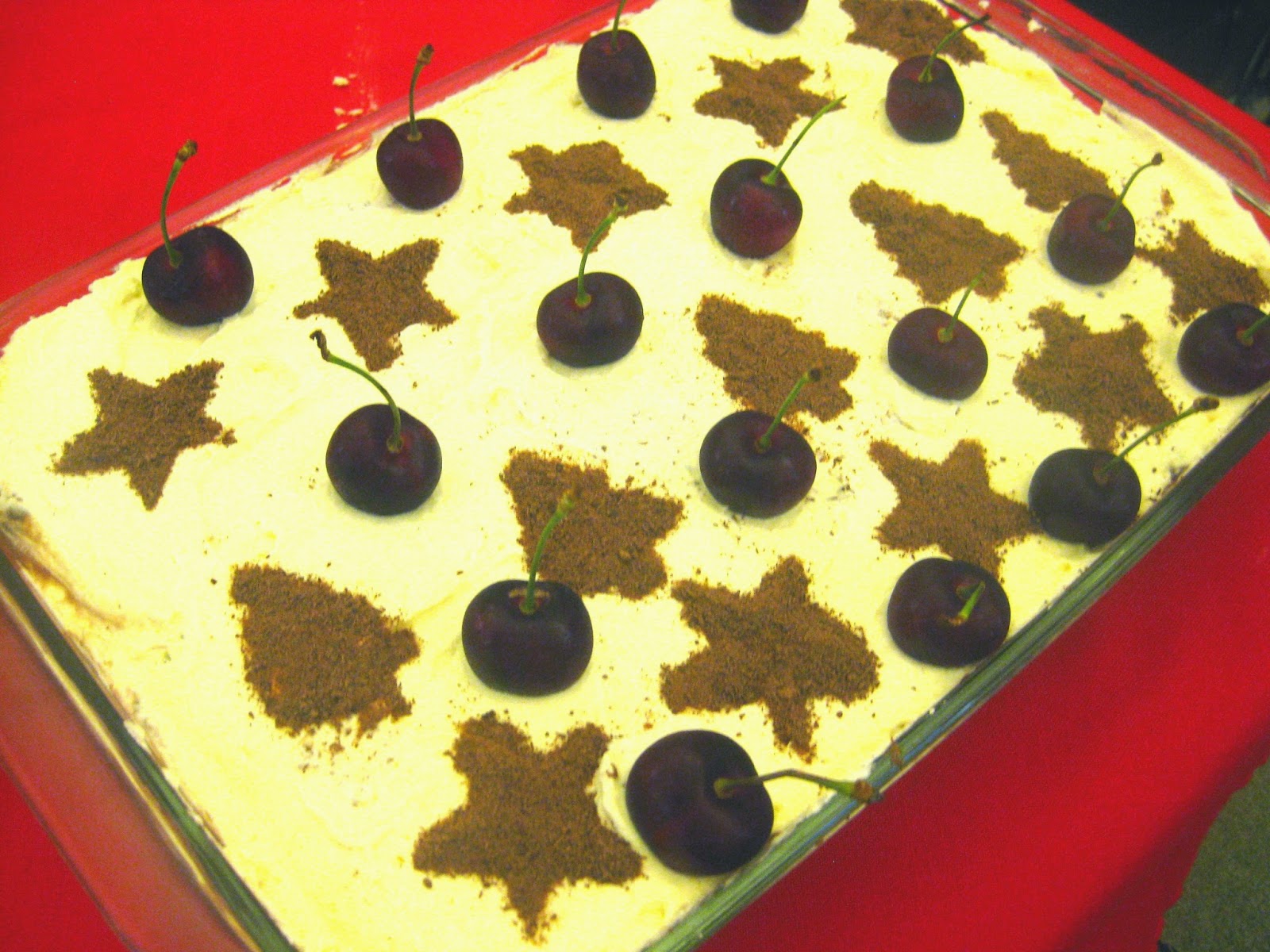 Lois Daish once wrote in a Listener column that when she was running her Brooklyn restaurant, a dessert called a tart was chosen much more often than an identical one called a pie. Somehow pie sounds stodgier, whereas tart sounds lighter and, well, more tart - especially in the case of fruit tarts.
Needing to take a dessert for a group lunch with our beloved friends visiting from Arizona (that's some of us in the photo), I thought a lemon tart would be a good choice, especially as I now have MY OWN LEMONS. 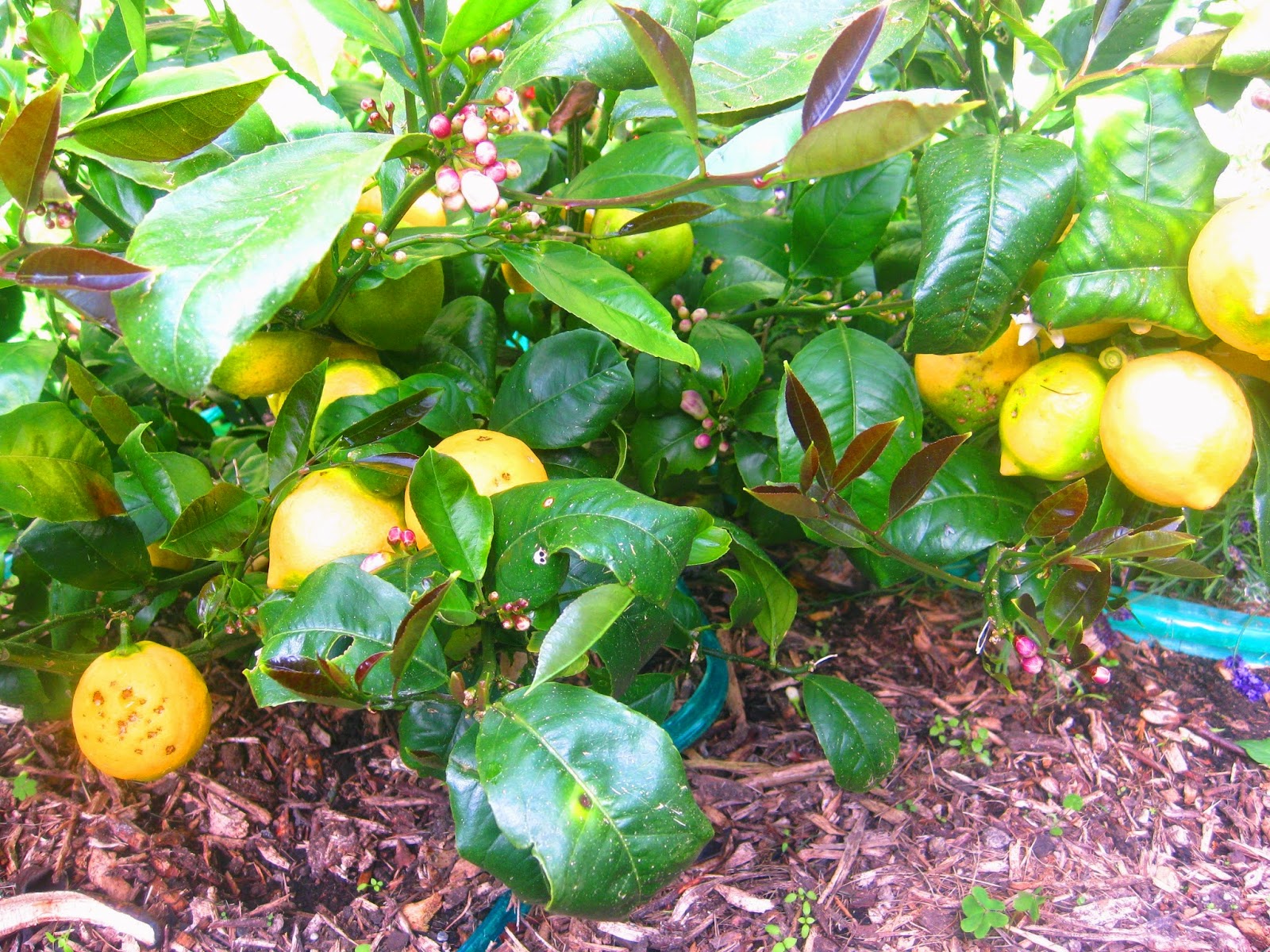 So I turned to Julia Child. Surprisingly, she doesn't give a recipe for the classic kind of French lemon tart, with its smooth creamy filling. (I have another recipe by Joel Robuchon which produces a magnificent result, but it is very time-consuming.) Instead she offers a somewhat more substantial tart made with lemon and ground almonds, which looks remarkably easy - and it is.
I've changed the measures to metric where necessary - it's so annoying that the new edition of her book didn't include these as well as the old ones! I've broken up the recipe the way she does, with each set of ingredients, then the instructions for them (though hers sit alongside each other). I've always found this a really helpful way to read a recipe - but you do need to go through all the ingredients first to make sure you've got them. And for the very first time, I found a mistake in Julia's recipe - see below. 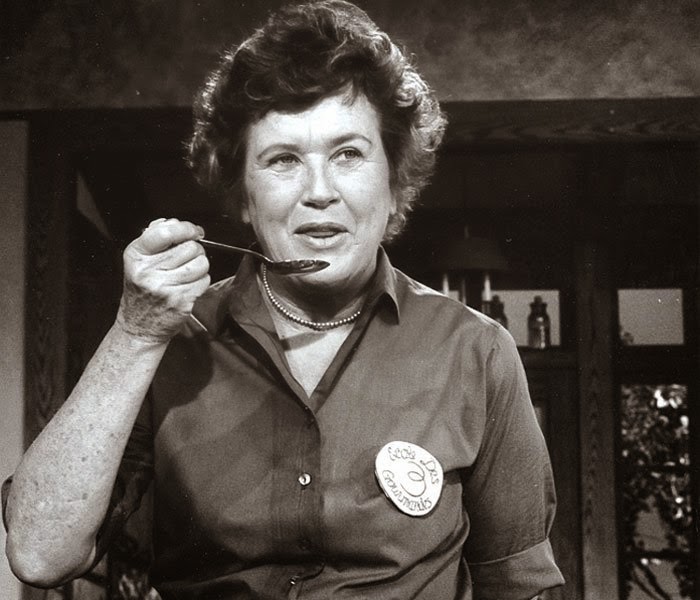 A precooked sweet pastry shell, made in a tin 23cm across and about 2cm deep
(If I have plenty of time I make the pastry myself, if not I use bought sweet pastry. Don't let it get too brown when you precook it, as it has to cook again with the filling.)

3 lemons (She never says what size, so I assume medium - that seems to work)
a lemon zester which produces long thin strips, rather than finely grated zest

Take off the yellow skins of the lemons to produce strips. Simmer 10-12 mins in water and drain thoroughly.

(She doesn't say so, but it pays at this point to halve the skinned lemons, put them in a microwave proof bowl and microwave on high for 30 seconds. Squeeze the juice from the lemons, straining it into a small bowl, and set aside. Briefly microwaving lemons makes it far easier to extract the maximum juice from them.)

Boil the sugar and water to the thread stage (110C). Add the drained lemon peel and vanilla and let it stand for 30 minutes.
(I don't have a candy thermometer and have never quite known how to get to the thread stage. So I just boiled it for a few minutes, stirring, until it formed a syrup, then took it off the heat and put in the lemon skin and vanilla. This seems to work perfectly well.)

Beat the eggs and sugar with an electric beater for 4-5 minutes until mixture is thick, pale yellow, and falls back on itself forming a slowly dissolving ribbon. (Isn't that beautiful?)

1 more large or 2 smaller lemon/s
(I have added this as a separate stage)
Zest the skin of the lemon/s, this time producing finely grated rind, and put it in a small bowl.

1 and 1/4 cups (113 grams) ground almonds
This is where the rare mistake came in. Julia says "1/4 cup (4 ounces)". I knew that 4 ounces was much more than 1/4 cup, and assumed the actual measurement was the correct one. I weighed out the ground almonds, then put this into cups. Neatly pushed down slightly, it comes to 1 and 1/4 cups, so that must be what she meant here. But best to weigh it - it needn't be exactly 113 grams.
1/4 tsp almond extract

Beat the almonds, almond extract, finely zested lemon rind, and half the lemon juice from the first 3 lemons into the egg and sugar mixture. Taste it and add a little more juice if you want it slightly sharper. (That's me, not Julia, but it works.)

Pour this lemon and almond cream into the cooked pastry shell. Bake in the middle of the preheated oven for about 25 minutes (it may take a little longer, but check it carefully.) Tart is done when cream has puffed, browned very lightly, and a thin skewer poked into the middle comes out clean. Slide tart onto large rack to cool. (Or if it's still in the tin, as mine was, stand the tin on a rack.)

Drain the strips of lemon peel from the sugar syrup and strew them over the tart.
(I love that word "strew" - it sounds so carefree - but usually it means "very carefully distribute so they'll be more or less evenly spread.")

Julia then says to "boil the syrup down until it is a glaze (last drops are sticky when they fall from a spoon) and spoon a thin coating over the top of the tart." But I thought this would make it too sweet, so instead I kept the syrup to use with other fruit later. 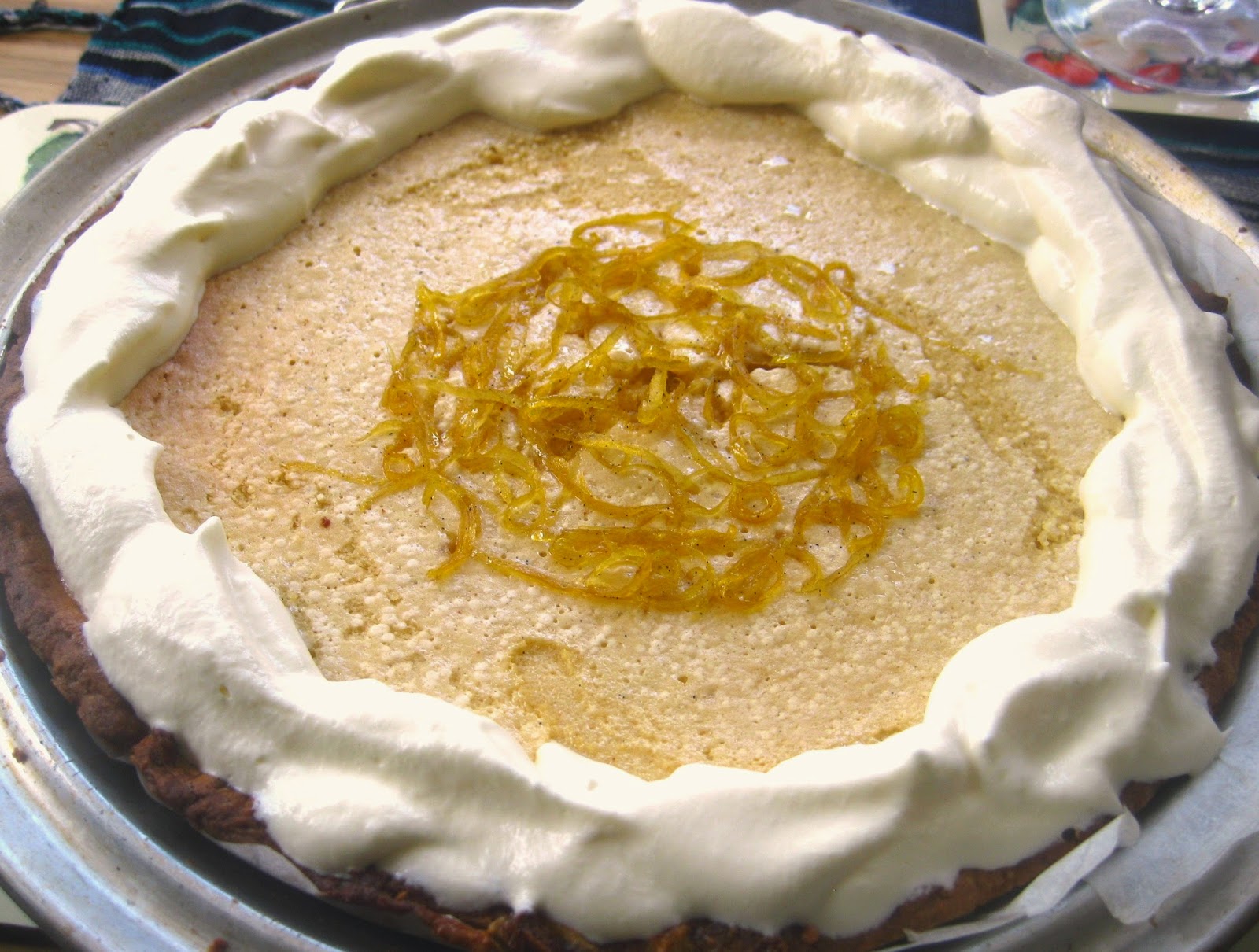 As I had to transport the tart, I left the shell in the tin I had baked it in, filled it and baked it again, then took the whole thing with me. I did try to take it out of the tin, but stopped because this was making the filling shrink back a bit from the sides, which were in any case a little too brown. So I took care of all that by putting a ring of whipped cream round the top once I got there - it needs whipped cream with it anyway. And I didn't use as much lemon rind as she specifies, since the lemons had marked skins. I cunningly used the strips I had to hide the cracked bit in the middle, caused by baking it for a little too long and poking it too enthusiastically to test it.
But apart from these real-life imperfections, it tasted really, really good, and I think it was better because it was still a little warm when we ate it - Julia does say you can serve it warm rather than cold, and I always prefer that with any kind of pastry. I'll be making this again.