For my birthday lunch, deferred until June (I like to spread it out), Ali served me an absolutely perfect leek and blue cheese tart. Unfortunately I didn't take a photo, but I was determined to have a go myself, so she gave me the recipe.
Today I managed to do it. Not quite as perfectly trimmed around the edges as hers (she gives clever instructions for dong this AFTER the case is blind-baked, but I carelessly missed that bit), and it could perhaps have done with slightly longer cooking  to set the filling a fraction more - but my oven tends to run hotter than hers, so I had to take it out slightly early to stop it going too brown on top. Otherwise - well, it really was pretty good.

First make the pastry: Put the flour, butter and salt in a food processor and pulse until the mixture looks like breadcrumbs. Add the egg yolk, then pour in the milk in a gradual stream. Watch carefully and stop adding the milk as soon as the dough starts to come together.
Turn out and knead lightly a couple of times, then wrap in cling film. Chill for 30 minutes. Take out pastry and leave until you can roll it easily (but it's still firm). Line the pastry case with a big enough piece of baking paper to have it sticking out enough to lift it out easily later. On a lightly floured surface, roll the pastry out quite thinly and use to line a 25cm loose-based tart tin, letting the excess pastry hang over the edges.Chill for 30 minutes.

Prepare the filling: Put the leeks into a saucepan with 100ml water, the butter and some salt and pepper. Bring to a low simmer, then cover and cook gently, stirring once or twice, for about 10 minutes, until just tender. Drain well, reserving the cooking liquor. 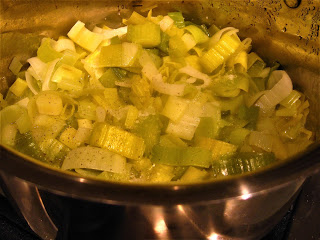 Fill tart case with baking beans and place in the centre of the oven. Bake blind for 20 minutes. Take the tart out of the oven, remove the paper and beans, lightly prick the base all over with a fork and return to the oven for 5 minutes, until the base is dry but not too coloured. (Mine looked a bit too pale, so I shifted the setting to Fan Bake for this stage and for the rest of the cooking.) Carefully trim off the excess pastry with a small, sharp knife.
Turn the oven temperature up to 180°C (170°C may be better if you are using Fan Bake).
Put the eggs and egg yolks, cream and leek liquor in a bowl and beat until smooth. Season to taste.

Spread the well-drained cooked leeks in the tart case and cover with the grated/crumbled cheese.
Pour the egg mixture over the leeks and cheese. Put the tart back into the oven and bake for about 30 minutes. The custard should be just set when you gently shake the tin.

Ali and I both use Mary Berry's trick to get the outer rim of the tart case off easily.
Let the tart cool a little. Rest the base on a flat-bottomed upside-down bowl or small saucepan, which needs to be a little smaller than the base. 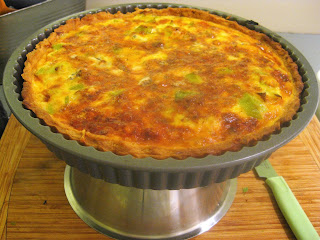 Use a sharp knife to gently free any bits of the edge that are sticking to the rim. Then ease the rim down to the bench, leaving the tart sitting neatly on its base. 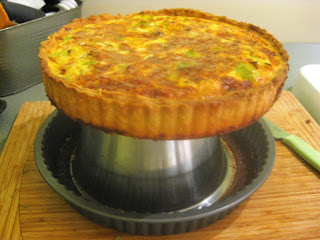 Serve warm or cool (but not chilled).  All you need with this is a simple salad, but you can add crusty bread and butter if you're really hungry.

Between us my son and I ate half tonight, leaving half for tomorrow - brilliant. 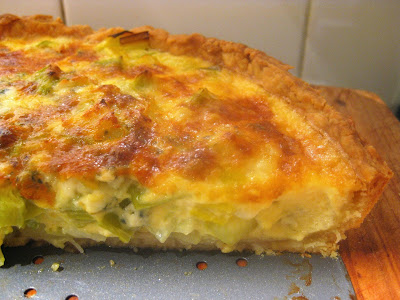