Before the onslaught of Christmas richness and excess, here's something light and distinctly un-excessive.
I don't know whether it's my inherent parsimony or my love of making something delicious out of nothing, but I really enjoy finding a good use for a clutch of leftovers. Last week I had:
- crusts cut from a plate of little salmon sandwiches (with tiny bits of salmon and butter clinging to them), popped into the fridge in case they came in handy
- about half a cup of leftover salmon sandwich filling (tinned salmon mashed with lemon, vinegar and a scrap of creamy salad dressing)
- a third of a loaf of dry but quite good white bread
- a couple of lumps of rather dry cheddar

I considered these remnants thoughtfully, and the idea of a savoury bread and butter pudding swam into view.  So I looked this phrase up on Google, and straight away I found a very appealing recipe by Ruth Pretty.
(I do prefer to use NZ or, at a pinch, Australian internet recipes - the ingredients and measurements are usually familiar, as are the hobs and ovens, and they always seem to work out well).
Her recipe did not, of course, have any leftover salmon in it. But it did have cheese, and I thought it could easily be adapted to include a bit of salmon, not to mention crumbs made from crusts.
But it called for six eggs and looked quite large, so I halved it. And because it was so much smaller, I thought it could probably stand for four hours in advance, rather than the minimum of six she specified. Anyway, I only had four hours to spare before I wanted to bake and eat it, so that would have to do.

Butter to grease dish
3 large eggs
1/2 cup milk
or
1/4 cup milk and 1/4 cup cream
a dash of chili flakes
1/2 cup fine dry breadcrumbs (I made these from the nicely dry sandwich crusts)
a good-sized piece of stale white bread (not sliced), crusts removed
(weighing about 100g without the crusts)
1/2 to 3/4 cup grated cheddar
1/2 cup mashed tinned salmon, seasoned to taste (if liked) with lemon and/or vinegar and/or mayonnaise

NB: Mix and stand for four hours before cooking

- Grease a round ceramic or glass baking dish with butter.
· Put eggs, milk, cream if using, and chili flakes into a bowl and whisk to combine.
- Cut bread into 2.5 cm cubes.
- Sprinkle half the breadcrumbs into the base of the dish. Cover with 1/3 of the grated cheese.
- Layer half the cubes of bread on top, cover with the salmon, then sprinkle over another 1/3 of the cheese.
- Cover with remaining cubes of bread.
- Pour egg mixture evenly over bread layers in dish. Season well.
- Sprinkle remaining breadcrumbs on top. Cover with remaining 1/3 of cheese.
- Leave dish to stand in fridge for four hours. 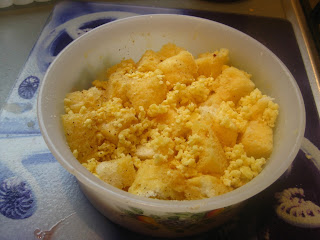 - Preheat oven to 180C. Bake bread pudding for 25-30 minutes until puffed and golden.
(Ruth's recipe said 20-25 minutes, but even though my pudding was half the size, I preferred to cook it for a little longer so that it was nicely set,but not dried out. The dampish salmon probably meant it needed to cook a bit longer than her recipe without that.) 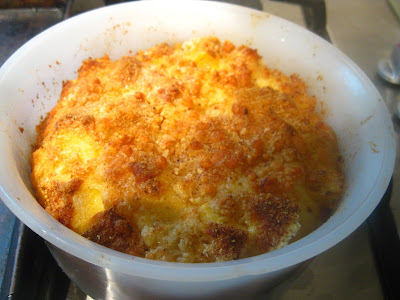 This turned out remarkably well - light, tasty and delicious. It serves two generously, or three with lots of veges and/or salad. I had it with skinny asparagus - perfect.