Of the earth, earthy - lentil and mushroom soup

In 2006, straight after I finished my PhD, I took off for France with a friend. Harvey had already decided he wouldn't travel to Europe again, but it was a book he bought that inspired me to go: Stephanie Alexander's magnificent Cooking and Travelling in South-West France. 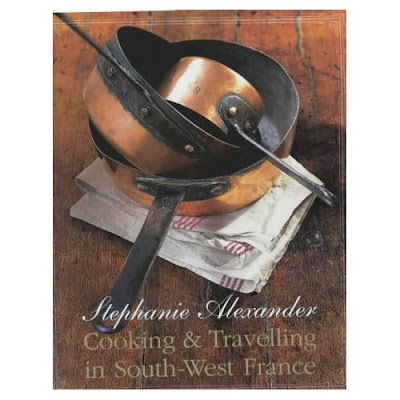 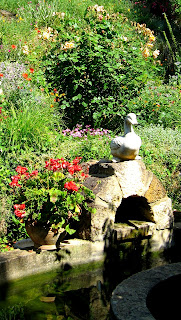 We stayed at a farm estate five minutes outside Sarlat-le Caneda, about four hours from Bordeaux. Every morning Madame would tell us what her son was cooking that night, so we could decide if we would be in for dinner. Duck was often the centrepiece. Everything was "bio" (organic) - not because it was "green", she told us, but because it just tasted better. Over our seven-night stay we managed to eat there five times, and it was consistently the best food experience I've ever had.
It was early summer, so we didn't have anything like this rich dark soup, but in winter I'm sure something very like it would have appeared. Stephanie Alexander says that although it's her own invention, "I feel sure it would be welcomed by any resident of the south-west".
Lentil and mushroom soup (serves 6-8)

1 large potato, peeled and diced
* Rinse lentils under cold water and drain. Put in a large saucepan and add 1.5 litres (6 cups) of water. Simmer gently for 20-30 minutes until tender.
* Make a fricassee: Chop mushrooms (including stems) into small pieces. Heat duck fat or oil in a wide ffrying pan and saute onion for 3-4 minutes. Add garlic, potato and mushrooms, cover, and sweat for a few minutes. Lift lid and stir well. Saute until potato is tender, mushrooms have started to colour, and there is a bit of a sizzle going on.
* When lentils are tender, tip the fricassee into the lentil pot and add the stock. Bring to a simmer and season to taste. Simmer for 5 minutes. Let cool until warm, then blend in a food processor or blender (do not overfill - you may need to do this in batches). Reheat and serve very hot, garnished with a few fresh herbs and/or a little cream. 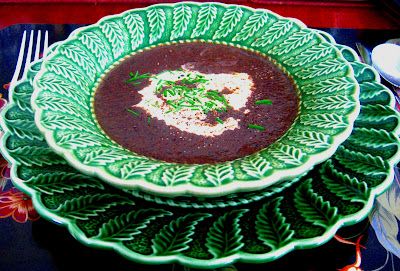 I found this turned out to be a little too thick, so I thinned it down slightly with a bit more stock and water.﻿ I was worried that it might be just too earthy and rich for my dinner guests, but they loved it. And it froze and reheated beautifully for a later lunch.
Posted by AnneE at 11:15 PM 2 comments: 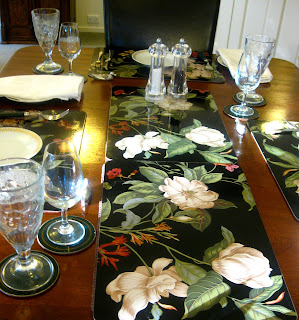 On Friday we commemorated Harvey's birthday in fine style. I knew our mutual friend was bringing some magnificent beef for the main course, and a fine red to go with it, so I decided to splash out on Harvey's favourite entree - a dozen Bluff oysters. With them we had a very dry white Waimea wine I brought back from my trip to Nelson, made from a grape variety I'd never come across before: grüner veltliner.
The oysters, of course, didn't require me to do anything, but it was also my job to come up with the veges to go with the beef. I made a potato gratin using stock instead of milk - it looked gorgeous with its overlapping thin slices, but I didn't take a photo, dammit - and a big yellow pepper, charred over the gas, put in a plastic bag so its skin would come off easily, then sliced and softened in the oven.
These two went very well with the red onion confit I made that morning in the slow cooker. I haven't done it this way before, but it worked perfectly, and it was great to be able to leave it without worrying about it catching and burning. I adapted it from the caramelised onions recipe in Great Ideas for Crockpots and Slow Cookers, by Fiona Willison (2004). 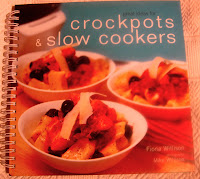 Turn the slow cooker to high and allow it to warm for 20 minutes.
Put all the ingredients in the warmed cooker. Cover and cook for 2 hours on high. Take the lid off and cook for another 2-3 hours until the onions are very soft. Check seasoning and adjust if necessary. 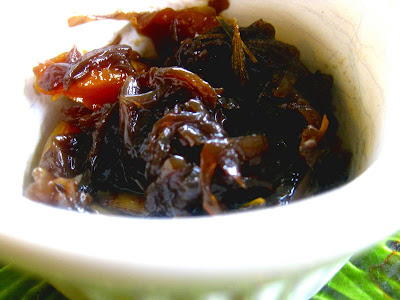 If you have any left over, it's very good warmed through and served on little pieces of toast, either on its own or alongside breakfast bacon. ( I haven't yet tried the amazing recipe on Hungry and Frozen for a kind of "jam" combining bacon and onion, but I can imagine it...)
After all that, we had a suitably restrained dessert brought by another friend - a little cheese, then some delicate orange jellies (the recipe was from What's for Pudding). It was a beautiful evening, and I was grateful.
Posted by AnneE at 9:34 PM 3 comments:

Email ThisBlogThis!Share to TwitterShare to FacebookShare to Pinterest
Labels: onions

Parsnips instead of pudding 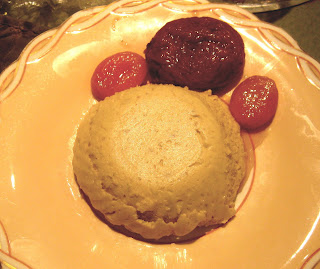 ﻿
Yes, I know I promised a new pudding this week. I did make Alexa Johnston's Bavarian Coffee Cream, otherwise known as Bavarois au Café, but this is how it turned out. It tasted good, but I just didn't make it well enough, so I'll have another go later. I think I need some metal moulds...
But that wasn't the only new recipe I made last Saturday. I got completely carried away and made a new soup and a new vege dish as well. The soup was great but I'll write it up later when I get a good photo - I've got some in the freezer. The veges were marinated and grilled parsnips, yams and peppers. They were meant to be grilled and served as kebabs, but as I was having them with beef that didn't seem necessary - it was much simpler to do them in a grill pan. They looked lovely and their slightly sticky sweetness was good with the tender beef.
Grilled parsnips, yams and peppers
(adapted from Brian Glover, Homes and Gardens Cookbook 1996)

*  Peel and trim the parsnips and cut them into longish evenly sized pieces roughly the same length as the yams, cutting down through the centre of the thickest end.  Trim the yam ends if necessary. Bring a pot of water to the boil, salt it, and add the parsnips and yams. Boil until almost tender. Drain and cool.
* De-seed the peppers and cut into even pieces - about 6 pieces per large pepper.
Place all the veges in a shallow dish.
* Mix the marinade ingredients in a bowl and pour over the veges. Marinade for at least an hour, turning the veges every so often. (I did them in the morning for the evening.) 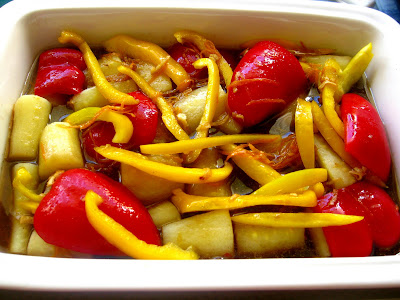 * Turn the grill to high. Use a slotted spoon to lift the veges out of the marinade and spread the pieces evenly in the grill pan. Grill for 15 minutes, turning every 5 minutes and spooning over more of the marinade left in the dish. When cooked, sprinkle with the sesame seeds and put back under the grill for a couple of minutes. 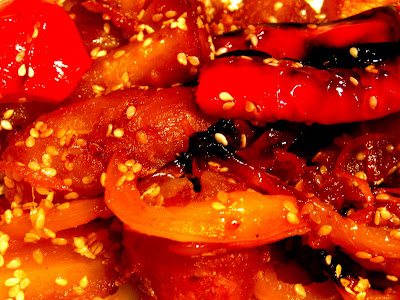 Though we had these with beef, they'd be brilliant with chicken or pork too. They were the first things I cooked in my new oven. The old oven proved, when Julio was here and trying to use it for his baking, that it just wasn't up to the job - well, what else could I expect from a cheap, no-frills teenage Italian? There was a good special on a Fisher and Paykel one that would fit the old space, so I gritted my teeth and went for it.
The good news is that it does seem to cook very well indeed, and of course that's the most important thing. But the controls are another story. They seem to have been designed by someone who has never attempted to use them for cooking in a real-life kitchen. The knobs are so thick (the photo doesn't really show this properly) that they make the already very small numbers and symbols even more difficult to read, and the tiny notch on them that has to be aligned with correct function or temperature is almost invisible (everything shows up better in the photo than in real life, because of the flash). They're also very low - probably designed for wall placement rather than under the bench, though that's where many of these ovens will go. So I have to bend right down to set them correctly, because otherwise I can't see the markings around them. And surely it would be much safer to have assymetrical knobs that showed at a glance if they were off or on? In my next life, I want to be a kitchen appliance designer...

Mystery of the Week: Watching the hype about New Zealand apples finally breaking into the Australian market, and setting aside the fact that a week later, some bright spark left a piece of leaf and a (reportedly dead) insect in a box of them, resulting in a new partial ban, I couldn't help wondering - where did the glossy, crunchy Rose apples shown in the news items come from?
We saw one happy Australian after another biting into these lovely apples which were absolutely nothing like the somewhat soggy, distinctly UN-crunchy Rose apples currently on sale in the shops here. Is it the usual story - all the good stuff goes overseas, leaving locals stuck with the leftovers? And if you go to Oz and try to bring one back, you'll be hit with a $200 fine, so don't even think about it...

News of the Week: Not much cooking going on, because (a) Julio's gone (this sounds like that lovely old Harry Belafonte ballad, "Delia's gone..."), (b) I've got plenty of delicious little scraps in the freezer to eat up, and (c) I'm working very hard on my food memoir, because I want to have it all finished by November at the latest, so it's crunch time. But do not despair.. 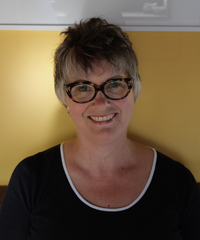 Promise of the Week: NEXT week I'll report on my first attempt to make one of the recipes in Alexa Johnston's new book, What's for Pudding? On Tuesday I went to hear her talk about it at the wonderful Marsden Books, and it was a delightful experience - almost as good as actually eating pudding - so watch this space... 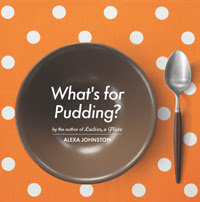