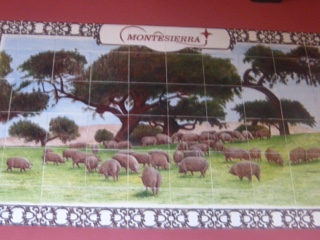 Spanish ham of any kind isn't easy to find in NZ, though On Trays in Petone has Serrano ham - see my earlier post,
http://somethingelsetoeat.blogspot.com.es/2015/08/home-made-spain.html

On my bus (sorry, coach!) tour of Spain, driving the back roads from Seville to Lisbon, we stopped at a family-owned factory producing the real thing, the ham called bellota. It's made from the meat of small black Iberian pigs who feed (free range, of course) exclusively on acorns.  They deal with 30,000 pigs a year, though not all of them produce bellota - some are for Serrano ham.
The process of making the hams is remarkably simple, but the care and control that goes into it is remarkable. Essentially, the fresh legs are first buried in salt - the picture shows this stage set up for visitors, the real thing is the same only much bigger. The salt comes from the coast and can be used several times. 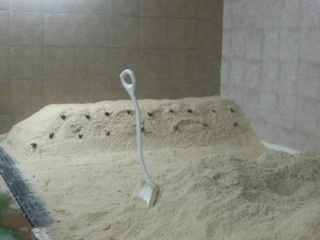 They are then air dried in an ascending series of temperatures. 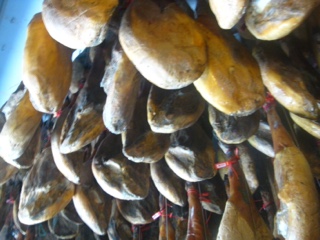 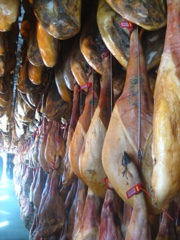 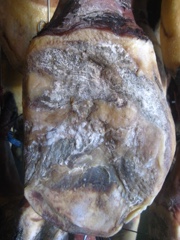 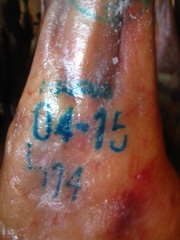 Each leg is individually coded, tracked and tested, and the entire process can take up to four years, as the ham slowly dries and shrinks.  A family will buy a whole ham for Christmas and New Year for several hundred euros, depending on size - the 100g pack of bellota I bought was 10 euros, 100 euros a kilo, but they're cheaper bought whole. You can see rows of hams hanging up in good restaurants and tapas bars. They need no further cooking. Stored and cut correctly, they keep for months.
Every other part of the pig is also used - nothing is thrown away.  Here I am in front of the hams ready to be on sold to wholesalers... 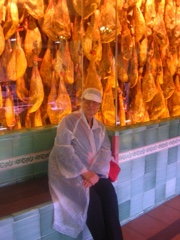 ...and here's the ham on sale in Barcelona's famous covered market.  It is, of course, utterly delicious - a little like prosciutto, but darker and more strongly flavoured. Perfect with a glass of pale, well chilled dry sherry.  Salud! 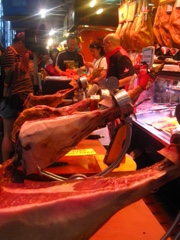 Chocolate and churros heaven in Avila

I can't travel without chocolate. This time I stocked up in Vienna, where every supermarket has a bank of shelves laden with a huge range of options, from very cheap (but still good) to near top of the line. Some of it was for the friends I was to stay with later, and some was to sustain me. My travelling companion there, Ulrike, had of course come provided with her own supply of neat little individually wrapped oblongs, which she not only shared generously with me but gave to me when she left, to add to my store.

I knew all about the famous Spanish morning snack of chocolate and churros, but until yesterday I hadn't had any. I'd been put off a bit by the piled up plates of rather stodgy looking churros and the small cups of chocolate I'd seen other people having. Besides, when I was travelling alone it was too soon after breakfast to eat again, and I was busy doing things in the morning. After that I was fully occupied on my Insight coach tour.

But yesterday, our last day, we came back from Salamanca to Madrid. When we stopped at beautiful walled Avila, Dominic, our very sweet (and incredibly efficient) tour director, told us we were all getting free chocolate and churros there for morning tea.
We arrived just as a fresh batch of crisp, thin churros was delivered. Each table got a plateful, then the waiters came round with big jugs and poured us large cups of rich dark chocolate. I'm so glad I waited - they were perfect bliss. 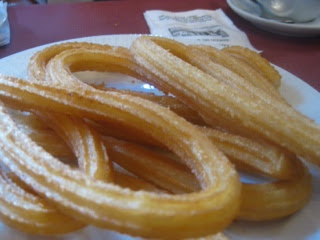 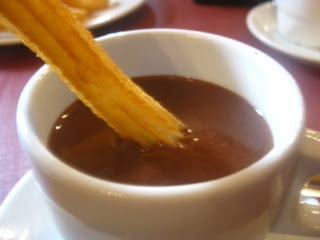 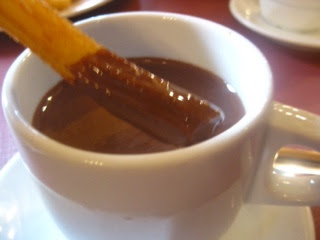