I had a great time in China and ate a huge range of interesting and mostly enjoyable food, but I obviously overdid it somewhere because this week I came down with a very nasty stomach bug. I've only just started to feel slightly better so hope to post properly later this week.
Posted by AnneE at 9:13 PM 1 comment:

Not having cooked many proper dinners since before Christmas, I was very happy to have friends coming for dinner this week. As I'm off to China on Monday, and want to leave at least a scrap of room in the freezer for my housesitter, I decided it would be a good chance to use what I had instead of going shopping. When free range chickens were on special a while ago I cut two up and froze the pieces. But I needed a recipe that involved some kind of marinade, because even when it's fresh, chicken can taste a bit boring. 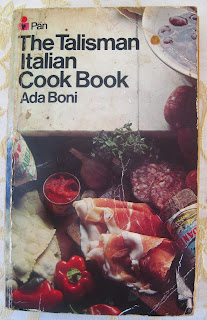 What I came up with was a combination of two recipes from my oldest Italian cookbook, Ada Boni's venerable Talisman, organised so as not to use any flour (one of my friends doesn't eat gluten).
The marinade was from her Pollo frito alla Fiorentina, Florentine fried chicken with lemon and parsley. But the cooking was from her Pollo alla cacciatora, Hunter's chicken, which also uses parsley, as well as onion, garlic , celery and white wine - but no tomatoes, unlike most other versions of hunter's chicken I've seen.

Chicken pieces, trimmed of loose fatty bits and loose bits of skin (4 drumsticks and 4 thighs, all with skin on, is a good combination for 4 people)

For the marinade:
2 Tbsp olive oil
4 Tbsp lemon juice (I used the salty juice from a jar of my preserved lemons)
salt and pepper (I didn't need any more salt)
2 tsp finely chopped Italian flat-leaved parsley
Mix well and cover the chicken pieces with this marinade. Leave for at least 2 hours before cooking.

- Set oven to 180C, fan forced, or 190 without fan. Take chicken pieces out of marinade, shake well and pat them a little with paper towel to dry them slightly. Then, as Ada puts it, "Place in frying pan some olive oil" - or better, use a pan that can also go in the oven.  Fry the pieces in two batches until they are thoroughly browned on all sides. Remove and keep warm.
- Add a little more oil and gently fry the onion, garlic, celery and parsley until soft. Add white wine. Cook for a few minutes to reduce a little, then add the remaining marinade. Check seasoning and add more salt and pepper if necessary.
- Add chicken pieces, put pan in oven uncovered, and bake until chicken is tender and cooked right through, but not dried out - about 35-45 minutes, depending on your oven and how large the pieces are. Baste chicken pieces with the sauce twice during cooking.
- Remove pieces and keep warm while you degrease the sauce - I carefully place a double-folded piece of thick paper towel on the surface to absorb the excess fat, doing it twice if necessary. If there is too much sauce or it seems too thin, reduce it a little on the hob. Check seasoning again 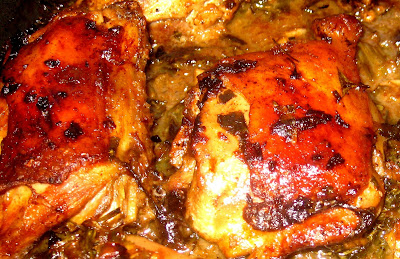 You can either put the chicken pieces back in the sauce, or serve the sauce separately, along with whatever kind of potatoes you prefer. I baked small red-skinned golden-hearted potatoes in a separate roasting tin on a lower shelf while the chicken was cooking - all they needed was a  little oil and salt. We had pieces of preserved lemon with this, and a green salad, with a pinot gris. The light, summery celery/parsley/lemon flavours were a great success (she said modestly). Look for the next post (China!) in late January.
Posted by AnneE at 10:34 PM 2 comments: