Pumpkin soup of the evening

Last time I wrote about pumpkin soup, I gave the link but not the recipe for Balkabagi Corbasi, which Harvey found for us (he loved making and eating soup). Now it's getting colder (well, here in Wellington anyway - I'm a bit tired of hearing "Auckland 25...Wellington 17") and the pumpkins are getting cheaper, this delicious recipe seemed like a good idea.

I had two small round green pumpkins, one from the market ($1.99) and one from the supermarket (99 cents!). They looked similar from the outside, though one was a little bigger, but they were quite different inside - one was yellow and the other deep orange. Together they provided exactly the right weight of pumpkin flesh. It turned out very well, with a good colour and really rich depth of spicy flavour.
The Soupsong site this comes from is one of my favourites. Here's what it says about this soup:
"This Turkish soup is famous in the , near ancient . It's a lovely soup--fragrant, sweet and spicy with a tang...And be prepared to be tantalised by an elusive salaam to classic pumpkin pie."
It's supposed to serve four, but that must be very large helpings. I find two ladlefuls are enough, so for me it serves 6-8.

Heat the oil in a saucepan on a low heat. Stir in the onions, leek, and garlic and sweat, covered, until transparent.
Stir in the spices, honey, and pumpkin, cover, and let sweat together for another couple of minutes.
Pour in the stock, raise the heat, and bring to a boil.
Reduce the heat, partially cover, and let simmer for 30-40 minutes, until the pumpkin is soft.
Puree in a blender, solids first.
Pour back into the pan and reheat (add a little more water if it's too thick).
Season to taste with salt and pepper.

Ladle the soup into bowls. Swirl one good tablespoon of yoghurt into each bowl.

The recipe suggests saving some slices of leek to saute and scatter on top of the soup, but I never do this - I think it tastes better without intrusive bits of green on top. Pepper is good though. 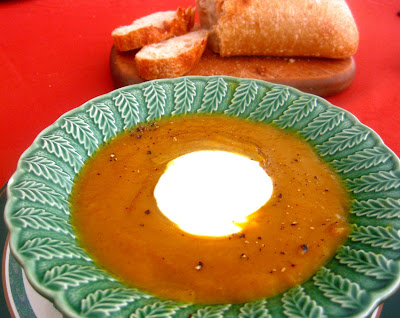 Email ThisBlogThis!Share to TwitterShare to FacebookShare to Pinterest
Labels: pumpkin

Trying to bake a chocolate cake

As I have said before, I am not a baker. But with two guests who love chocolate cake, when I found what looked like a me-proof recipe, I thought I'd have a go.
The recipe came via a friend's food blog, Capital Living, and she got it via Annabelle White, who calls it "Lady Glenorchy's Super Simple Chocolate Cake". It really did look easy. You just put all the ingredients into the food processor in the order given, whizz for one minute, then pour into the prepared tin and bake.
Now that's my kind of cake recipe. But I should have paid attention to the "Cook's Tip" at the bottom:
"Slice this un-iced cake in half and freeze one part and keep the other for immediate use." Because (as I should have known from the list of ingredients) this makes a pretty big cake. So big, in fact, that it only just fitted into my reasonably large processor. And when I poured it into my carefully prepared tin, it came almost up to the top. Oh dear, I thought. Not good. By then it was too late to do anything but bake it. I knew the oven would work best for a big cake like this on "bake", no fan, but I think I should have also set the temperature slightly lower - I'm pretty sure this oven tends to be a little hotter than the dial says. When I checked, the cake was looming up alarmingly in the tin and starting to plop gently over the edge on one side and down onto the bottom of the oven. Not a pretty sight.
I turned the temperature down 5 degrees and left it in until it was cooked through. Once it was cool, I eased it gently out of the tin. It looked rather splendid, a great high domed creation,  a bit of a crest on top but beautifully smooth all round - except for the crumbly bit where it had plopped over and hadn't come out quite cleanly.
Icing covers a multitude of baking sins. I was determined to do this properly, so I found a good ganache recipe I'd cut out of the paper years ago, from Clark's Cafe in Wellington's wonderful central library. I'd never actually made it before, but it looked very simple too. The recipe says "chocolate buttons", but I used Whittaker's Dark Ghana 72%, so I microwaved it first to make up for it melting less easily than the buttons would.

It was the best chocolate icing I've ever made. There was just one problem: after I'd covered my very tall cake thickly in a casual rustic way, filling in the little crater on one side, I had quite a bit left over. Whipping it with extra cream produced a very nice filling. I needed this, given the impressive height of the cake. It was just a pity I hadn't thought to cut the cake in half through the middle and fill it before I iced it...Still, serving the filling alongside the slice meant you got more. My guests didn't complain.
While the cake was good, it seemed to settle and taste even better next day. Next time, I'll get it right. I reckon that for most purposes the recipe would be better halved, and the icing would work neatly with 250ml cream (from a 300ml bottle) and 250g chocolate (the weight of one large Whittaker's block). You might still have some left over, but I'm sure you could cope creatively with that. 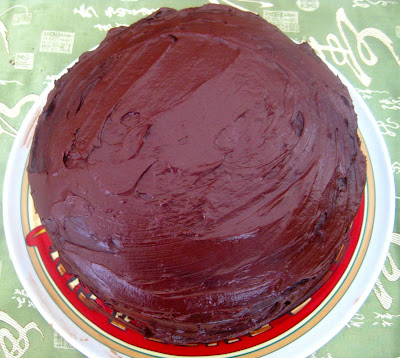 Set oven to 160C.
Grease sides of a 23cm round loose-bottomed cake tin and line base with baking paper [Capital Living's useful instruction].
Place all the ingredients, in the order given, into food processor bowl.  Process for 1 minute.
Bake at 160C for approximately 45 minutes (it might take a little longer, depending on your oven).
Cake is cooked when a skewer in the middle comes out clean.
Cool in tin before removing and ice with your favourite chocolate icing.

Break chocolate into pieces, put in large glass jug, and microwave on low until just starting to soften.
In a small saucepan, bring the cream just to the point of boiling.
Pour it over the chocolate and stir until smooth.
[You need to keep stirring for quite a while - at first the mixture looks pale and unappetising, but the longer you stir, the more it darkens.]

The advice that came with this recipe was excellent. Of course if I'd read it earlier, I would have made the icing before I made the cake.
"If you serve this while it is warm, it is the best chocolate sauce. If you leave it for a few hours [2 hours seemed to be enough], it becomes spreadable and this is when you ice the cake.  When it is at the spreadable stage, if you whisk it, it becomes an airy chocolate filling. If you leave it overnight it will become hard. To soften it again, chop into pieces, slightly warm and stir to combine."
Posted by AnneE at 11:06 PM 3 comments:

Back to the beginning

I've been busy lately writing up recipes to go in the back of my e-book food memoir (cover and title coming very soon). One of the first recipes I put in dates back to when I first started learning to cook - I was about to get married, so I had to learn fast. Luckily I was able to turn to my married friend Frances for help (her mother had been a home science teacher). Here's a tiny advance taste of that chapter:


I had been married barely a month when I asked my favourite English professor, Tom Crawford, to dinner. It all seemed simple enough. The meat would be seventeenth-century pork chops (a recipe from ), spread well ahead of time with a mixture of parsley, chopped onion, oil, salt and lemon juice, and then grilled. With them we would have rice (because potatoes were boring and bourgeois and I often got them wrong) and green beans (frozen, so no problems there).

... The chops weren’t raw but they were rock hard. The rice was gluggy and the beans were grey. Tom bravely chewed his way through it all, keeping up a flow of urbane literary chat.

I did get it right eventually - the secret is to bake the chops instead of grilling them. The other night I made this for my neighbour, who is also called Frances. Here's the recipe.

- Peel onion and grate it into a small bowl. Finely chop parsley and add it to onion. Add lemon juice and 2 tablespoons of the olive oil. Season with salt and pepper and mix well
- At least 1 hour and up to 10 hours before cooking, brush one side of chops with the remaining 1 Tbsp olive oil and place them in a shallow ceramic baking dish, oiled side down. (You can also use a metal dish – this speeds up cooking, but it can also dry the chops out, so keep an eye on them.) Spread onion mixture over their upper sides. Leave in refrigerator until 30 minutes before cooking. 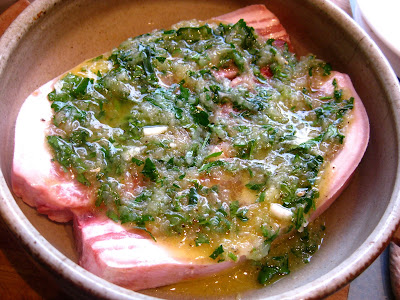 - Preheat oven to 180°C. Place baking dish on rack in middle of oven. Bake chops for approximately 1 hour, until topping is browned a little and a thin knife slides easily into the meat. Lift out and rest on kitchen paper for 10 minutes before serving.

Baked Agria potatoes are good with this. I had two large oval ones, so I scrubbed them well and halved them horizontally, brushed them with oil, sprinkled them with salt, then put them into the oven at the same time as the pork chops, to bake on a lower shelf. 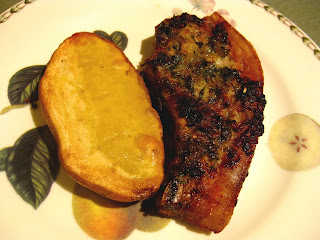 We had a rare treat with our chops: beautiful fresh runner beans from Ali's garden (I haven't got room to  grow them here). I have a neat little bean slicer that works perfectly for them, peeling away the stringy sides. Harvey preferred his beans cut into traditional angled chunks, but I love the thin green ribbons my slicer produces, with slivers of pink dotted along them. A brief steaming is all they need. 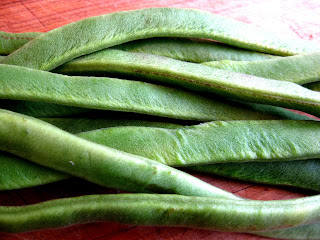 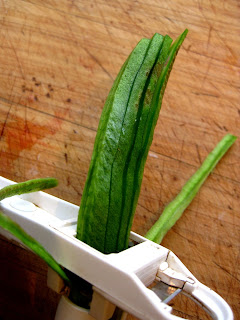 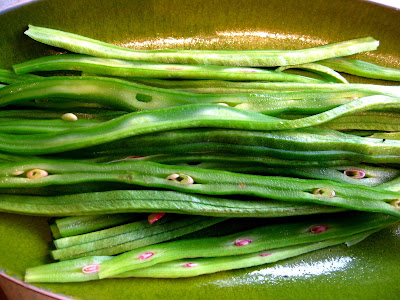 I've just realised: that last post was my 150th since I started this blog in March 2010. Not bad, eh! To celebrate, here's a photo of the very first cape gooseberries I picked from the plant Ali gave me. 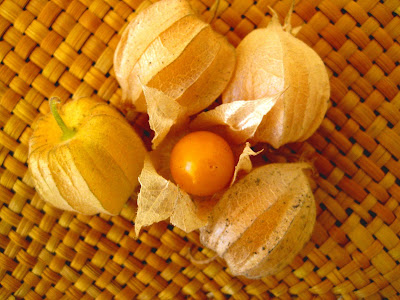