The duck shooting season begins on 1 May. For some time I've had three dead ducks in my freezer. Harvey's brother Bruce is a very good shot, and each year brings down more ducks than they can cope with. So I was the lucky recipient of these.
I've tried various ways of cooking wild duck. The slow cooker method works the best, but it can only cope with one duck at a time, so it's no good for more than two people, given that wild ducks don't have nearly as much flesh on them as domestic ducks.
So I had another scout around the net and came up with a brilliant recipe by none other than Steve Logan and Al Brown of Logan Brown fame. What's more, it required precisely three ducks. I organised a dinner and planned my campaign.

Oh dear - I had this whole post written and saved and then Blogger went awol, wouldn't let me in, and when I finally got back most of it had gone. Now it's 10.30 pm and I haven't the energy to rewrite it all! Have a look at the recipe here. I made duck stock with the carcasses and roasting pan veges instead of chicken stock, used considerably less stock than they say so as not to drown it (maybe they had bigger ducks), and less flour to thicken, and served it with potato and parsnip puree instead of pasta. The consensus: it was magnificent - and even better next day. Hard to photograph, though - here's the best I could do. And now I'm going to bed. 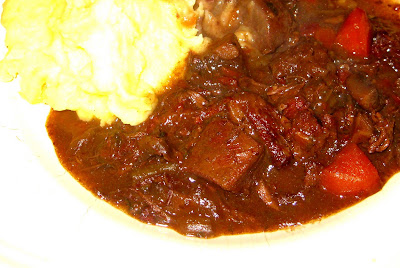 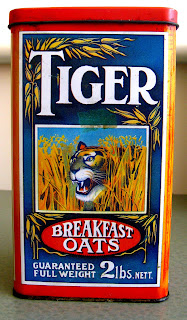 On Saturday morning I decided I wanted to do some baking - a rare event. What could I make with what was on hand? Harvey often used to have porridge, so I made sure there was a constant supply of rolled oats. Our old kitchen had open shelves, and I kept what we used most often in nice-looking tins, preferably ones that matched the contents. (They were hopeless for storing biscuits and crackers, but fine for everything else.)

When I found this great tin in a long-gone gift shop in Willis St, I was really pleased - not only was it perfect for the rolled oats, but tigers were Harvey's favourite animal.

I never eat porridge, and I hate wasting things. So of course the perfect thing to make, especially at this time of year, was - Anzac biscuits.  And yet again I turned to Lois Daish, whose Listener column showed how much effort she put into getting her recipe right. I'd used it before (a long time ago!). Only this time I did it properly and weighed everything out. She points out that "the quantity of golden syrup is thr trickiest variable", so you should make sure you measure out exactly three tablespoons, "with no syrup overflowing or clinging to the spoon".

- Preheat oven to 160C (on fanbake if you have it) and line two baking trays with baking paper.
- Put sugar, flour, oats a nd coconut into a large bowl and mix well.
- Put butter and golden syrup in a small pot over gentle heat until melted.
- Put baking soda in a cup and pour the boiling water over it. Stir until dissolved and add to melted butter and syrup.
- Pour this hot fluffy mixture into the dry ingredients and stir very thoroughly.
- Use your hand to form the slightly crumbly mixture into a mass. Form balls about the size of a small walnut and place onto the lined trays, leaving enough room for spreading. Press each ball lightly with a fork and put in the oven. (A friend told me to dip the fork in water first so it doesn't stick to the biscuits.)
- After 5 minutes, open the oven and you'll see that the biscuits have flattened and puffed up. Give each tray a gentle bang to deflate the biscuits - you may need to do this again after another minute or two. (Actually, mine didn't seem to puff up, but I did make them too big and I think I was a bit light on the flour, they really spread out.)
- Total baking time about 10 minutes."When ready", says Lois, "the biscuits will be a light chestnut brown and will still feel slightly soft when pressed."
- Take out of the oven, leave to cool for a minute or two, then transfer to a rack to harden and cool. (I just carefully lift off the whole sheet of baking paper and put that on the rack with the biscuits still on it.)
- Store in an airtight container. 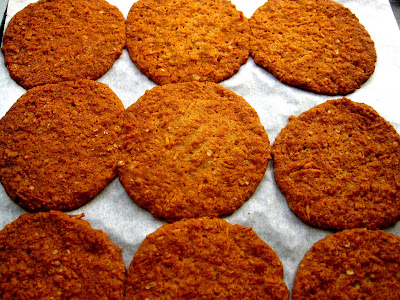 They're thinnish, and a bit too big, but I like them like that. I've been proudly producing them for friends and eating one a day with my coffee. And sometimes another one with my afternoon tea. And  now and then one for dessert, with fruit. So there aren't going to be any left for Anzac Day.
Posted by AnneE at 12:29 PM 1 comment:

Back at the table

When I was in Auckland, a strong-minded friend who lives on her own for most of the week advised me to reclaim my dining table. The thing is, unless we had visitors, I hardly ever used the table in this house before Harvey died, except for dinner. The light isn't good enough to read the paper, so I took to sitting in an armchair near the window for breakfast, and often for lunch as well. Harvey sat at the table if he was having porridge, but otherwise his pattern was much the same as mine - a plate on his lap.

Still, I knew she was right - the table is definitely the best place to eat dinner. So I've now made myself use it again. I'd rather sit at the side than the end, with the table stretching out rather forlornly in front of me, but if I do that I can't see the TV, and as I wrote over on Elsewoman, I need it on for company while I'm eating - it's too quiet otherwise. So this is the best I can do. Notice how I've carefully filled the table up. 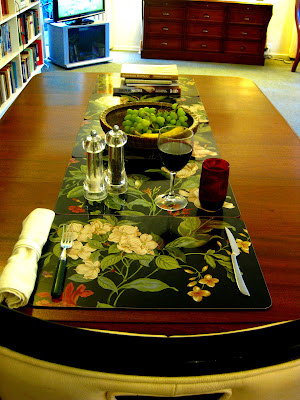 And here's the delicious fish stew my friend served me for dinner at her place - she's a brilliant cook. It's a Lois Daish recipe, "Summer Fish Bowl", from her 2005 book A Good Year. 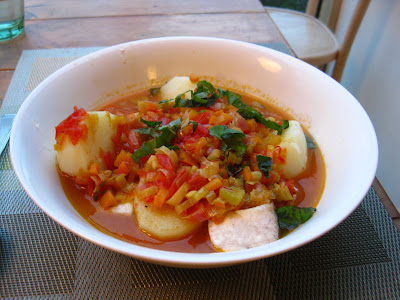 Warm oil in heavy pot, and gently fry onion, carrot, celery and fennel for several minutes, then add garlic. Fry briefly again and pour on the wine. Allow to bubble up for 1-2 minutes.. Add tomatoes, seasoning and thyme leaves. Cook for a few minutes then add liquid and simmer for 20 minutes until everything is tender. Check seasonings. Gently reheat 10 minutes before the fish is ready.

Carefully remove any bones. Place in rimmed roasting pan, brush with olive oil and season. Preheat grill. Slide fish under grill and cook for 3-5 minutes, depending on thickness, until fish is barely opaque right through.  Transfer fish into heated shallow bowls. Pour any juices from pan into pot of sauce.

Check seasonings in hot sauce, add parsley and ladle over the fish. Serve with steamed white rice, potatoes or bread.

Cooking in the Catlins 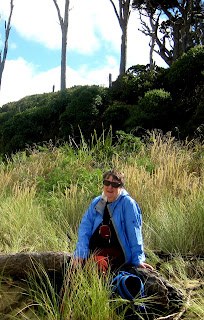 Here I am on the perfect picnic log, at what used to be called Moa Bone Point, on the Papatowai estuary in the Catlins. Walking along the beach, you can see where the sea has eaten into the bank and exposed the layers of ash from the moa hunters' hangi. If you're lucky you might even see a moa bone sticking out (though of course you won't remove it - all such finds are protected).
We picnicked most days, very simply - bread and butter, salami, cheese, fruit - but not till 2 pm or even 3. No rushing, that's the essence of a good holiday. We were lucky - we left Dunedin on a Saturday, so we were able to stock up first at the railway station farmers' market.

Breakfast was fancy organic muesli and fruit, including the rhubarb from the cottage garden cooked up with the wonderfully tart red apples Jenn salvaged from a roadside tree. You can't buy proper cooking apples like these any more. (Apparently everyone has the right to pick fruit from roadside trees growing outside fences or hanging over them - it's called fructage.)

After coffee and one small piece of toast with comb honey, we set off for wherever Jenn had planned. She grew up in the area so I couldn't have had a better guide. By lunchtime, after what seemed to me like a really virtuous amount of walking - to beaches, waterfalls, rainforests - we were ready for morning tea. I'm happy to report that there was no shortage of good cafes. Owaka had giant slabs of carrot cake. Balclutha's indifferent coffee was offset by sensational home-made neenish tarts.  Gore had magnificent date scones and passionfruit yoyos, plus remarkable sculptured latte leaves. The only off-note was the eye-watering $24 we paid for two mochas and two afghans at McLean's Falls. 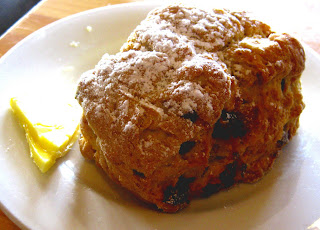 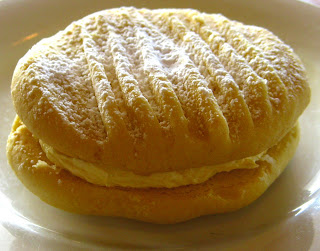 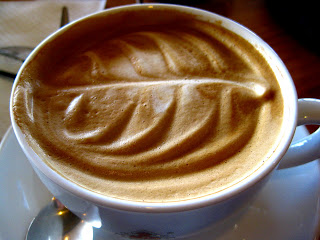 I had offered to take over the cooking, to give Jenn a break after doing all the driving. I really like working out what to make in holiday kitchens, and our Papatowai eco-cottage had all the basics. I think my piece de resistance was the Owaka Four Square's Bluff oysters, followed by a pretty pasta with (frozen) shrimp, broccoli and fresh pale green Italian courgettes (a present from Jenn's friends' Dunedin garden), and a sauce made from the oyster liquid, softened mild fresh onions (another garden gift), lime juice and white wine.... 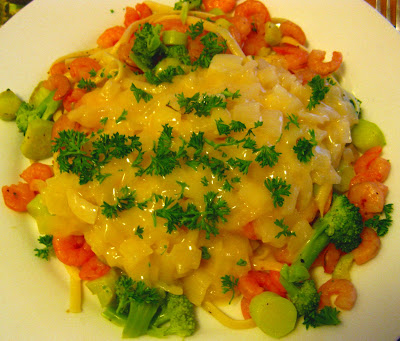 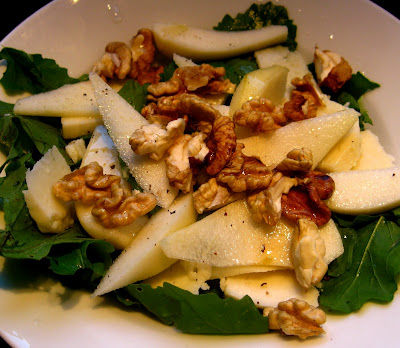 ... and our market plums and sweet little pinot noir grapes, plus a square or two of chocolate, did very well for dessert, priming us up nicely for the nightly Scrabble contest. Once (thanks to two blanks) I got all my letters down - but even so, I only just beat Jenn. 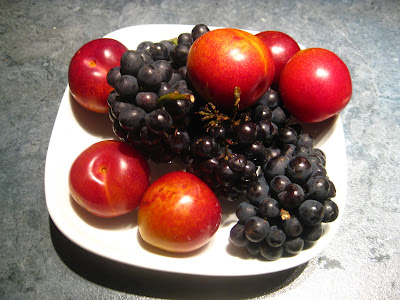