Not fit to eat 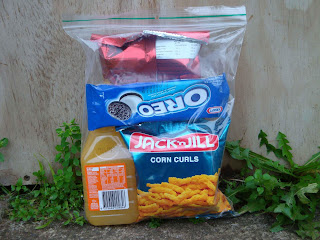 A friend sent me this picture. She found the pack being sold in a South Auckland dairy for $2.50 as a "school lunch". This is what was inside it. 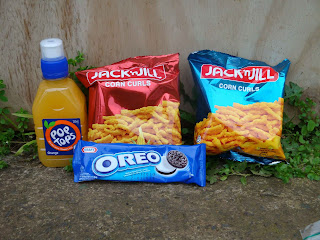 Apart from the Oreos, a US "treat" that used to be unobtainable here, the other three things are all brands I've never seen before. My friend worked out that for $2.50, children get "almost no dietary fibre, 40mg vitamin C, rather more salt than they need, 35% of their daily requirement for simple sugars, quite a lot of fat, and about 25% of their total daily energy needs. That is, they get a lot of empty calories. Of course, they’ll be hungry from the lack of fibre by mid-afternoon, as well as thirsty from all the salt and sugar, but hey! That’s what $1 bottles of fizzy drink are for."
She asked the dairy owner if he was embarrassed about selling this stuff to school children, and he said no, because "it’s what they like". So she asked if he would give this to his own children for lunch. He eventually said no, because "they didn’t like it".
I detested making school lunches, and by the time the boys reached secondary school, I'd given up, I'm afraid. Fortunately in those days their school canteen sold plenty of things that were fine, like filled rolls, and they were old enough to make their own lunches at home if they wanted to make money on the deal. The last government's drive to get schools to sell healthy food was having really good effects by the time this government binned it, along with Fruit in Schools (which heaps of schools had used very successfully for learning about healthy eating).
I don't know what the answer is, but it certainly isn't this rubbish. At least it looks as if that dairy may soon not be able to sell their big brothers and sisters booze.

PS: This post, plus a Child Poverty Action Group Facebook reference to it, was picked up and criticised in a post on the Hand Mirror recently, and got many pro and con comments. It charged me with "promoting a diet mentality" and "food morality". I then put up a post about my point of view, which in turn drew many more comments. You can read these posts and comments here.
Posted by AnneE at 3:39 PM

"At least it looks as if that dairy may soon not be able to sell their big brothers and sisters booze."

And isn't that the best news we've had all week!!

I agree with you whole heartedly!

Unfortunately, working near the Terrace, I can't say some adults really eat good things too! Too many seem to have takeaway coffees and muffins for lunch as part of their regular repertoire, as opposed to wholesome fare?

Also, I wonder if shifting the focus from "What not to eat" to "How to eat" might play a role in helping to shift people's food habits and what their children learn to want.

Thanks for the comments, Fred, Sophie and Mel. I agree that endless "don'ts" around food don't work. But I really wonder how much power any kind of "education" effort has, in the face of the enormous pressures towards fast junk and away from the healthier (and often dearer) stuff.

Hi Anne - I think it's a great post, interesting that it sparked so much debate - it (the lunch pack) is the kind of think I tend to bitch about, but maybe that's showing my middle class privilege (as a single mother, full time student and beneficiary) :)