What I eat when I'm having dinner on my own varies enormously. The one constant is that I try to work out what I fancy in time to produce it that night.
On Tuesday I didn't have much in the fridge. There was some bacon, so I considered spaghetti carbonara, but somehow that didn't hit quite the right note. So I went down to the shops to see what spoke to me, and at Gamboni's I saw their goat's cheese, fromage de chèvre, and some tinned cherry tomatoes. A different kind of pasta, then?
But when I got home I had another idea. How about a light, delicious goat's cheese soufflé? I had a look at the internet and found several recipes, but it was this one that appealed most - especially as I just happened to have a couple of courgettes. From Jan Gardner (who's based at Meola Kitchen in Westmere, Auckland), it was broadcast on Nine to Noon about a year ago.
I've given the original quantities below, but I halved them. That made me one medium soufflé (I scoffed the lot) and two small ones to reheat later as an entrée for my neighbour and me (not strictly proper, I know, but who cares, they still taste wonderful).


Set oven to 180°C and butter 6 x 150ml ramekins (or one large soufflé dish, or two medium ones).
Place 20g butter and zucchini into a medium heavy-bottomed saucepan and sauté for 3 minutes. Remove from heat and place mixture in a sieve over a bowl so some of the excess liquid can drain out.
In the same pan, melt the remaining 60g butter over low heat. Off the heat, stir in the flour. Cook, stirring constantly, for 4-5 minutes.  Whisk in warmed milk and stir until it thickens.
Remove from heat. Stir in zucchini, lemon zest, goat's cheese, cream and Parmesan, and cool for 5 minutes.
Add 3 yolks to mixture, one by one.  Season with salt and pepper and a few gratings of nutmeg. 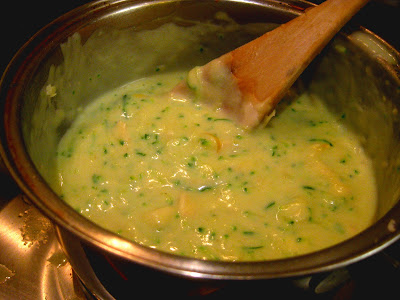 Whip whites to soft peaks, adding pinch of cream of tartar halfway through. (This is the equivalent of beating the whites in a copper bowl - it helps to hold the air in.) Fold gently into mixture.
Place in ramekins or straight-sided soufflé dishes and bake 12-15 minutes until firm and puffed, or longer for larger dishes - the soufflé should be well risen and should wobble only very slightly when nudged.
(If in doubt, I stick a very long, thin, warmed knife blade in to see if it comes out clean. It makes a few dishes, but I washed up while it was cooking, so I didn't have to face them afterwards.)
To serve, gently part the souffle into each portion with two large metal spoons. 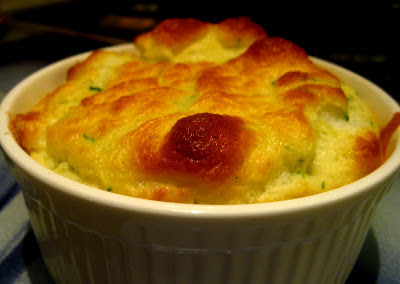 As you can see, my larger one didn't rise brilliantly. I think that was partly because I put in the second egg yolk (halving everything, I was using only 2 eggs), and partly because the eggs were a bit small, so there was less egg white than there should have been to raise this much mixture - especially as it was a bit weighed down with the cheese and zucchini. It tasted wonderful all the same - very light and delicate, but completely satisfying (with a bit of good bread and butter on the side). And with the veges neatly built in, I didn't need anything else - except, of course, a glass of wine.
Posted by AnneE at 9:26 PM