I didn't post last week because I didn't have anything I considered interesting enough to write about. But tonight I made myself such a nice little dinner I thought I'd share it. It can of course be sized up to work for two or three or four, and you can play around with it to suit what you have handy.
What I happened to have was: a nice piece of pork fillet, about 14 cm long and 4 cm thick - just right for me - along with some rich leftover sauce from the slow-cooked chicken I made last week, with apricots,  prunes and red wine, plus 5 rather ancient dried apricots which I'd had the foresight to soak in boiling water the night before, and two softish, longish Jersey Benne spuds, the last of a box.

I looked up The Lazy Cook (Harvey bought it, it was one of his favourites) to see whether I could flash-roast such a small piece of pork.

It seemed to be okay, so I heated the oven to 220C on fan forced, sprayed a small roasting dish with olive oil, and sprayed and salted the pork. Then I followed his suggestion about putting the pork on a bed of the soaked apricots, cut through into their separate halves. 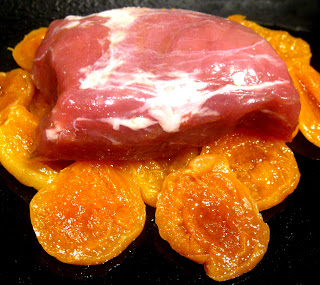 I peeled the spuds, cut them lengthwise into 1/2 cm slices, put them flat on the tin around the apricots, sprayed them with olive oil and put the tin on the top rack of the oven. I cut up some pieces of broccoli to microwave separately. The apricot soaking water went into the sauce, ready to microwave in its Pyrex bowl.
Then I set the table. I bought a new lamp recently, two halogens on a black pole, so I could stand it near my chair. It's always felt a bit too dim sitting there by myself, so the extra light was just what I needed to persuade me to eat properly, instead of having a tray on my lap.
The Lazy Cook recommends 12-15 minutes for each inch of thickness. But when I tested the pork it was nowhere near the proper temperature in the middle - it should be 70C/160F, you certainly don't want rare pork. So I turned the potato slices and put it all back for another few minutes, while I cooked the broccoli and heated up the sauce. Then I took the tin out, checked the temperature and let the pork rest while I warmed my plate in the turned-off oven (with the potatoes on it to keep hot). It's these very small things that make all the difference, even when it's just for me. 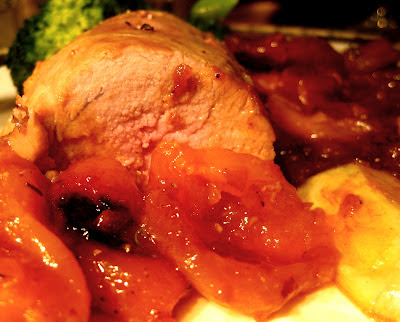 So here it is, and it was absolutely delicious from start to finish. Well, the first slice was a tiny bit dry (it's been cut off already in the photo, as usual I started eating before I remembered to take one), but the rest of it was perfectly moist, marvellous with the apricots. The potatoes worked really well too, I wasn't sure if they'd cook that fast or maybe burn, but they were fine. I felt I'd taken good care of myself.
Posted by AnneE at 9:25 PM

It sounds absolutely delicious. I love apricots with anything, and the pork sounds lovely too.

Lovely to read this blog and the Elsewoman one.

Every time I cook pork it's rather dry but my sister-in-law cooked a lovely tender, juicy piece in her pressure cooker when we were in England recently. Yours looks lovely too - time to try again, perhaps?