The exclamation mark in the heading is because this is the first time I've made any kind of preserve since around 2005, when we were still in Farm Road. But both Jonathan and I are very keen on home made chutney. Usually I pick up jars of it at various fairs. One day I asked the nice lady who sold jams and chutneys at the little Karori Sunday market if she ever made kasundi, a delicious Indian chutney I'd found at the big annual Save the Children fair at Homewood. A couple of weeks later she turned up with two different kinds, tomato and eggplant. But with no fairs and no markets, we were running very low.

On the phone to Lesley, I talked about wanting to try making some chutney, but not having any handy surplus produce to make it with. She pointed out that I did: I had my magnificent set of four rhubarb crowns in a big pot. The originals were given to me by Ali some years ago. They somehow managed to survive my inconsistent, cack-handed care, and this year all four are flourishing better than ever.

I hunted around on line and found various recipes, but I wanted something I knew would work. My Auckland friend Rosemary, who regularly embarks on chutney and pickle making, passed on her recipe, so I used that. It's different from the others because you don't put the sugar in until near the end of the cooking, but I could see why: doing it this way makes the mixture less likely to catch and burn.


Rosemary’s rhubarb and ginger chutney
Slightly adapted, and with two quantities, depending on how much fruit you have. I think it would also work well using some firm pears or nashi. For the smaller quantity, I used about 10 sticks of rhubarb weighing around 700g, four small apples, and one and a half large onions. 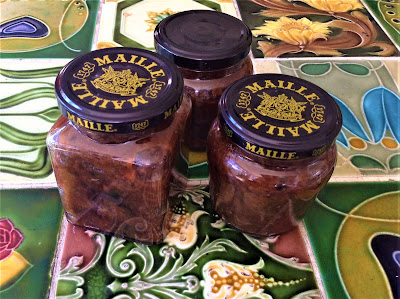