A few festive fruit ideas for Christmas and the holidays

On Christmas Day it will be ten years since Harvey died. I've been going back through my posts for this time of year, recalling all the different Christmases and holidays I had with him, and then without him, and reminding myself what we and our friends were cooking and eating.

For Harvey, Christmas meant a roast, which he would cook, although over the years we shifted the timing from late lunch to early dinner. All we needed to decide was what kind of roast - pork, lamb, beef fillet, or ducks - and what would accompany it.

Befores varied a lot, depending on who brought them - often seafood appeared. Afters could also vary to some extent. Usually one of our regulars would bring her always splendid choice of what we all knew as the Light Dessert, but every so often someone else stepped in, with a different repertoire.

The final course was fixed: Edmonds' Rich Christmas Pudding, made by me in November. The only problem was that it had to be steamed for another two hours before we ate it. After all the food and wine I'd had by then, I had a bit of trouble remembering to put it on in time, or making the brandy sauce without sloshing in too much brandy.

Now each year is different, depending on circumstances and how Jonathan and I feel. I unearthed a pretty good selection of ideas for delicious afters involving the season's wealth of fruit. So I thought I'd gather some of these together, as they might give you some inspiration too.

First up, strawberries - really good this year. Harriet Harcourt showed me how to make the most of their colour, shape and flavour by cutting them into little heart-shaped slices and drying them in the oven. The taste is essence of strawberry. 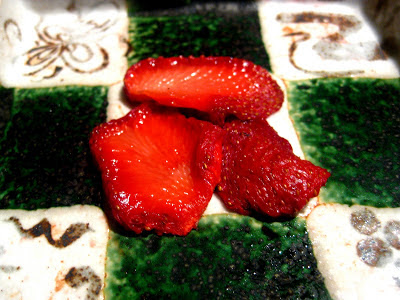 You can use them in lots of ways. Here they are piled up on toasted panettone for a superb breakfast. 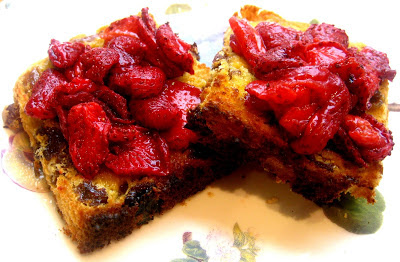 By the way, leftover panettone, should you manage to have any, makes the best bread and butter pudding in the world.

I regularly supply my neighbour with cooked rhubarb for his breakfast, but this week he got the Christmas edition: rhubarb with strawberries. It's a brilliant combination, especially with ice cream. 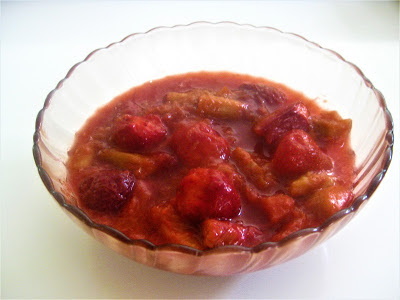 Then there are cherries - again, extra good this year. I had never eaten any until Harvey bought some for us. On our first holiday together we went down to Central Otago and spent a blissful morning up in the trees, picking them ourselves, and of course eating them as we went. Except for my 10-year-old son Patrick - when he came down with his haul, he asked us tentatively if he could eat one. So we sent him back up the tree for the little treat he'd missed.

Of course they're perfect as they are - but you can do some stunning things with them too, such as making that very simple French classic, clafoutis, or just cooking them in red wine. 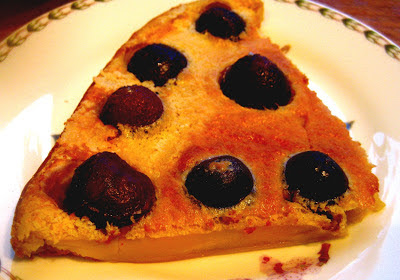 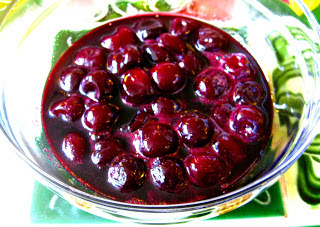 That post with the cherries in red wine also shows how blueberries (I found them on a good special this week), cooked in red wine and balsamic vinegar, make a superb relish for ham (or turkey).

As a final flourish, here's a simple way to produce little fruit mince tarts with less sugar than usual - although in honour of Harvey, I always lace the mincemeat with a good dash of whisky first.