Gingerbread in the house

Friends have begun dropping in for pre-Christmas visits, and we're really enjoying seeing them. But this also means I need to have something good in the tins to offer them.

The traditional offering is Christmas cake, but I have to confess I've never made one. The boys, of course, would happily devour any kind of cake. Chris loved it, so I was grateful that his mother Marion made a small test cake each year, then gave it to us. We would get a slab of my mother's cake as well. Marion's was beautifully traditional, dark and fruity. Mum had this persistent delusion that sherry was just as good as expensive brandy, and she threw in generous sploshes of it, so hers tended to be paler and rather damp - though it was good heated up a bit, with custard.
As I've said before, I'm no baker, and bought baking is either really expensive or not very nice. Or else it tastes okay until you read the label and realise it's full of strange numbered substances and nasty cheap butter substitutes, such as palm oil and beef fat.
So last year I was really pleased with myself for coming up with the idea of gingerbread. I had a great recipe from my New Plynouth friend Beth that I'd never tried. It was perfectly simple and worked beautifully, producing deliciously sticky, spicy, fragrant gingerbread that kept well through the Christmas visiting season. And apart from the ones who couldn't eat anything with flour in, everyone liked it, including Harvey - ginger is one of his favourite flavours. Given a choice between Christmas cake and gingerbread, he'll go for the gingerbread every time.
I made it again this week. The mixture is, as Beth warned me, extremely wet, but don't let that worry you.  It just takes quite a while to cook. I used two loaf tins this year, giving me deep slices which work well cut in half. On the whole people seem to prefer having two (or more) small pieces than one (or more) big ones, and it's a bit crumbly, so smaller slices are easier to manage. You'll see that mine sank a bit in the middle - I probably took it out of the oven a bit too soon. But it still tasted really good.

Esther's gingerbread
(via Beth - Esther is quiltmaker Esther Woollaston, who has also worked for Ruth Pretty).

* Preheat oven to 150C. Line a 23 cm square tin or two loaf tins with baking paper (I folded mine double). To get a gingerbread which is less deep, and is very nice cut into square chunks, you can use a rectangular tin instead, or even a roasting dish.
* Sift the flour into a large bowl, together with the brown sugar, baking soda and baking powder, and all the spices. Stir lightly to mix.
* In a small saucepan, melt the butter and golden syrup together.
* Lightly beat the 2 eggs.
* Add the golden syrup and butter mixture to the dry ingredients, followed by the eggs and the milk.
* Combine everything well, using a wire whisk, and pour into prepared tin(s). The mixture will be very wet. 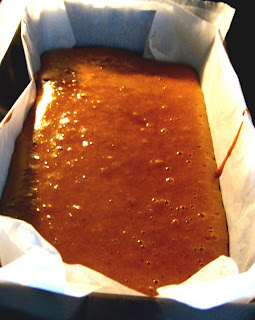 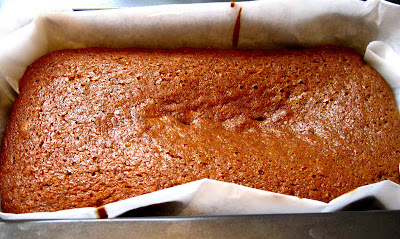 * The original recipe says to bake it for at least 45 minutes for one square tin, and at least an hour for two loaf tins. For the rectangular tin, I give it 40 minutes on bake, then another 15 minutes on fan bake.
* Bake until a skewer inserted in the middle comes out clean.
* Leave in tin(s) to cool for at least 30 minutes before turning out.
* When completely cool, place in an airtight tin or plastic box.

I like a milkless cup of spiced chai tea with this, but it's good with coffee too. 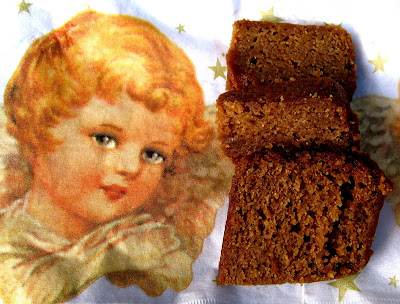 Email ThisBlogThis!Share to TwitterShare to FacebookShare to Pinterest
Labels: gingerbread

I really think Esther's gingerbread is THE BEST gingerbread recipe - spicy and sticky as gingerbread should be. I recently made gingerbread using a different recipe and it just wasn't as good!

oh yummy, yummy. I am a baker and that looks fab!