Turning into the Christmas Grinch

The pork is ordered, the Jersey Bennes are bought, and the pudding is in the fridge. But just in case anyone out there was under the illusion that Everything is Going Jolly Well around here, here's the naked truth. 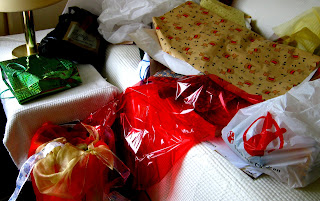 And once again I have failed to produce anything like the number of delicious, impressive home-made Christmas gifts I had intended to make. Even the hamper for my sister had nothing home-made in it, except the card.  One person - one! - is getting some macaroons. That's it.
Merry Christmas!
Posted by AnneE at 5:25 PM

Email ThisBlogThis!Share to TwitterShare to FacebookShare to Pinterest
Labels: Christmas

My sympathies, Anne. Let's try to think in terms of Happy Holidays, instead.
And since I was persauded only this morning from taking my laptop with me to the beach, a holiday is exactly what I intend having, and raspberries to Christmas.